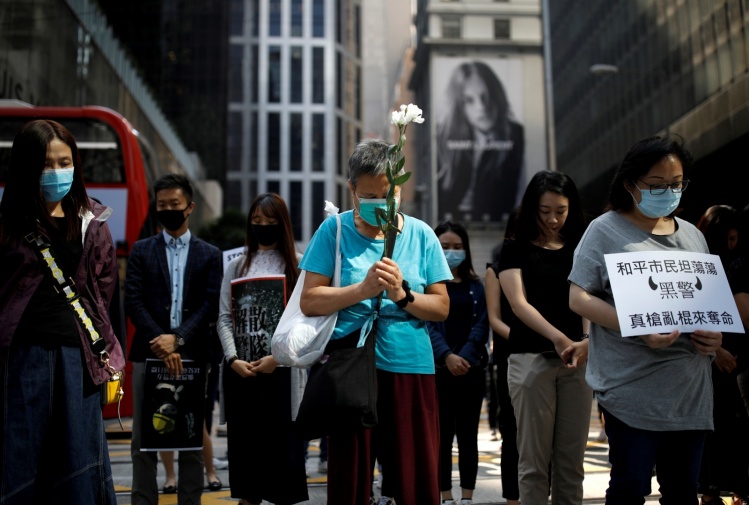 Protesters in Hong Kong have worn masks for months as they seek to defend democracy (Ahmad Masood / CNS).

I was stopped by the police in the city center of Hong Kong one early evening. “Sir, why are you wearing a facemask? Are you going to a protest?” “No,” I nervously replied, “have you not read the news? There is this new SARS thing in China.” The police seemed to have found my response reasonable enough and let me go after searching me and checking my identity. That was early January, weeks before Hong Kong confirmed its first case of the coronavirus. I never expected, just over two months later, that COVID-19 would be declared a global pandemic by the World Health Organization, that the virus would spread from mainland China all the way to the remote Scottish town where I work, that all my teaching would have to go online, or indeed that the outbreak would put 20 percent of the global population under lockdown.

Until a recent second wave of infections—the result of Hong Kong expats returning home from abroad—Hong Kong has had a surprisingly low infection rate in comparison to many countries in the West, despite its proximity to mainland China. A number of experts and media commentators have suggested that the people of Hong Kong, as well as those of some other nearby countries, learned an important lesson from the 2003 SARS outbreak, which began in southern China and soon spread to Hong Kong, where hundreds died. In the wake of that epidemic, rigorous early-warning protocols were adopted by public-health authorities. And the public, still traumatized by the memory of SARS, were eager to comply with these protocols.

But perhaps the lesson the people of Hong Kong learned from 2003 is not limited to new strategies for coping with contagious diseases emerging from China. 2003 was also the year that marked a new era in Hong Kong’s political history and its pro-democracy movement. That July half a million people protested against the adoption of article 23 of the Hong Kong Basic Law, worried that it would give Beijing more direct control over Hong Kong. Indeed, starting in June 2019, long before all the strenuous hand-washing and social distancing, many people in Hong Kong had already been wearing surgical facemasks like the one I wore in January in order to attend rallies and demonstrations without being recognized by the police. For many supporters of Beijing and the Hong Kong Police Force, wearing a facemask in 2019 meant that you were a supporter of the pro-democracy protests, if not a protestor. The association between facemasks and protest was so strong that the Hong Kong government even implemented an anti-mask law in October 2019, only to be overruled later by the courts.

The common, almost universal wearing of masks that has helped control the infection rate of the coronavirus in Hong Kong is partly a sign of distrust of both the local government and Beijing. That distrust was heightened when the Hong Kong government, ignoring the advice of many local doctors and medical professionals, allowed thousands of people from mainland China to cross the border into Hong Kong every day during the period of total lockdown in Wuhan (a lockdown later extended to Beijing and Shanghai). As many in Hong Kong see it, it was not the government but the city’s civil society that came together—drawing on the momentum of the protests—to stop the spread of the coronavirus. On the surface it may seem that the Hong Kong protests have been put on hold as people practice social distancing and avoid mass gatherings, but for many in Hong Kong’s civil society the fight against the virus is very much a continuation of the city’s resistance movement. The universal mask-wearing that has proved so effective in curbing contagion started well before the pandemic as an act of protest against the government’s decision to ban civil servants from wearing facemasks in February. Even more noteworthy, it has been Hong Kong’s civil society that has donated masks and other medical products to health-care workers and vulnerable citizens when the government’s stockpile proved woefully insufficient.

There is an important difference between “the collective good” and what the Christian tradition means by “the common good.”
sharetweet

Hong Kong’s fight against the coronavirus is in this way quite different from mainland China’s. Some have praised the effectiveness of China’s more autocratic method of suppressing contagion. In an article in Prospect magazine, the epidemiologist Elizabeth Pisani suggested that “the discipline of public health inherently prioritises the collective good over individual freedom” and that “the rest of the world should be grateful” to China for its heavy-handed response to COVID-19. But perhaps there is an important difference between what Pisani calls “the collective good” and what the Christian tradition means by “the common good.” Whereas the collective good is quantitative and crudely utilitarian in its calculus (e.g., the total number of lives saved versus the number of lives sacrificed), the common good is one that unites a community in qualitative or even spiritual terms. As John Milbank and Adrian Pabst put it, “the common good is not the total mathematically measurable good…but is, rather, concerned with the truest goods that we share together.” In the case of Hong Kong, although much of the religious and often explicitly Christian elements of the city’s 2019 protests became less visible as the social movement evolved, there is still a sense in which much of Hong Kong society has been united by a common quest for such “truest goods,” including freedom and democracy.

In China, individual freedom is systematically, and often coercively, subordinated to the collective good. In Hong Kong, by contrast, citizens have come together voluntarily to help each other through a difficult time—a communal display of reciprocal care and support that echoes Pope Benedict XVI’s description of “the common good” in Caritas in veritate: “It is the good of ‘all of us’, made up of individuals, families and intermediate groups who together constitute society. It is a good that is sought not for its own sake, but for the people who belong to the social community and who can only really and effectively pursue their good within it.” Unlike a calculative “collective good” which may come at the expense of the weakest and most vulnerable in society, the common good is by definition concerned with the good of everyone in the community.

With the implementation of lockdowns and quarantines across the world, many are understandably concerned about the possible overreach of governmental authority. One thing Hong Kong’s example can show the world is the important role of civil society in the fight against this virus. Facing the challenges and dangers posed by the coronavirus, one cannot simply rely on (or blame) those in authority; it is crucial that everyone be willing to play his or her part in the common effort to protect those who are most vulnerable to the virus. As Hong Kong demonstrates, it is not only crucial; it is also possible.

For more on Hong Kong & the coronavirus, listen below to a conversation with Jeffrey Wasserstrom on the Commonweal Podcast.

King-Ho Leung is a research fellow in philosophical theology at the University of St. Andrews in Scotland.