By Greer Hannan
The Last Word 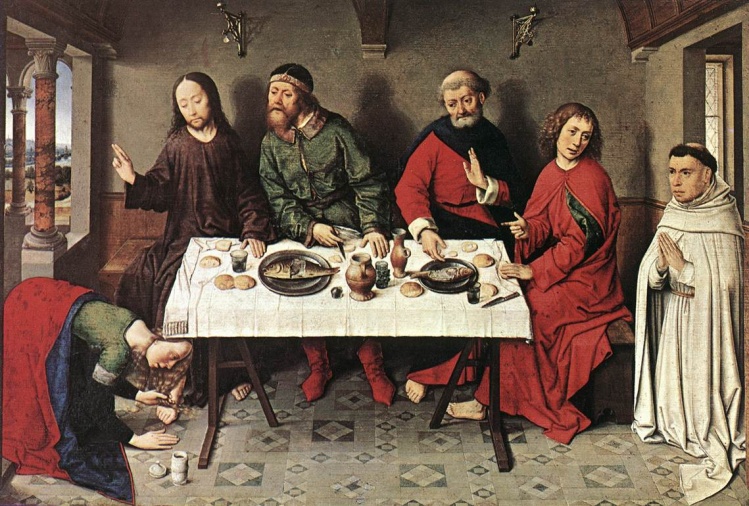 Christ in the House of Simon / Dieric Bouts

As you reach the buffet, someone asks whether you want sauce on your roast, whether you want salad, then a third volunteer puts silverware and a napkin into your hand. You take your plate and find an open dining-room chair, except that the dining room is old St. Paul’s Catholic Church, where the altar has been replaced with tables, and the meal is a eucharist of a different kind.

Shelter residents come from the former parochial school next door; families come from the Section 8 apartments across the street; the agency’s staff trickle in from offices around the campus of Louisville’s Society of St. Vincent de Paul. Everyone finds respite from the heat, the noise, the hustle. The room’s vaulted ceilings are illumined with bright, gem-toned light streaming through the stained-glass windows. Each is illustrated with a Gospel scene, Jesus moving through this world, getting his hands and feet dirty in the business of those who are poor, or sinners, or disconsolate. One especially striking window depicts Mary Magdalene on her knees, her cascades of blond hair sweeping the floor. She is washing Jesus’ feet with her tears.

For its first millennium, the Western church held the pious belief that Mary Magdalene was not only the person who first saw the risen Lord (initially mistaking him for the gardener); she was also the sister of Martha and Lazarus of Bethany and the penitent sinner who washed Jesus’ feet in Luke’s gospel. But modern scholarship rejects that conflation, instead recognizing that Mary Magdalene, Mary of Bethany, and the unnamed repentant sinner are three distinct individuals. It also repudiates the charge that Magdalene led a licentious life before her conversion, dismissing the rumors of her promiscuity as patristic embellishments.

Yet in setting the record straight, we perhaps lose the depth and tenderness of the encounters between Magdalene and Jesus. Those who hold the church’s ancient, pious belief witness a profound friendship unfold between them. Magdalene keenly feels that her sin has wounded Jesus—her remorse pours forth in tears—and in his great compassion, he allows her the exquisitely intimate gesture of washing his feet with her tears, drying them with her hair, and kissing and anointing them. She sits at those same feet and listens as he teaches in her house in Bethany, while her sister Martha fusses to provide hospitality; their friendship even grows strong enough that she can challenge him in grief and anger over the death of her brother Lazarus. She reaches out to draw the resurrected Christ close when she encounters him outside his tomb and realizes that he is truly risen.

And one more scene comes to mind: at the Last Supper, at that first Eucharist, Jesus kneels to wash the feet of his disciples, echoing the washing that Magdalene first undertook for him. Then he tells us to do likewise.

Magdalene keenly feels that her sin has wounded Jesus, and in his great compassion, he allows her the exquisitely intimate gesture of washing his feet with her tears
sharetweet

One of the privileges of working with people who are homeless is that it has given me a chance to follow Jesus’ injunction literally. I remember in particular a man who had arrived at the overnight shelter with painful wounds on his feet. He had cut them the previous night, and after a day of walking the streets, they were swollen and infected. So I washed them, anointed them, with a tube of antibiotic ointment rather than an alabaster jar of pure nard.

These people, this place, and that stained-glass image of Mary Magdalene have taught me that a holy life is a life of tenderness. It may not be a life of moral perfection, or right belief, or spiritual epiphanies, though these are genuine goods. Magdalene—as the ancient church perceived her—sincerely repents of her sins and resolves to do better; she listens to and contemplates Jesus’ teaching; she has seven devils cast out of her. But she also struggled with demons and passed through dark nights, teaching us that doubt and struggle persist even for those who have seen resurrection. Moral, intellectual, or emotional certainties are always elusive, and, anyway, they aren’t why Magdalene was canonized. The sanctity of her life is fundamentally embodied in her attentiveness to Jesus and the tenderness of her actions.

I spend most of my days in an office, balancing budgets, reviewing regulations, and writing reports, not washing feet. When the peace of our meal in old St. Paul’s is inevitably shattered, I remember that poverty has a way of bringing out the worst in people. In those moments it is hard to feel patient or cool-headed or hospitable. But her image in the window reminds me to move with humility and grace. It reminds me that in every moment and in every act, in the midst of turmoil, confusion, and grief, it is always possible to wash and kiss his feet

Greer Hannan, MNA, M.Div., is the Grant Compliance Coordinator at the Society of St. Vincent de Paul in Louisville, Kentucky.