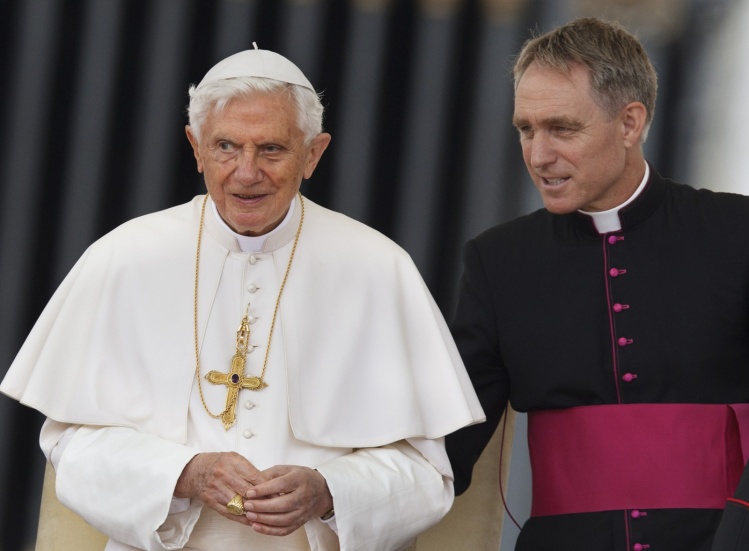 “Avoiding Lessing’s Ditch”—the title of an excellent, still-unpublished dissertation by Kathryn Johnson on the biblical exegesis of nineteenth-century Anglican divines—could just as well describe Pope Benedict XVI’s most recent book, the second installment of Jesus of Nazareth. Lessing’s ditch takes its name from the German poet and philosopher Gotthold Lessing, who viewed historical and metaphysical truths as separated by a gap that could never be bridged, because (he insisted) one cannot argue from historical events to any necessary truths. How, then, to relate the Jesus of historical-critical research to the Christ of Christian faith? The attempt to separate the “Jesus of history” from the “Christ of faith” only serves to deepen Lessing’s ditch, because the Jesus of history is as contingent as any other historical event. One therefore believes in the Christ of faith on other grounds, presumably—for example, the authoritative proclamation of the church—or on feelings or other subjective experience. This is not a promising way to relate historico-critical research to Christian faith.

Is there another way? Is it possible to avoid Lessing’s ditch by refusing to separate the “Jesus of history” from the “Christ of faith” in the first place? A hint in this direction was thrown out years ago by the priest and biblical scholar Raymond Brown, who said that of the possible Jesuses one could imagine, the least likely to be the “real Jesus” was the “historical Jesus”—presumably because that Jesus is a shifting historical construct, doomed, we can add, to remain on one side of Lessing’s ditch. In Jesus of Nazareth, Pope Benedict develops Brown’s hint, and with it, the prospect of avoiding the infamous “ugly ditch” altogether.

Jesus of Nazareth is easy enough to read, but no one should underestimate the difficulty of what Benedict is attempting or the sophistication with which he does it. The book sets out to “discover the real Jesus” not by starting from either the “Jesus of history” or the “Christ of faith”—that is, the codependent pair of figures defined by existing on opposite sides of Lessing’s ditch—but rather by attending to the figure of Jesus in the texts of the New Testament, especially in the Gospels. It does so using what Benedict in his introduction calls a “properly developed faith-hermeneutic...appropriate to the text,” and combining that with a “historical hermeneutic, aware of its limits, so as to form a methodological whole.” This “methodological whole” is the rejection of Lessing’s ditch. It is meant to correspond to the way in which the texts’ figure of Jesus presents the reader with a mystery so irreducible that if one attempts to subtract from it a “Christ of faith” in an effort to find a pure “Jesus of history,” neither of them will recognizably remain.

With regard to the multitude of scriptural citations and allusions in the narratives of Jesus’ crucifixion and death, for example, Benedict notes the deep interweaving of the event itself with the word of God. “The facts are, so to speak, permeated with the word—with meaning; and the converse is also true: what previously had been merely word—often beyond our capacity to understand—now becomes reality, its meaning unlocked.” If you remove “word” from “event,” dissolving the mystery, you no longer have the mystery; but you no longer have the event, either—or Christian faith. “The harmony between word and event not only determines the structure of the Passion narratives and the Gospels in general,” Benedict writes, “it is constitutive of the Christian faith.” Benedict is aware of theories that hold that the Passion narratives are simply constructed as a tissue of biblical citations, but he insists that “it was not the words of Scripture that prompted the narration of facts; rather, it was the facts themselves, at first unintelligible, that paved the way toward a fresh understanding of Scripture.” And thus, we might add—if word and event are deeply interwoven—toward a discernment of what actually did happen, what the events actually were.

“Mystery” as Benedict uses the term suggests an event that takes place in history, yet at the same time transcends history, and so opens itself to human understanding only gradually. In Jesus of Nazareth he refers to the Passion as “a mystery that defies analysis in terms of our rational formulae,” one that contains “the darkness and irrationality of sin and the holiness of God, too dazzling for our eyes.” Again, if you take away the “mystery” of the Cross, you also lose the “event.” It becomes a different event, and the Jesus of that event is not a “historical Jesus” over whom the church has superimposed its “Christ of faith,” but just a different Jesus altogether. Furthermore, this is a Jesus that one “believes in” just as much as the Jesus the Gospels proclaim, for Lessing’s ditch presumably prohibits jumping across from any “Jesus of history” to any “Jesus of faith,” whether that is the Christ of Christian belief or the merely human Jesus of atheism. The “Jesus of history,” it turns out, is himself always some kind of “Christ of faith.”

The emphasis on “mystery” in Jesus of Nazareth does not mean that historical research is irrelevant, since a mystery is a mystery partly because it is indeed an event in history. Benedict is very forceful on this point. “If the historicity of the key words and events could be scientifically disproved,” he asserts, “then the faith would have lost its foundation.” Accordingly, the book is filled with references to the results of historical research. “The important thing for us,” Benedict states, “is to ascertain whether the basic convictions of the faith are historically plausible and credible when today’s exegetical knowledge is taken in all seriousness.” Positive proof, however, is not necessary or even possible. Whatever historical traces a mystery may leave should be defensible through historical research, but the mystery, the event itself, is always more than its historical traces. Credibility, in the end, comes not only from the persuasiveness of historical research, but from the consensus of testimony from a variety of New Testament sources. In this way, Benedict seeks to give life to a method that he correctly notes has “scarcely been attempted thus far”—namely, a method, recommended in chapter 12 of Vatican II’s Dei verbum, based both on historical research and the “analogy of faith,” meaning the proclamation of Christ as given in the entirety of Scripture.

Jesus of Nazareth is replete with brilliant insights. The chapter on the Ascension narratives astonishes with the light it sheds on an event that confounds many modern readers. The subtle yet unpretentious use of patristic exegesis is truly brilliant, as is the implicit demonstration that some of the moves of patristic exegesis, most especially Augustine’s claim that it is Christ who speaks in the Psalms, are rooted in the way the Gospels use the Psalms and related texts. The treatment of Jesus’ prediction of his betrayal; the careful and respectful treatment of all things Jewish, especially rabbinic exegesis and the issue of a mission to the Jews; the demonstration of the connection between “the gospel tradition and the basic elements of Pauline theology” on many points; and the sumptuous treatment of the synoptic apocalypse and of the Resurrection: all testify to the richness of Benedict’s theological exegesis. This is a book that deserves reading and rereading.

It is worth noting that Benedict does not claim to have perfected this method of combining a faith hermeneutic and a historical hermeneutic, but simply to have taken a “significant step” in that direction, in an attempt to help recover biblical scholarship as a theological discipline without abandoning its historical character. Following this pioneering lead would involve not only emulation, but development, and some questions that are only briefly touched on in this book—such as what would constitute sufficient historical credibility, and how a theological consensus in the earliest traditions might affect our answer—would need to be more thoroughly drawn out.

In the meantime, perhaps it is best to close with Benedict’s call for a biblical scholarship that will “require of us a readiness not only to form a ‘critical’ assessment of the New Testament, but also to learn from it and to let ourselves be led by it...to let our own ideas be purified and deepened by [Jesus’] word.” Isn’t this the same as saying that a theological exegesis is one that will interpret the text, culturally mediated though it must be, as if it really were the word of God?

Related: Peter Steinfels and Jack Miles on the first volume of Jesus of Nazareth

John C. Cavadini teaches in the Department of Theology at the University of Notre Dame, where he is also McGrath-Cavadini director of the Institute for Church Life.