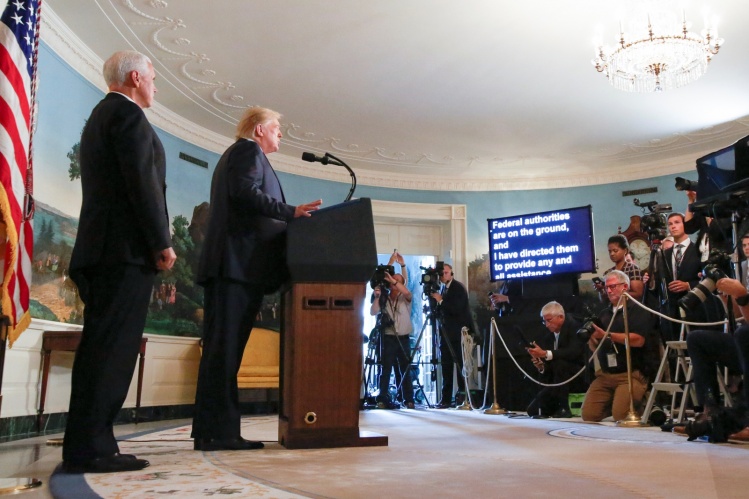 An elected official’s declaration that “Hate has no place in our country” would normally be routine, a self-evident response to mass murders. But for President Donald Trump, it amounts to a flip-flop; for he has not only subtly encouraged hatred, but openly advocated it.

The most glaring example was the May 1, 1989 advertisement he placed in four metro New York dailies to assail the black and Latino teenagers arrested in the brutal rape of a white jogger in Central Park—the youths who were infamously convicted but later exonerated after serving prison sentences. He paid money to say:

Mayor Koch has stated that hate and rancor should be removed from our hearts. I do not think so. I want to hate these muggers and murderers. They should be forced to suffer and, when they kill, they should be executed for their crimes.… Yes, Mayor Koch. I want to hate these murderers [note: the victim was not killed] and I always will. I am not looking to psychoanalyze them or understand them. I am looking to punish them.

Trump’s ad has often been cited as evidence that he is racist; it returned to the news this year when it figured in the plot of Ava DuVernay’s docudrama on the Central Park Five, When They See Us. But in retrospect, the ad also gives an early glimpse of Trumpian politics: the developer was stirring hatred in a racially tense New York City to undermine Edward Koch’s attempt to win a record fourth term as mayor. Trump, at the time a major donor in New York City political campaigns, had been feuding with Koch for several years. Koch had turned down Trump’s demand that the city subsidize NBC’s move from Rockefeller Center to the giant Television City development Trump envisioned for the Upper West Side waterfront. “Piggy, piggy, piggy Donald Trump,” Koch needled, each word sticking in Trump like a banderilla. Trump struggled to compete with Koch in exchanging tabloid insults; no one other than the comedian Don Rickles was better than Koch at this game.

The words of a president penetrate much deeper into the nation’s psyche than the tabloid taunts of a celebrity builder known for his divorces.
sharetweet

For Trump, the personal and the political fused. With an election approaching, he looked for ways to get even. He announced that he was considering spending $2 million to oppose Koch’s reelection, which he didn’t do. Instead, he signed on as the co-chairman for the first fundraiser of the man reputed to have the best shot at beating Koch: Rudy Giuliani, who four months earlier had stepped down as a corruption-busting U.S. attorney who commanded investigations that exposed deep wrongdoing in the Koch administration. Trump’s attack on the Central Park Five was also a political attack ad aimed at Koch, who was portrayed as too weak to hate criminals.

“Time was when people who sent hate letters had the shame to keep themselves anonymous,” the great columnist Murray Kempton wrote in New York Newsday. “Donald Trump dresses his hatred up as though it were a peacock's feathers.”

And Trump kept at it. In an interview with Larry King on CNN, he quoted himself telling a reporter who asked about another rape case, "Of course, I hate these people. And let’s all hate these people because maybe hate is what we need if we're going to get something done.”

Trump also found entrepreneurial uses for hatred. In one of his lesser journalistic moments, in 2009 Matt Lauer interviewed Trump, his daughter Ivanka, and his son Donald Jr. on NBC about Trump’s NBC show The Celebrity Apprentice. This gave the network a chance to let Trump boast about the stars who had appeared on the show—and how much some of them hated each other:

Lauer: So this is not just television hatred, this is—this is just till death do us part hatred.

Yes, “serious stuff,” as in the professional wrestling antics that Trump championed at World Wrestling Entertainment, where the president is a proud member of the Hall of Fame. That show thrives on a supposed hatred between the combatants, so intense that it’s contrived to be more than “just television hatred.”

Trump returned to his appreciation of the power of hatred when he was asked in another CNN interview about President Barack Obama’s chances for re-election in 2012. “Right now, the level of animosity, the level of almost hatred for our government by our people is unbelievable,” he told Wolf Blitzer in 2010, noting the rise of the Tea Party protests. “And I’m sure you’ve never seen anything like it, and I’ve never seen anything like it.”

Not long afterward, Trump went to work stoking that hatred by using his celebrity to advance the bogus “birther” theory that Obama was foreign-born and thus an illegitimate president. As a candidate and then as president, he hasn’t specifically called for hatred, but he has suggested it in numerous ways reported over and over in the news media. And that is sufficient to get his message across: the words of a president penetrate much deeper into the nation’s psyche than the tabloid taunts of a celebrity builder known for his divorces.

Often, Trump and his followers project that hatred on their critics. Recent example: Trump claiming that “the Squad,” four progressive members of Congress, “hate our country.” He has blamed “the Fake News” for “division and hatred.” Meanwhile, the list of far-right assailants who found inspiration in Trump continues to grow.