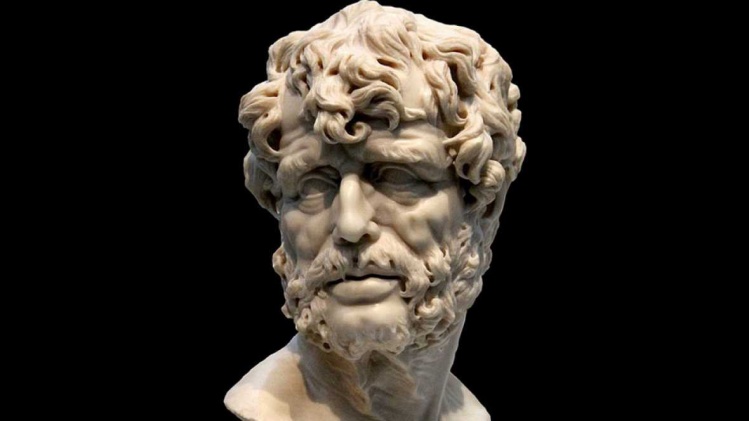 The market for bilingual editions of ancient Greek and Latin books is dominated by the Loeb Classical Library series from Harvard University Press, the iconic green and red hardbacks (often simply called “Loebs”) that have helped generations of classics undergraduates untangle Cicero’s convoluted syntax. At their debut in the last century, Virginia Woolf, writing in the Times Literary Supplement, called Loebs “a gift of freedom” because, by placing Latin and Greek texts opposite their English translations, these volumes recognized “the existence of the amateur.” Nowadays these attractive volumes appeal not only to the philological laity but also to those for whom books are objects to be seen and not read. Loebs have even appeared in the glossy photographs of Martha Stewart Living—what better way to round out a living room’s red color scheme than with a “1930s Chinese Chippendale-style fish tank” and a few crimson editions of Ovid?

Princeton University Press, then, is entering a competitive publishing niche with its new series of similarly portable and stylish hardcover books, “Ancient Wisdom for Modern Readers.” That’s not to say there isn’t room for improvement from the current offering of Loebs. By presenting “the timeless and timely ideas of classical thinkers in lively new translations” from first-rate scholars, Princeton’s collection will be helpful for readers looking for updated renderings of these canonical texts. Although new and updated Loeb editions still appear every year, some of the translations are ancient, even for centrally important works from classical antiquity. The Loeb of Cicero’s De Amicitia, the work translated in Princeton’s new How to Be a Friend, was published in 1923, and the Loeb of Epictetus’s Handbook, part of Princeton’s How to Be Free, is now ninety years old. For Loebs that need a refresh of idiom and style, Princeton is doing Woolf’s amateur classicist an overdue favor, especially because these two new Princeton volumes in particular also include the original ancient texts facing the translations.

But other volumes in the Ancient Wisdom series depart from the Loeb model: they tuck the Latin away in the back of the book, they chop up various ancient sources and splice together selections into thematic chunks, and they interweave interpretive summaries throughout the volume’s pages rather than allowing the texts to speak for themselves. None of these organizational choices is necessarily bad, of course, especially if Ancient Wisdom doesn’t see itself as a replacement for the Loeb Classical Library. And it doesn’t. Instead of aspiring to be a liberating resource to those with small Latin and less Greek, Princeton’s series emphasizes approachability in its mission statement: “Enlightening and entertaining, these books make the practical wisdom of the ancient world accessible to modern life.” This functional angle is reflected in the titles of the books. Princeton offers us How to Die by Seneca, not Moral Letters by Seneca, and How to Win an Argument by Cicero, not On the Ideal Orator and On Duties by Cicero. Rather than demand that Princeton’s new volumes succeed by the standards of another series, we should instead evaluate them as the instruction manuals they claim to be. What advice do they give? In what capacities and toward what ends is this advice helpful?

The emphasis on accessible applicability in the Ancient Wisdom series succeeds when it allows a modern editor to present technical subjects without the burden of unabridged source texts. In How to Win an Argument, James May combines selections from a number of Cicero’s speeches and rhetorical treatises as a way to introduce some terms, controversies, and methods used in the Roman courtroom. In one set of passages on “Rhetoric and Truth,” for instance, May pulls from Cicero’s De Inventione and De Officiis in order to illustrate the ancient conflict between persuasion and philosophy—the former sometimes seen as a clever method of deception, the latter as an unadulterated search for truth. By quoting Cicero’s recommendations to avoid “being overly scrupulous about defending a guilty person” and “to defend what is similar to the truth, even if it be less than the truth,” May himself concludes that “our notion of granting every defendant a fair trial has at least some of its foundation in Cicero’s way of thinking.” This ancient genealogy of modern legal intuitions forces us to consider whether and when we expect lawyers to hide the facts. By extracting some of the most potent passages from Cicero’s many works, May sketches some of the enduring problems surrounding persuasion, compiling not so much a mechanical instruction manual as a launch pad for serious intellectual exploration.

Similarly stimulating is the volume How to Die, edited and translated by James Romm, which highlights some of Seneca’s reflections on suicide and the inevitability of death. Romm’s introduction makes no effort to conceal the foreignness of ancient Stoic beliefs. He points out that Seneca understood freedom and health to be good things only insofar as they permit “one to keep one’s thoughts and ethical choices in harmony with Logos, the divine reason that, in the Stoic view, ruled the cosmos and gave rise to all true happiness.” Like May’s “best-of” sampling of Cicero, Romm’s volume sifts through Seneca’s many letters, tragedies, and assorted prose works and collects the most gripping sentences. Modern how-to books are never as arresting as Seneca’s instructions for dying: “Just as we ignore the clippings from our beards and hair,” the mind should learn that the body “matters as little to it as the afterbirth does to an infant.”

The editors of the Ancient Wisdom for Modern Readers series do a disservice when, in an effort to cater to modern readers, they toss out the ancient wisdom altogether.
sharetweet

Other Ancient Wisdom volumes fall short, however, by following a model closer to the Loeb series, providing full texts while eliminating running commentary. In How to Be Free, a translation of the Stoic philosopher Epictetus’s Handbook and selections of his Discourses, A. A. Long uses his introduction to clarify some of the technical language in Epictetus’s text. The Stoic concept of freedom, for example, “is neither legal status nor opportunity to move around at liberty. It is the mental orientation of persons who are impervious to frustration or disappointment because their wants and decisions depend on themselves.” Interweaving Zeno of Citium, the founder of Stoicism, and Isaiah Berlin, Long sketches a Stoicism far richer than the banal imitation currently enjoying cultural interest—especially among the life-hacking Silicon Valley set, where Stoicism often means “If words hurt it’s because you let them,” or “Find the joy in improving yourself,” or simply “Life is change.” After its helpful introduction, however, How to Be Free pushes its fledgling Stoics out of the nest. The rest of the volume prints a wall of intimidating Greek on every verso page, and there are no intermittent commentaries, like those found in May’s and Romm’s thematic sections, to explain Epictetus’s arguments.

How to Be a Friend repeats these mistakes: no commentary outside the introduction, prodigious amounts of Latin throughout, no judicious grouping with, say, selections from Cicero’s letters to friends. The volume does a disservice, moreover, by reducing Cicero’s text to ten bromides about ancient friendship that have no more intellectual depth than a kitchen mat advising “Live, Laugh, Love.” Here, Cicero’s meditation on the nature of friendship evidently boils down to maxims like “Make new friends, but keep the old” and “Friendships can change over time.” (May’s volume, too, includes a platitudinous “Ciceronian Cheat Sheet for Effective Speaking” that advises a speaker to “know your audience” and to keep in mind that “eloquence is a powerful weapon.”)

It is of course laudable to make the ideas of antiquity more accessible to a modern audience, especially for those who have never had the opportunity to study ancient languages, which are now rarely taught outside expensive private schools. But the editors of the Ancient Wisdom for Modern Readers series do a disservice when, in an effort to cater to modern readers, they toss out the ancient wisdom altogether. Rather than reduce Cicero to “Friendships can change,” we should instead ponder moments in Cicero’s text that startle us out of our passivity and presentism. Consider his lamentation that “people in this world see nothing good in anyone unless that person can somehow profit them—as if they were buying cattle,” or his reformulation of friendship as “nothing other than agreement with goodwill and affection between people about all things divine and human.” In such passages, How to Be a Friend is provocative rather than merely didactic.

Still, How to Be a Friend and How to Be Free may be of interest to Woolf’s “amateur classicist” who prioritizes facing translations; the Loeb edition of De Amicitia needs a refresh, and How to Be a Friend is a suitable alternative. Long’s new Epictetus could replace or at least complement the nonagenarian hardback currently available from Harvard University Press. Less relevant to the needs of the academic classicist, May’s How to Win an Argument and Romm’s How to Die nevertheless excel in their greatest-hits approach to curating texts. It’s worth investigating each volume, then, before purchasing. In any case, my real reservation is not about the organizational inconsistency of the series, but about its occasional distillation of ancient texts into soulless banalities that flatter and reinforce our twenty-first-century sensibilities. If Cicero merely anticipates contemporary truisms, we might as well leave his works on the shelf, where they can at least draw out that fish tank’s understated redwood hues.

How to Be a Friend
An Ancient Guide to True Friendship
Marcus Tullius Cicero,
translated by Philip Freeman
Princeton University Press, $16.95, 208 pp.

How to Die
An Ancient Guide to the End of Life
Seneca the Younger,
edited and translated by James S. Romm
Princeton University Press, $16.95, 256 pp.

How to Win an Argument
An Ancient Guide to the Art of Persuasion
Marcus Tullius Cicero,
selected, edited, and translated
by James M. May
Princeton University Press, $16.95, 288 pp.

How to Be Free
An Ancient Guide to the Stoic Life
Epictetus,
translated by A. A. Long
Princeton University Press, $16.95, 232 pp.