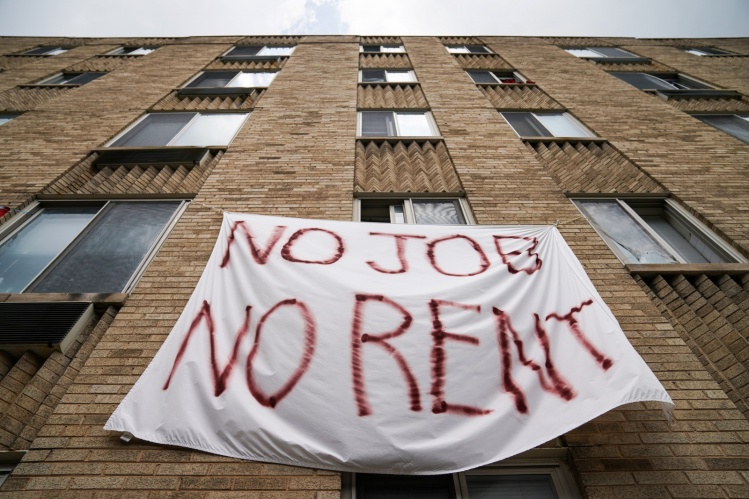 Residents in Washington push for the cancelation of rent Aug. 20, 2020, during the coronavirus pandemic. (CNS photo/Sarah Silbiger, Reuters)

Negotiations between Congressional Democrats and Republicans for a second relief bill collapsed in early August, with each side blaming the other. In May the Democrat-controlled House had passed the $3.5 trillion HEROES Act, which would extend an extra weekly unemployment payment of $600, provide rental assistance and mortgage relief, expand the food-stamp program, and help fund state, local, and tribal governments. But the act went nowhere in the Republican-controlled Senate. Meanwhile, White House Chief of Staff Mark Meadows and Treasury Secretary Steve Mnuchin countered with a $1 trillion package that would reduce the employment enhancement to just $200 and include tax cuts and liability protections for businesses. House Speaker Nancy Pelosi and Senator Chuck Schumer offered to compromise at $2 trillion, but Republicans turned them down, anxious about the national debt. As of this writing, no deal appears to be forthcoming.

In the meantime, President Donald Trump, who was absent from these negotiations, has circumvented Congress with a series of executive actions: freezing some federal tax collections, increasing unemployment insurance by $300 per week (with an additional $100 to be contributed by states), and deferring collection of student-loan payments, as well as encouraging the Department of Health and Human Services and the Centers for Disease Control to “consider” an eviction moratorium. Trump claimed these actions would “take care, pretty much, of this entire situation.” But it remains unclear whether these measures are constitutional, and whether they would actually relieve Americans’ financial distress or merely defer it.

For tens of millions of people, the pandemic has meant more than just having to work from home or not being able to go to a restaurant. It has meant serious deprivation.
sharetweet

Fortunately, there was no such conflict over the first pandemic relief bill, which passed in March. The CARES Act’s $600 unemployment enhancement has been a lifeline to millions of Americans. Its eviction moratorium provided stability in a time of uncertainty. Its emergency funding for hospitals and state and local governments allowed vital institutions to continue functioning. And its Paycheck Protection Program kept millions of small businesses alive.

Even so, the largest aid bill in U.S. history was ultimately inadequate to meet the needs of millions of Americans in crisis. The one-time checks that went to lower- and middle-income Americans were intended to boost spending and stimulate the economy, but they were more often used to pay off debts. Funding for state and tribal governments was earmarked only for coronavirus-related spending, which meant that many states whose tax revenues had dried up because of mass unemployment were forced to choose between reopening their economies too soon or going broke. Many of them decided to reopen—and saw spikes in new COVID-19 cases almost immediately. As for the eviction moratorium, it applied only to buildings financed by federally backed mortgages, and thus protected only about 28 percent of rental units throughout the country.

Even before the pandemic arrived, many Americans were on the brink of financial ruin. The public-health emergency and ensuing economic decline have now pushed some of them over that brink. For tens of millions of people, the pandemic has meant more than just having to work from home or not being able to go to a restaurant. It has meant serious deprivation: not enough food, too many medical bills, the loss of a business, the prospect of losing one’s home. Lawmakers must provide these Americans with basic economic security for as long as the crisis lasts. At a minimum, this will require consistent unemployment benefits, protections from eviction and foreclosure, affordable childcare, and the guarantee of safe working conditions. It will also have to include more funding for state and local governments, so that they can continue to provide basic services. Without such major interventions on the part of the federal government, the harm caused by the pandemic itself will likely be surpassed by the worst economic crisis in a century.