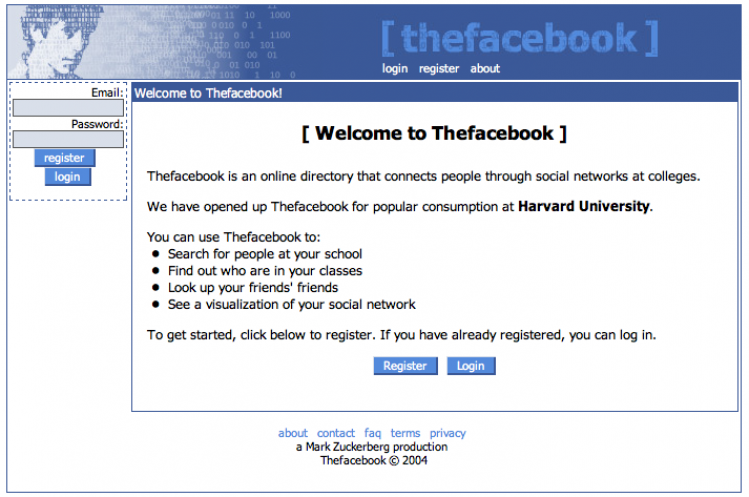 On Facebook this morning I learned today is Facebook's eleventh birthday. In 2004, Mark Zuckerberg and his college buddies (one of whom now owns the new New Republic, which, according to Mollie is having a good, and also retrospective, week) began one of the world’s first social networking sites. The idea was to help those on their way to college see who their classmates would be before they got there. Formerly [thefacebook], it was an exclusive website: you’d only be able to apply with a .edu email address. In my high school it was a rite of passage: you got into college, you got to be “on Facebook.”

Then in 2005, when I was 16, it opened to “non-college networks,” and those included high schools. At first it wasn’t popular to join. Only the “online nerds” did, just because they could. I remember all the girls on my cross country team decided we each wouldn't join until we got a .edu email address, to preserve the “tradition.” If someone joined before that we’d say they “sold out.” By senior year, we each had our own profile page. There are photo albums of cross country races we uploaded to share with each other still available on Facebook today.

In 2006, when anyone with a valid e-mail address could use Facebook, it was an encroachment on a private internet world populated by the curated identities of teenagers—an invasion of you and your friends. The prospect of Mom and Dad seeing the person you were “online,” the pictures you post (or pictures posted of you), the music you said you liked, the words you used in your comments...this was horrifying. The combination of Mom, Google, and Facebook…you didn’t have time to answer all of those questions. You didn’t want her “in your business”: in your journal, in your room, in your backpack, and on your Facebook.

Saying “no” to Mom wasn’t anything new, you’d had practice since you were 13. But when “Aunt Linda said her feelings were hurt because you’re not her friend on Facebook,” everything started to get complicated and you unwillingly had to accept that Facebook wasn’t just for you. Everything began changing rapidly as more and more users joined. Events, Likes, Apps, Games, Pokes, Cover Photos and all sorts of other features appeared. When “Pages” came on the scene in 2009, businesses began marketing their brands, restaurants their menus, and magazines their content in users’ newsfeeds. That’s when Commonweal joined. The first post, on July 31, 2009, was about Cardinal Walter Kasper addressing the Lambeth conference.

By the way, have you liked Commonweal on Facebook yet? Everybody’s doing it.

The first time the word “Facebook” appears in the Commonweal [digital] archives is in a 2008 TV review of “Mad Men” by Celia Wren, then in its first season (This year will be its last. The show moves fictionally from March 1960 to 1969.)

“Marketing has become the lifeblood of American culture—“ the Mad Men review begins. Still true: there are all sorts of settings on Facebook designed to build a “successful marketing campaign” for anyone who wishes to. There is Facebook Ads manager, where you can pay to have your posts “boosted” and shown more frequently to a targeting audience (Can you guess ours? Let me know.) Facebook Insights then track how many clicks those posts are getting and who’s clicking—the "pulse" of an audience.

…Mad Men almost seems to offer a new mythology of our cultural heritage—a glimpse back at a time when electronic marketing was carving out the niche it now occupies in the collective psyche. One day we’re smoking and sipping Scotch while watching a televised Jacqueline Kennedy stroll through Camelot; the next we’re choosing our elected officials—and fine-tuning our own identities—with the help of blogs, podcasts, and Facebook.

Blogs, podcasts, and Facebook are arguably markers of generational divide, at least in the ways they are consumed. Facebook wasn’t something I grew up with, but it was a part of my adolescence, and it never felt quite right. No matter. Now it's is in my hand, on my iPhone. I look at it every day, so much so that I’ve subscribed to a podcast called New Tech City that is conducting what they call the “Bored and Brilliant" project--a week of challenges to help reduce the amount of time spent on a smartphone per day. On Sunday, I spent 117 minutes tapping the screen of my phone. Yesterday, 60. Progress! Today’s challenge is to “delete that app,” that app you use the most. According to the Facebook comments on the Facebook post posted by New Tech City’s Facebook page, the most challenging app for people to give up is Facebook. Here’s to (reality) many more years.