Government by the Reckless, for the Wealthy 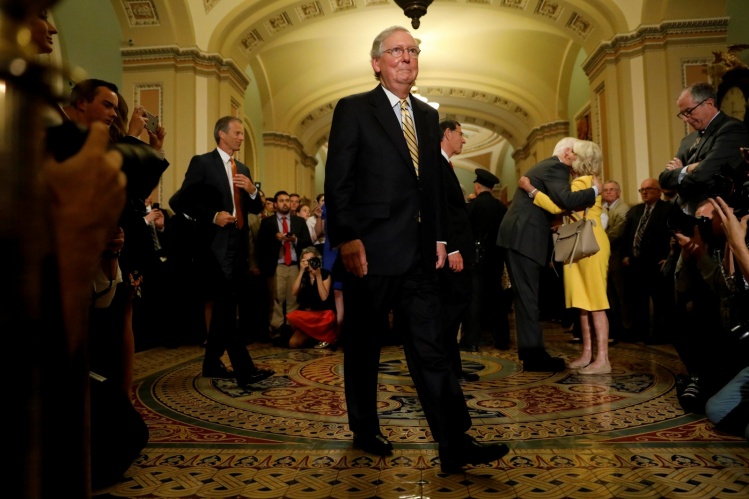 Students often leave term papers to the last minute, but even college freshmen would never submit as finished work an essay with changes illegibly scrawled along the side.

Republican senators hold themselves to a much lower standard. They voted in the early morning hours on Saturday to reorder large parts of the American economy on the basis of a bill that those freshmen would be ashamed of. It was a thrown-together reactionary mess forced through with little forethought and virtually no debate. Key, supposedly “moderate” Republican senators endorsed the massive piece of legislation even before they knew what was in it, and voted down a motion to put off a vote at least long enough so they might actually understand what they were doing. Legislating has routinely been compared with sausage-making, but this time, Republican leaders wanted to keep citizens from knowing what poisons they were injecting into this particular sausage.

When Congress did truly big things in the past—the Affordable Care Act, the major tax cuts of the Ronald Reagan and George W. Bush eras, the tax increases under Bill Clinton and Barack Obama—there was serious discussion over an extended time.

Debate and careful negotiation over trade-offs in a genuinely bipartisan context were at the heart of the success of the last comprehensive tax reform in 1986. By contrast, the GOP's extravaganza this year is entirely partisan, full of breaks for favored interests and punishments for those the party regards as its political enemies. To call it “reform” is an affront to generations of good-government advocates in both parties.

To call it “reform” is an affront to generations of good-government advocates in both parties.
sharetweet

Moreover, this tax monstrosity is so filled with gimmicks, carve-outs, and penalties for various sectors of our economy that its impact will be far greater than the Republican tax cuts of the 1980s and early 2000s. Those voting for it gave little thought to how it will affect many sectors of American life. This is exactly what its sponsors wanted. Scrutiny was this bill's greatest foe.

Besides pumping up already dangerous levels of economic inequality, the bill will add at least $1 trillion (and probably much more) to the debt at a moment when adding to deficits serves no useful economic purpose. This, in turn, could lead to interest-rate increases that will dampen whatever positive effects the tax cuts in the bill will have on growth. Oh yes, and Republicans will soon be using the new red ink they manufactured on behalf of the privileged to justify sharp cuts in Medicare, Medicaid, and programs for the needy.

The bill will undermine our system of higher education, which is one of the great prides of our country. What sense does it make to provide relief to heirs who did nothing to earn their inheritances other than be born—while increasing taxes on graduate students, whose incomes are already modest? Isn't there a near-universal consensus that investing in the skills of our people and in research is the way to foster growth and future well-being?

By tearing away the deductibility of state income and sales taxes, this legislative concoction could plunge some of our largest states—California, New York and New Jersey among them—into fiscal crises or force them to slash the help they give their lower-income citizens. Does anyone of right mind believe this will be good for our economy, let alone for social justice?

Ah, but these states are Democratic, so Republicans are happy to abuse their power to take a shot at their partisan opponents.

And isn't it funny, as former Federal Reserve Vice Chairman Alan Blinder pointed out in The Wall Street Journal, that so many of the provisions—keeping intact “egregious loopholes for real estate developers,” generously treating “pass-through“ income, killing the alternative minimum tax and being kind to heirs—just happen to be particularly good for a certain president of the United States who claimed he was fighting for the little guy and his family?

Between now and Election Day, 2018, not only Democrats but anyone who claims to believe in responsible and responsive government must hold up this scandalous abuse of power for all Americans to see. Republicans imposed an artificial deadline on their work and used craven, unconscionable and anti-democratic tactics solely to escape accountability. They did not want citizens to know how they were transferring piles of money to the wealthiest and the best-connected.

All senators who voted for this bill should be regularly reminded that they are now part of a government for the few imposed by the reckless.