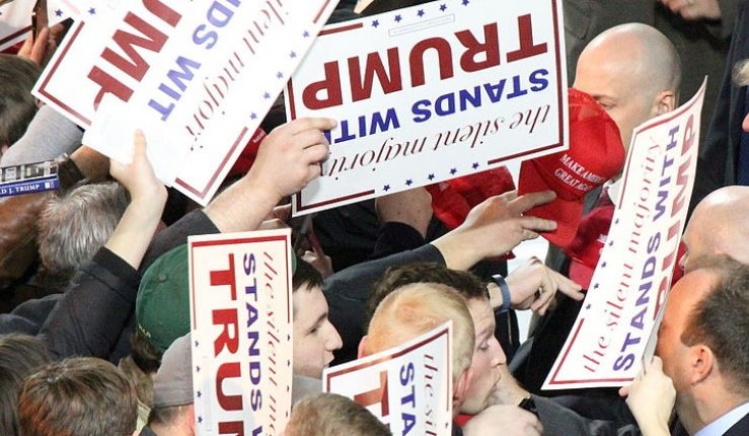 It is difficult to know what to make of Donald Trump’s bawdy political ascendency. What is certain is that the man who has promised to build a wall across the Mexico-U.S. border, deport 11 million undocumented immigrants, bar Muslims from entering the country, murder the families of terrorists, torture prisoners, muzzle journalists, and “go after” anyone who opposes him may be on the verge of becoming the presidential nominee of a major party. Victories for Trump in the Florida and Ohio winner-take-all primaries on March 15 will all but secure the prize for the unreality-TV star, a preening egomaniac who has inflated to cartoonish proportions the stereotype of the cynical, trash-talking New Yorker. If nothing else, New York deserves better.

Fearful of alienating voters drawn to Trump’s “straight talk” and his avowal to “blow up” Washington, rivals were once loath to criticize his ludicrous proposals and statements. Now they and other Republicans are calling him a “demagogue,” “con man,” “fraud,” “liar,” even “fascist.” These charges have not deterred his supporters among the rank and file, many of whom seem as delusional as Trump himself when it comes to how he might actually keep his campaign promises. Trump voters are sure that Washington politics is fixed. They are also convinced the Republican establishment has betrayed them. So far, the pleas of party standard-bearers such as Mitt Romney to abandon Trump before it is too late have mostly fallen on deaf ears. The more Trump is attacked, the more certain his followers are that he is a real threat to “politics as usual.” Panic has set in. Some Republican leaders fear the party is now destined to come apart. If Trump wins the nomination, significant numbers of traditional Republicans will sit out the election or vote Democratic. If Trump is somehow denied the nomination, his followers will spurn the party as well. Either way, the “rebellion” of the mostly white, working-class voters that Trump has so cynically appealed to is likely to end up destroying one of the nation’s great and enduring political institutions. If that should happen, Republicans will have no one but themselves to blame.

For many years Republican reformers such as David Frum, Ross Douthat, and Reihan Salam have been warning that the free-trade, low-tax, and anti-government orthodoxy of the Republican Party was doing nothing to alleviate the economic insecurities of working- and middle-class Americans. Many of those voters had been lured away from the Democrats by not-so-subtle racial politics, but also by the Republicans’ emphasis on cultural issues such as abortion, religious values, same-sex marriage, and political correctness. They have supported the GOP for decades only to see their wages stagnate, their benefits evaporate, or their jobs disappear altogether, while the cost of college rose out of reach for their children. When the Great Recession hit, and Washington bailed out the banks while doing little or nothing for the millions of Americans forced out of their homes, distrust of government became toxic. Exploiting those frustrations, Republicans have kowtowed to talk radio and Fox News, and embraced the atavistic demands of the Tea Party. Opposition to anything President Obama tried to accomplish became a litmus test. After forty years of proclaiming that government is the problem, the Republican unwillingness or inability to govern has become the much bigger problem.

Yes, the grievances of many Trump voters are legitimate, grievances that the Democratic Party does not have many answers to, either. That is no excuse, however, for the racist, xenophobic, authoritarian, and often just juvenile fashion in which Trump conducts himself. Nor is there any excuse for voters to willfully ignore the likely consequences should a man demonstrably unfit for the presidency win in November. Trump claims to be a master negotiator, a “genius” at the give-and-take that gets things done. But government is not business, and cannot be run like a business. The U.S. Constitution established three co-equal branches of government, and the current impasse between President Obama and Congress is a reminder that, if the legislative branch does not want to cooperate with the president, there is little he or she can do about it. Nor can a president negotiate with the Supreme Court. Trump is blithely ignorant, or contemptuous, of such realities.

The Republican establishment has failed to address in any serious way the real difficulties facing voters who are now flocking to Trump. As Trump’s heterodox positions regarding Wall Street, Social Security, and Medicare suggest, Americans who are struggling do not want smaller government; they want and need a government that works. And if that means higher taxes for the wealthy or putting a bloviating bully in charge, no matter how futile the result may be, that’s fine with them too. It is ironic, but perhaps only fair, that the political party famously dedicated to cutting government down to a size where it could be “drowned in a bathtub” is now gasping for breath itself.

Please email comments to [email protected]agazine.org and join the conversation on our Facebook page.