Happy sight lines when metaphorical journeys correspond with real ones! I suppose I started on the search for G. M. Hopkins in 1963. “Fresh fire-coal chestnut fall” was the phrase that started me off. My Jesuit teacher at the time asked us to write a close description of an active natural event , a personal “Pied Beauty.”  Suitably enough reflecting my temperament at the time, I wrote of the sparks that fly tangentially off a grinding wheel. What sort of ideas I was whetting then, of future and of career, had some cause, at once consequential but not determining – if only as hindsight salvages them – in Father Hopkins, S.J.

We travelled to Dublin for the first time two weeks ago, arriving so early in the morning that we had to wait, half-asleep, for breakfast. A full Irish day stretched before us. Aware that I had missed Keats’ grave in Rome on our only trip there, I made sure to ask the hotel clerk for directions, by public transport, to Glasnevin Cemetery, where a website called “Poets’ Graves” assured me that I would find Hopkins’. The bus connection was easy, the driver obliging, and he called out to us when to step down to the pavement and told us where to walk, an odd quarter mile, to find the cemetery entrance.

Glasnevin is a very large, walled burial place, and it has the tombs of many famous Irish dead. There is a modern Visitors Center, a testimony to the crowds who come to show respect to those who founded the nation, and convenient for those who seek their ancestors. I asked at the desk and was assured that “he is buried in the Jesuit plot.” That was a walk to the perimeter of the graveyard near a turn in the surrounding wall.

We wandered in a beautiful place, marked by a modern Round Tower, a center point from which yews, tall stone tomb stones, tree-lined alleys, tidy gardens, a memorial chapel - even a florist’s stall- spread out. The uneven ground where, as we were told by a groundsman, “all the orders were” tripped me up, and it defeated my expectations. Where were the Jesuits? We held onto iron railings, deciphered inscriptions, but saw no S.J. after any surname.

Misdirection sent us to the far end of the cemetery in what was a magical morning light: deep shadows and bright reflections from the dew lying on grave markers. The picturesque mixed with the macabre – steps leading down to crypts, spoiled flowers, chipped memorials, even a chain joined by two sculpted hands stretching over a wrought-iron rail that boxed off a couple’s plot.

No defunct Jesuits. We walked back to the Center, had the initial directions confirmed, and returned passing Parnell and the First World War memorial site, to find, in plain sight, the Jesuit Plot. Again, a wrought-iron rail surrounded it, meters square. Just then, another groundsman approached us and pointed to the large cross with a wide and storied pediment.  “He’s there,” he told us. “Or he is somewhere here. There are a lot of them.” And indeed he was and they were. His name Gerardus Hopkins lay inscribed among many others, as I am sure he would have wanted, safe with those with whom he had dedicated his life.

Hopkins’ last words, “I am so happy, I am so happy,” I tried to resay. I even had the odd notion of walking around the ground carefully so I at least might have physical contact, shoe sole to turf. Then the “terrible sonnets” replayed themselves, “Bitter would have me taste: my taste was me.” “Not live this tormented mind/With this tormented mind tormenting yet.” In the end his heart his heart did have pity on.

That was my Irish pilgrimage, fifty years to share silence with a man who made us look at “All things counter, original, spare, strange.”  No better a place for that than Glasnevin. Metaphorically, I couldn’t find him easily, a role model whom I didn’t understand, and scarcely do now. In reality, I wandered for half an hour until I ran my fingers on the groves of his name -a rough sort of contact,of whose tactile continuance I still feel the impress.

When I Was A Child 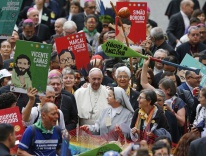