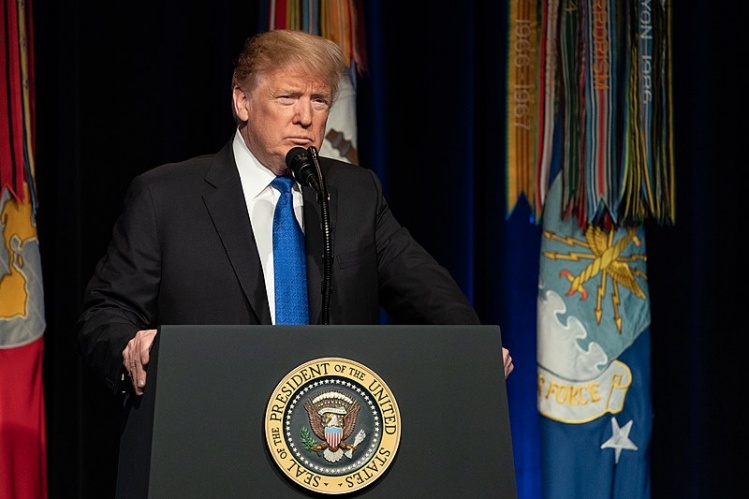 Trump’s decision to pull U.S. troops out of Syria has caused backlash among Republicans who otherwise turned a blind eye to his transgressions. (Wikimedia Commons/Tia Dufour)

This bold hypothesis was put forward in 2016 by Professor Donald Trump, who claimed that he could “stand in the middle of Fifth Avenue and shoot somebody” and not “lose any voters.”

His proposition is by no means implausible. He won his Electoral College majority despite his louche and obscene admissions to sexual assault in the “Access Hollywood” tape. He has survived revelations of hush-money payments to alleged paramours, and persuasive evidence that he obstructed justice in special counsel Robert Mueller’s Russia probe.

The vast majority of Republican politicians have stuck with Trump through one abuse of power after another, including the shocking mistreatment of migrant children, which the morally attentive Rep. Elijah Cummings—to his everlasting credit—continued calling to public attention up to his death.

Trump, of course, was no mere academic bystander as his theorem was put under heavy stress. He rallied his loyalists in primaries to purge Republicans who dared speak against him. Most in the GOP don’t want to suffer the fate of former South Carolina Rep. Mark Sanford, whose 2018 primary defeat was an object lesson to other would-be dissenters. Trump has always understood Voltaire’s sardonic observation that it’s wise to mete out severe punishment to those who fail you in order “to encourage the others.”

But those others—meaning members of the GOP who will be the arbiters of Trump’s fate in the coming weeks—are not feeling quite as encouraged in their loyalty to the president as they once were.

Members of the GOP who will be the arbiters of Trump’s fate in the coming weeks are not feeling quite as encouraged in their loyalty to the president as they once were.
sharetweet

No, Trump has not murdered anyone on Fifth Avenue yet. But many in his multiplying legion of critics believe Trump has blood on his hands because of his weak and reckless response to Turkish President Recep Tayyip Erdoğan. The result was Turkey’s assault on the United States’ Kurdish allies. For once, the president brought our deeply divided parties together. In the House, 129 Republicans joined every Democrat in condemning his fecklessness. Only 60 Republicans stuck with him.

Then came the admission from Mick Mulvaney, the acting White House chief of staff, that the White House withheld nearly $400 million in military aid from Ukraine to further Trump’s political objectives. Mulvaney tried to unscramble the unsavory omelet he had placed on Trump’s desk—as the Washington Post’s editorialists archly observed, it seemed to dawn on Mulvaney that “confession might not be the most astute defense strategy”—but his walk-back was entirely unconvincing.

And credit Trump, the researcher, with making the test of his loyalists as difficult as possible. As if his other breaches were not enough, the White House announced that the G-7 meeting of leading powers would be held at the ailing Trump National Doral resort near Miami. Realizing, for once, that he had gone too far, he backed off on Saturday.

So how can the Fifth Avenue theory survive? Trump has one reliable gambit, the stick-it-to-the-libs strategy. Everything Trump does—his performative racism, his attacks on “political correctness,” his claims to be shielding conservative Christians from liberal persecution, his standing up to the dark hordes at our borders—is designed to turn all criticisms of himself into a socialist-liberal-radical conspiracy against the good people who support him. As long as Trump is at the helm, they have nothing to fear.

It was convenient for Attorney General and chief Trump propagandist William Barr to issue a warning last week at the University of Notre Dame against “militant secularists” and “so-called progressives” for plotting the “organized destruction” of the role of religion in American public life.

“Secularists and their allies,” Barr thundered, “have marshaled all the forces of mass communication, popular culture, the entertainment industry and academia in an unremitting assault on religion and traditional values.”

Standing with Trump means standing against those (particularly in “mass communications” and “academia”) whose jobs happen to entail presenting facts to counter the fictions of the president and his guardians.

Oh yes, and for more conventional conservatives, there are those wonderful judges and Trump’s economic policies. Conservatives don’t want to give aid and comfort to the likes of Elizabeth Warren and Alexandria Ocasio-Cortez, do they?

“My enemies are your enemies” is standard stuff among beleaguered politicians. But it can be a dangerous doctrine for those being asked to pledge loyalty. Trump is telling conservatives to forget pretty much everything they claim to stand for in the interest of grinding their boots into liberal faces. It’s a lot to ask. But, hey, it’s worked so far.