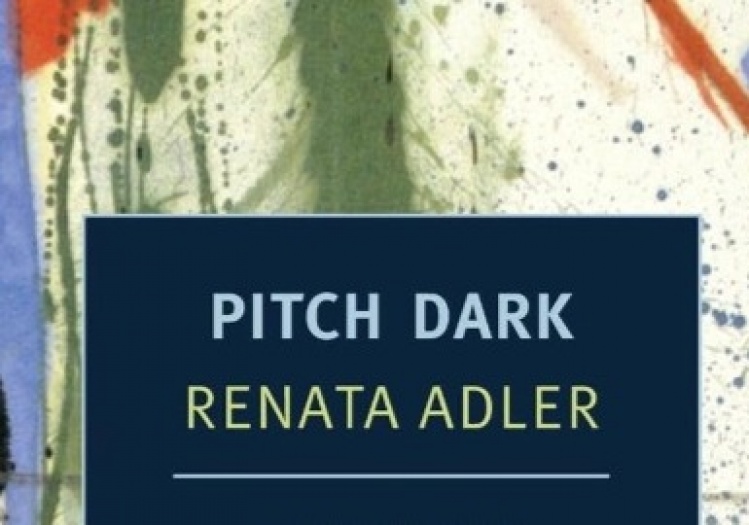 Henry Green, one of the most neglected great writers of the twentieth century, has been described as “a writer’s writer’s writer.” This designation points not just to the technical brilliance of Green’s prose but also to the small, cultish, and hyper-sophisticated nature of his readership. To say that you know and cherish Green’s Loving or Living or Doting is a sign that your taste is as exacting as your literary knowledge is vast.

Renata Adler is also a writer’s writer’s writer, an essayist and novelist whose exquisite style and sharp wit have led to passionate but never particularly widespread praise. Adler is probably best known for her 1980 essay “House Critic,” a piece in which she memorably described Pauline Kael’s New Yorker reviews as “jarringly, piece by piece, line by line, and without interruption, worthless.” But she’s most revered as the author of two slim, elliptical novels: Speedboat, published in 1976, and Pitch Dark, published in 1983.

The novels—experimental in form, restless in intelligence, and dark in humor—were rapturously received, but they quickly went out of print. For years, they were passed around like samizdat. Those in the know knew—David Foster Wallace included Speedboat in a course he taught at Pomona College—but most readers did not know and would in any case have had trouble finding a copy of either book. That is, until this year. In 2010, the National Book Critics Circle identified Speedboat as the book they’d most like to see back in print, and now New York Review Books has answered the call, re-issuing Speedboat and Pitch Dark in beautiful paperback form. For the first time in a long time, Adler’s fiction will get a chance to move beyond its small coterie of admirers.

Speedboat and Pitch Dark are almost impossible to describe in conventional novelistic terms. Yes, they both have a central protagonist/narrator: in Speedboat, it’s Jen Fain, a tabloid reporter and sometime college instructor; in Pitch Dark, it’s Kate Ennis, also a writer, slightly older and a lot sadder. And yes, they both have a clearly defined setting (upper-middle-class New York in the 1970s) and some semblance of a plot. In Speedboat, Jen drifts from romantic attachment to romantic attachment until, in the end, she gets pregnant (maybe). In Pitch Dark, Kate sees an affair end, drifts to an island off the coast of Washington and then to Ireland, gets caught up in several seemingly sinister plots, until, in the end, she gets back together with her lover (probably).

But none of these categories—character, plot, setting—does justice to what reading Adler’s novels actually feels like, precisely because Adler is uninterested in the traditional armature of the novel. At times, Speedboat and Pitch Dark read like diaries: Jen tells us about the horrors of a dinner party and then relates a conversation she overheard on the subway; Kate tells us about a nightmarish experience she had with Irish bureaucracy and then describes an awkward interaction she had with a neighbor. At other times, Adler breaks whatever narrative flow there is to offer the reader mini-essays on the nature of prayer or the American legal system (Adler has a JD from Yale Law School). Sometimes Adler will give us fully fleshed-out scenes, as when Jen remembers her days in college; sometimes she will cut a scene short, leaving us unsure of exactly what happened or what it all meant.

Adler, in short, wants to write a different kind of fiction, one that relies not on narrative arc but on fragmentation, not on the slow, patient enrichment of character and theme but on syncopation and associative leaps. Speedboat and Pitch Dark do what Virginia Woolf said modern fiction should do: “trace the pattern, however disconnected and incoherent in appearance, which each sight or incident scores upon the consciousness.”

To read Speedboat and Pitch Dark is to be confronted by a sense of groundlessness: Where am I, and who is speaking to me? Both novels use the technique of collage—they’re composed of short, elliptical paragraphs that often start off in one direction only to move in about seven new ones before arriving at a new place altogether. It’s often difficult to grasp how one sentence leads to the next; it’s even more difficult to keep track of how you got from one paragraph to the other. It’s a restless, jumpy style, never willing to settle into a single register, scene, or theme for too long.

Here’s one example, taken from Speedboat. Adler first presents an amusing conversation between two unknown, unnamed characters about a wife being chased by an elephant: “How extraordinary,” one of the characters proclaims; “Yes, it was too awful,” the other responds. Then, Adler jumps to the odd cast of characters Jen Fain regularly sees at the 42nd Street branch of the public library: “one who doodles the same bird endlessly on the back of a half of a single bank check, one who hums all the time, and one who keeps asking the other two to stop. A little pantomime concerto.” Then, there’s another reported conversation, this time between Jen and a girl who are sitting near each other on a puddle-jumper airplane. Finally, we get to a single-line paragraph, which reads, in its entirety, “Another weekend. Any dreams. P.O. Box 1492.”

The reader is put in a challenging position. Do I try and press the seemingly irrelevant detail into significance? (Is “P.O. Box 1492” an allusion to Christopher Columbus? Is the laconic conversation about elephants making fun of Hemingway?) Do I attempt to discover the unseen connections between individual vignettes? Or do I just accept that the gaps are themselves the point and enjoy each paragraph as its own, self-sufficient unit?

This may make it sound as if reading Adler were just an (exhausting) intellectual exercise, but that’s not really the case. Adler is a brilliant and enjoyable writer on a sentence-by-sentence, paragraph-by-paragraph level. She’s lucid, funny, and smart. Her prose is sometimes almost aphoristic: “There are times when every act, no matter how private or unconscious, becomes political.” “Deliberate, pointless boredom is a kind of menace, and a disturbing exercise of power.” (Adler knows that aphorism often gives only the appearance of truth. At one point, she describes the words of Oliver Wendell Holmes as “an instance of the hollow, perfectly specious aphorism.”)

It can be difficult to discern any organizing principle in the scraps of dialogue and suggestive anecdotes that Adler picks up and presents for our amusement. But there are two large-scale subjects that can serve as guiding threads to Speedboat and Pitch Dark.

The first is the strangeness of language as such. Both Jen Fain and Kate Ennis display great sensitivity to the ways in which language shapes—that is to say, both enriches and distorts—our experience of the world. In Speedboat, Jen ponders the existential abyss opened up by the term “self-addressed envelope”: “Such an envelope, immutably itself, is always precisely where it belongs.” A minor character in Speedboat, Joel Seidington, “thought when he knew what a thing was called, he had nailed it. Or, rather, a thing burned more brightly for a second when he held its name to it; then it was ash.” You emerge from both novels freshly attuned to just how weird everyday speech can be. Adler is wonderful on the insidiousness of clichés, particularly within the journalistic world:

Talent was blazing through the columns and onto the coffee tables. The physical-assault metaphor had taken over the reviews. “Guts,” never much of a word outside the hunting season, was a favorite in literary prose. People were said to have or to lack them, to perceive beauty and make moral distinctions in no other place…“Nerve-shattering,” “eye-popping,” “bone-crunching”—the responsive critic was a crushed, impaled, electrocuted man. “Searing” was lukewarm.

Adler’s second major theme is the strangeness of social existence. She possesses a Proustian ability to describe and skewer social conventions. Adler gives us a rich portrait of New York in the 1970s, the kinds of controversies that were continually discussed (Watergate, birth control, the IRA) and the various attitudes taken toward them (angry, bemused, ambivalent). We hear about the books an intellectual, liberal woman of the time would have been shaped by:

We may have read and reread, with curiosity, D. H. Lawrence. But if we were, in the end, as young adults and in sexual matters, anyone’s creatures, we were also, though we would never have mentioned it to one another, John O’Hara’s. Highly educated. Even original or finely tuned. But his creatures all the same.

The best passages combine Adler’s eye for social mores with her ear for linguistic absurdity:

For a while, I thought I had no real interests—no theater, concerts, museums, stamp collections. Only ambitions and ties to people, of a certain intensity. Different sorts of people. I was becoming a ward heeler of the emotional life. Now the ambitions have drifted after the interests. I have lost my sense of the whole. I wait for events to take a form. I remember somebody saying, “You’ve got to steep yourself in things.” So I steeped myself, in thrillers, commercials, news magazines. The same person used to write “tepid” and “arguable” all over the margins of what our obituary writers wrote. I now think “tepid” and “arguable” several times a day.

To write about Adler, you have to quote her regularly and at length. That’s a lesson that Adler’s novels themselves teach us: that quotation is itself an intellectual and stylistic exercise; that the pleasure of artful scavenging may be different from that of original thinking, but it’s a pleasure nonetheless.

Speedboat and Pitch Dark are strange works because the world they describe is strange. Like Emily Dickinson, Adler tells all the truth but tells it slant. That’s because, as Jen Fain puts it, “the reality I inhabit is already slant.”