‘The Most Famous Writer Who Ever Lived’
By Robert K. Landers
Books 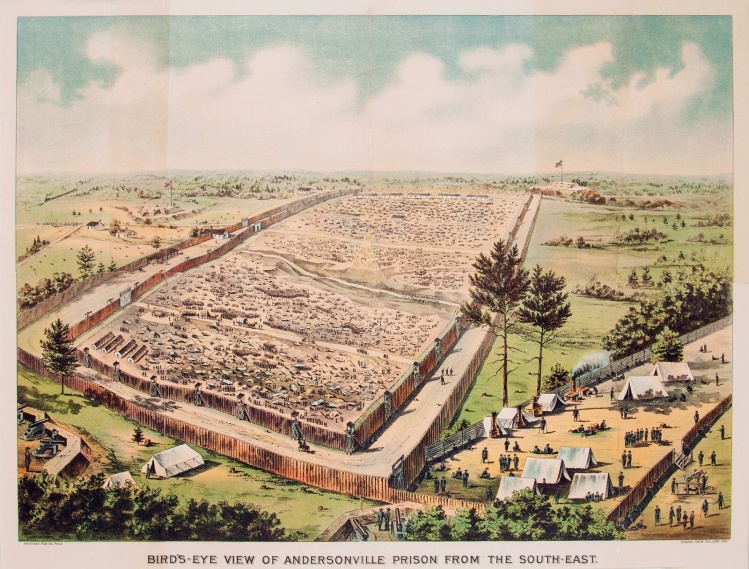 As novelist MacKinlay Kantor neared the end of his labors on Andersonville (1955), his magnum opus about the notorious Confederate prison in which thirteen thousand (out of forty-five thousand) Union captives died, he pronounced his book very good indeed: “There hasn’t been anything remotely resembling it in the annals of American historical fiction. Everyone has to go back to War and Peace for comparison.”

Reviewers did not go back so far as that. But historian Henry Steele Commager, in a front page verdict in the New York Times Book Review, declared that Andersonville was “the greatest of our Civil War novels.” Civil War historian Bruce Catton, writing in the Chicago Tribune’s Magazine of Books, called it unquestionably “the best Civil War novel I have ever read.” And the next year, Andersonville was awarded a Pulitzer Prize.

Nor was Andersonville merely a succès d’éstime: In January 1956, it began a long reign at the top of the Times bestseller list. By that November, Kantor had earned $150,000—the equivalent of $1.3 million today. Andersonville made him not only wealthy but a celebrity, featured, for instance, in a full-page Lord Calvert whiskey ad that appeared that year in Life, the New Yorker, and elsewhere.

Today, though, like such other once-celebrated novelists as James Gould Cozzens (whose Guard of Honor won a Pulitzer in 1949) and John P. Marquand (whose The Late George Apley won a Pulitzer in 1938), MacKinlay Kantor (1904–77) and his magnum opus are largely forgotten. But not by his grandson Tom Shroder, the author of several books and a former editor of the Washington Post Magazine. Born the year before Andersonville was published, Shroder looks back at Kantor in a biographical memoir, The Most Famous Writer Who Ever Lived—which is what Shroder’s mother once told him her father had led her and her brother to believe he was when they were growing up. (Kantor had had his first national bestseller in 1934 with a novel about the battle of Gettysburg, and a 1945 novel about American veterans returning from World War II became the basis for the Oscars-winning 1947 film The Best Years of Our Lives.)

Before Shroder embarked on his memoir in 2014, he had paid scant attention to his grandfather’s forty-some books, including thirty-one novels. “Though his many books lined a shelf in my bookcase, I never so much as cracked open a cover, save for Andersonville” (which, in the most recent paperback edition, has 754 pages). When younger, he’d made two or three stabs at reading it, but—despite his fascination “since childhood” with the Civil War—he failed to get beyond the first thirty-five pages. With the arrogance of youth, he had considered the writing “old-fashioned.... I simply didn’t have the patience or the interest to give it much of a chance.”

Nor had he given his grandfather much of a chance on one of his last encounters with him. Six months before the novelist died—his reputation having steeply declined, as, due to his spendthrift ways, had his fortune—Kantor had told a long and unfunny story at a wedding reception for Shroder’s first marriage. A friend of Shroder’s made a deflating wisecrack about Kantor’s interminable tale, and along with everyone else, Shroder laughed. (“What would I give to take that back?” he writes. “Name a price, please.”) Humiliated, Kantor stormed out of the party.

At Shroder’s final encounter with his grandfather on the latter’s deathbed, he heard Kantor’s last words: “Horrible! Horrible!”—which were very like Kurtz’s last words (“The horror! The horror!”) in Joseph Conrad’s Heart of Darkness. Kantor’s had Shroder pondering them “a thousand times, ten thousand times, in the four decades since,” but he ends by thinking that, perhaps, “last words are less important than all the words that came before.”

Does Andersonville, on its merits and despite its impediments, deserve to be “part of the conversation today”?
sharetweet

It was not to rescue Andersonville or its author from oblivion that Shroder decided to explore Kantor’s life. Rather, having been encouraged by the Post in 2009 to take a buyout and leave its employ (despite his having conceived and edited two feature stories that each would win a Pulitzer for a Post writer), he found himself, in some of the ensuing years, filing tax returns “with disturbingly slender bottom lines.” As his 2014 book, Acid Test, about the medical use of psychedelic drugs, neared publication, he came to see his familial connection and the cache of Kantor’s documents, 158 boxes with 50,000 items, at the nearby Library of Congress as a biographical memoir waiting next to be written.

In The Most Famous Writer Who Ever Lived, Shroder has taken a clear-eyed look at his grandfather: “the brilliant, selfish, loving, complicated, damaged, unforgettable person that he was.” Indeed, he does this with a detachment that, while not devoid of sympathy, and a gift to readers who want to see Kantor as he was, initially struck me as a rather coldblooded way to treat his mother’s father and the man apparently responsible for the red and white Schwinn bike that so delighted the five-year-old Shroder on Christmas Day 1959. (As Shroder much later learned, Kantor himself as a boy had been promised a bike by his absent father—who was an inveterate con man—but never got it.)

Shroder’s detachment about his grandfather finally was redeemed for this reader by Shroder’s honesty in turning it on himself. “I have often wondered,” he writes at one point, “if I tended toward [a lack of empathy] a little more than most.... Could the tendency I’ve noticed in myself be some thankfully watered-down [genetic] inheritance from John [Kantor, his con-man great-grandfather]?”

Though Shroder knew that Andersonville had been favorably received, he had approached his project with such meager regard for his grandfather’s works that he was surprised on reading Commager’s 1955 review to learn just how much of “a big deal” Kantor had been. The realization prompted the writer to reflect: “If he was ultimately insignificant, what was I?”

Shroder comes to find “something close to genius” in Andersonville and its “obsessive attempt to paint” a grim moment in America’s past “in a gigantic, inclusive mural, a Sistine Chapel version of the historical novel bristling with intimate knowledge of everything from how people talked to how they smelled.” Somehow, though—and it’s why, in his view, the novel “did not retain its prominence into another century”—“the authenticity of detail serves to make these characters from the past seem alien. They not only look different but think different and feel different.” Whereas, in War and Peace, the early-nineteenth-century countesses and generals seem to readers today “eerily the same” as they themselves.

Though Kantor lacked “Tolstoy’s immortal alchemy,” Shroder suggests, he would have helped his readers “if instead of dozens of characters equally weighted, there were one or a few in whom we could become supremely invested, and whose path through the novel, from beginning to end, kept us turning pages, desperate to know how it all turns out.” That, he adds, was the strategy Ernest Hemingway and Scott Fitzgerald used “to keep ’em reading,” and those novelists, unlike Kantor, “are still part of the conversation today.”

Does Andersonville, on its merits and despite its impediments, deserve to be “part of the conversation today”? That is a question that Shroder, apparently viewing significance as simply a market phenomenon, does not attempt to answer. But a paperback “60th Anniversary Edition” of Andersonville was published in 2016, so prospective readers who are curious can readily judge for themselves.

The Most Famous Writer Who Ever Lived
A True Story of My Family
Tom Shroder
Blue Rider Press, $28, 416 pp.