The Faith of Amy Coney Barrett

Her record, not religion, tells us all we need to know.
By Matthew Sitman
Domestic Affairs
Donald Trump
Supreme Court 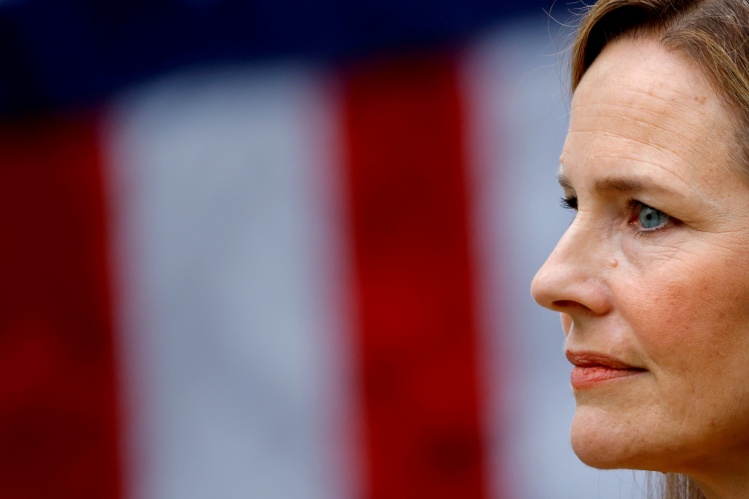 President Donald Trump’s nomination of Amy Coney Barrett to the Supreme Court, like much else that’s happened during his time in office, seems to be simultaneously taking place in two different worlds. In the right-wing alternative reality—the same one in which COVID-19 is less dangerous than the flu, U.S. cities are burned-over wastelands controlled by antifa, and Democratic presidential candidate Joe Biden is a raving socialist—Barrett is facing waves of bigoted attacks because of her faith. For inhabitants of this alternative reality, a handful of regrettable articles about the charismatic lay movement she reportedly belongs to, the People of Praise, the inevitable awfulness of social media, and a cheap comment from Dianne Feinstein in 2017 prove that anti-Catholicism remains a pervasive, outsized influence in our society. They see a Supreme Court with five sitting Catholic justices—Barrett would be the sixth—as an institution being jealously guarded by prejudiced, secular elites from the contaminating influence of religious faith.

This right-wing alternative reality is a world that begins anew every morning. Past positions are no guide to the present, and the only firm principle is the pursuit of power. The same conservative Christians who for decades lamented the rise of a “naked public square” and insisted that believers should not have to check their faith when entering political life now find unseemly, or worse, the possibility of asking Barrett questions about the way her religious commitments relate to her jurisprudence. The fact that her own published work raises such issues—she has suggested Catholic judges might have to recuse themselves from certain cases involving the death penalty, for example—is waved away, while any mention of her speeches to the Blackstone Legal Fellowship, founded to help students understand “how God can use them as judges, law professors and practicing attorneys to help keep the door open for the spread of the Gospel in America,” is denounced as a low blow. Nor do those embracing this alternative reality seem capable of grasping that their own support for Barrett often includes praise for the parts of her life they otherwise deem off-limits. In one testimonial, a former student of Barrett’s put it this way: “The ease with which she donates her time and energy to serving others comes from years of loving the Lord with her entire heart, mind, and strength, and loving her neighbor as herself.” It turns out Barrett’s faith is a pertinent consideration, even a qualification—if her supporters consider the optics helpful to her nomination. Pro-life activists are permitted to coo over a Catholic mother of seven, clearly one of their own, but any suggestion that her background might fortify an inclination to roll back Roe v. Wade is decried as ugly conspiracy mongering.

None of this matters to those living in the right-wing alternative reality, of course. So what if most reporting on Barrett has been responsible, and that countless commentators have insisted on the distinction between legitimate questions about Barrett’s faith and unfair sensationalism? Those are irrelevant details to people who understand themselves to be viciously persecuted even as they control much of the federal government and are set to dominate the Supreme Court for a generation. They thrive on grievance and seek to turn all political fights into culture-war theatrics—anything to steer attention away from their policies that harm the sick, the stranger, and the struggling. In the case of Barrett’s nomination, that means her Republican supporters are desperately trying to turn arguments about her disturbing judicial record into a controversy over her religious beliefs. Missouri Sen. Josh Hawley already has written a stern letter to Democratic Minority Leader Chuck Schumer warning him not to permit any “anti-Catholic, anti-Christian, anti-faith vitriol in the hearings to come.”

Barrett’s nomination did provoke dire concern—but it had nothing to do with her religion.
sharetweet

Hawley’s bluster is a typically pathetic attempt at obfuscation. In the reality that exists outside the pages of National Review and the story lines of the Fox News Cinematic Universe, Barrett’s nomination did provoke dire concern—but it had nothing to do with her religion. Since Trump announced his decision, Democrats have doggedly focused on the threat Barrett poses to the Affordable Care Act—especially since the Supreme Court is set to hear a challenge to the law just a week after the election in November. The Biden campaign quickly released a statement taking aim at her “written track record of disagreeing with the U.S. Supreme Court’s decision upholding the Affordable Care Act.” In a speech the following day, he doubled down on that line of attack: “This is about your healthcare. This is about whether or not the ACA will exist. This is about whether or not preexisting conditions will be continued to be covered.” Many Democrats worried that Barrett could imperil abortion rights, but they underscored again and again the likelihood of her overturning or gutting the Affordable Care Act. Sen. Bernie Sanders expressed outrage that after failing so spectacularly at handling the pandemic, Trump and the Republicans “are willing to ram through a Supreme Court nominee—within days—who will vote to destroy the Affordable Care Act, kick millions of Americans off their health care, and eliminate protections for millions more who have preexisting conditions.” House Speaker Nancy Pelosi criticized Barrett’s nomination in similar terms: “For four years, President Trump has tried to crush the Affordable Care Act in the Congress and the Courts. This nomination threatens the destruction of life-saving protections for 135 million Americans with pre-existing conditions.” Schumer, Elizabeth Warren, and Biden’s running mate, Kamala Harris, all repeated the message.

It’s unlikely that Senate Democrats can stop Barrett from being confirmed, though there are reports of a memo circulating on Capitol Hill that details the extraordinary measures at their disposal. That they are being considered at all is a reminder that Barrett’s acceptance of the nomination under these circumstances is itself evidence that she’s unfit for a position of such vast responsibility. A more conscientious candidate would refuse to be installed on the Supreme Court through a farcical, truncated process just weeks before an election—an election the president who nominated her is openly proclaiming his intention to abscond with, in part, through litigation that she could be called on to resolve. That Barrett hasn’t done this is further confirmation of her partisan loyalties that at least stretch back to the work she did for the Republican legal team in Bush v. Gore. She seems to be a willing participant in the GOP’s strategy of minority rule.

But should the Senate move quickly on her nomination, the hearings that follow can still be used to dramatize the possibility that Barrett—and Trump—will strip millions of people of affordable healthcare during a pandemic. And not just that. Barrett has taken many unsettling positions that deserve attention. It turns out that there’s no need to investigate the inner workings of the People of Praise to discover what she really believes. Contrary to the impression many have of Barrett, what is most striking about her record is not the looming specter of theocracy, but her enduring opposition to what many Christians believe justice and mercy demand, presented under the aspect of originalism—an ersatz catechism, written in the pages of her judicial opinions, that fuses the political aims of the religious right with the constitutional theories of the late Antonin Scalia.

What is most striking about Barrett’s record is not the looming specter of theocracy, but her enduring opposition to what many Christians believe justice and mercy demand.
sharetweet

In addition to her skepticism of the Affordable Care Act, Barrett has been rightly characterized as having a “years’ long record of ruling against immigrants.” In a forty-page dissent from the Seventh Circuit’s ruling in Cook County v. Wolf, she backed the Trump administration’s policy of imposing what Vox’s Nicole Narea calls a strict “wealth test” on immigrants applying to enter or stay in the United States. The draconian rules were designed to let officials block even applicants who had never received public assistance before—leaving Barrett to defend the use of the “public charge” rule to exclude immigrants who were not a public charge. In another case, she refused to review a Salvadoran man’s petition for humanitarian protection in the United States. The man claimed that he would be murdered by gangs if he returned home, but immigration judges did not find credible his account of being attacked twice by gang members there. He pleaded that the discrepancies they identified in his story were due to his poor command of English. Rather than admit that possibility, Barrett curtly stated that “he could not keep the facts straight” and left him to an uncertain fate.

This tendency to discipline the vulnerable is the flip side of Barrett’s leniency, even generosity, toward the powerful. She might not give the benefit of the doubt to a poor Salvadoran man, but she’s displayed startling credulity toward those who run our prisons. Her dissent in McCottrell v. White supported a lower court’s grant of summary judgment that sided with prison guards who fired their weapons from the tower above a prison cafeteria after a fight broke out, injuring two inmates with buckshot. The inmates claim that the “scuffle” was already under control when the guards shot at them, and that the guards violated the Eighth Amendment by using excessive force. While her Seventh Circuit colleagues held that the prisoners should have the chance to prove their case at a trial, Barrett, as one report puts it, simply took the guards’ word for it and “relied heavily on an internal prison report to conclude that the guards fired their shots at the ceiling rather than at those who were in the dining hall.”

This favoritism toward prison guards is not Barrett’s only peculiar priority. She insists that those who’ve been convicted of nonviolent felonies have the right to own firearms, but her views on the right of those same people to vote are less sympathetic. She is reliably hostile to the labor movement and the rights of workers. Her understanding of stare decisis could mean that she leads the charge to set back LGBTQ rights for decades.

No one should object to Barrett joining the Supreme Court because she is a conservative Catholic, or because she might belong to the People of Praise. Her nomination deserves to be rejected because of her appalling record—a record that shows her to be a ready ally of the reactionary forces arrayed against what remains of American democracy. Barrett’s supporters will try to portray her as a victim; Democrats shouldn’t give them any excuses to do so. Let her persecution belong only to the wild imaginings of conservatives in that alternative reality where they, rather than the least among us, are about to be attacked.