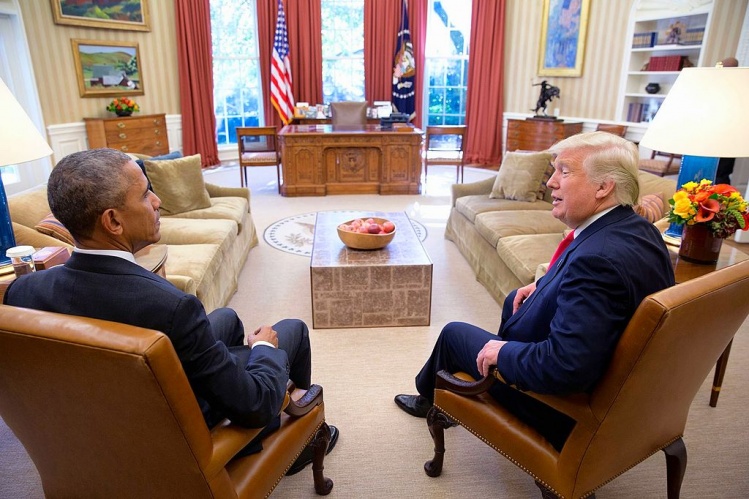 Barack Obama and Donald Trump, shortly after the 2016 election / Wikimedia

Knowledgeable pundits such as New York magazine’s Jonathan Chait and the Atlantic’s David Frum predicted that President Donald Trump and the Republicans would fail in their effort to repeal and replace the Affordable Care Act, or Obamacare. It is not just that the issue of health care and health insurance is “complicated” (who knew?). More damaging is the Republican Party’s philosophical objection to the idea that medical care for all might be something the federal government should protect and promote. Genuinely universal access to health care might even promote conservative values such as family stability and entrepreneurial risk taking. But that possibility is anathema to true believers on the right. The ideological aversion to government made it impossible for Republicans to write a bill that could deliver on their promises of better and less costly health care. The result, the American Health Care Act, would have given a significant tax cut to the wealthy while raising premiums and deductibles for older Americans and depriving 24 million of health insurance. Yet even that, it appears, was rejected as “Obamacare Lite” by the obstructionist members of the so-called Freedom Caucus. Trump and House Speaker Paul Ryan have met the enemy, and it is not the president’s predecessor, the media, or “liberal elites,” but the congressional Republican Party itself. “We are going to be living with Obamacare for the foreseeable future,” Ryan lamented in announcing the failure of his party, which controls both houses of Congress and the presidency, to pass the new administration’s most important policy goal. Seven years of the GOP’s demagogic attacks and disingenuous promises have ended in ruin.

Donald Trump and Paul Ryan have met the enemy: the GOP itself
sharetweet

It can’t be repeated often enough that the United States spends vastly more on health care (which now accounts for nearly one-fifth of the economy) than any other industrialized nation, yet gets medical outcomes that are much worse. The system is profoundly dysfunctional. A significant portion of the high cost of medical care and insurance for those who can afford it pays for the treatment of the uninsured in hospital emergency rooms across the country. Extending coverage to the uninsured, which Obamacare has done for more than 20 million Americans, is the first step toward rationalizing the system, controlling costs, and improving health outcomes. That is something government should and can do, and as the practice of other Western nations suggests, it is something that only government can do.

What happens next with Trump’s agenda is unclear. He claims to want to move on immediately to tax cuts for the rich and corporations. The failure to repeal the tax hikes that pay for Obamacare’s insurance subsidies and Medicaid expansion will make that more difficult. How Trump and Tom Price, head of the Department of Health and Human Services, administer the program will be crucial to its continued success. Unfortunately, the new administration appears tempted to sabotage the whole system. Obamacare “is exploding right now,” Trump said in his brief news conference after the defeat of the AHCA. That is not true, but it could become true if the administration fails to support the law’s initiatives. In 2014, House Republicans sued to block subsidies for low-income insurance buyers. Obama contested the suit in court. Will Trump? There is also a good deal of administrative flexibility in how the law is implemented. Price, a fierce opponent of Obamacare, is now in charge of its operation. Obamacare’s viability depends on getting as many healthy people as possible to buy insurance, so the public will need to keep a careful eye on how HHS does its job, and whether the administration encourages and supports insurance companies to enter underserved markets. Trump claimed that Democrats will now be held accountable if Obamacare collapses, but historically voters have held the man sitting in the White House responsible for the government’s failures. Trump should think twice, if that’s possible, before passing off blame or behaving rashly.

The public’s role in helping to defeat the repeal effort cannot be underestimated. As the media highlighted the damage repeal would inflict on individuals, millions of Democrats and others raised their voices in defiance in town-hall meetings, rallies, petition drives, and phone calls to their congressional representatives. In a remarkable turn of events, Obamacare’s popularity has soared. A recent Pew poll gave the program a 60 percent favorability rating, the kind of popular support that has been lacking for most of the decade since Obamacare became law. No one thinks the Affordable Care Act is perfect, but those who claim it is failing are lying. Now that Obamacare is here for the foreseeable future, it is time for the White House and those in both parties to fix what’s wrong with the law while extending coverage to the 9 percent of Americans still without insurance.