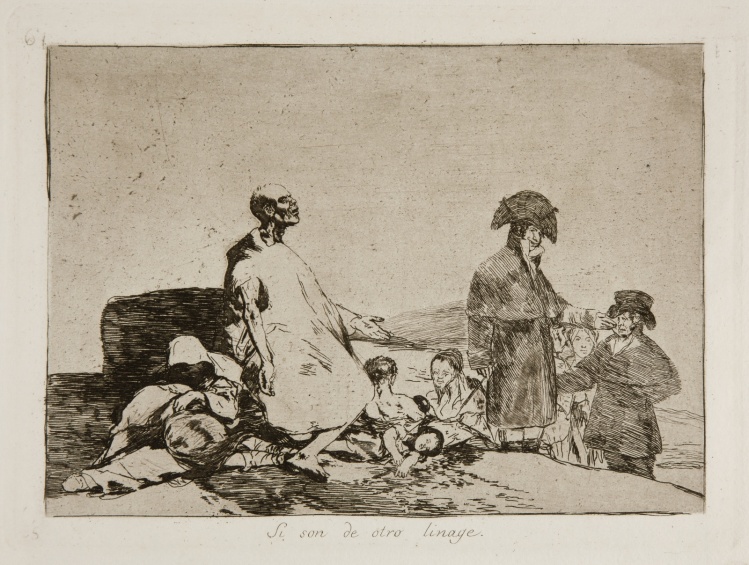 The middle third of Francisco de Goya’s Los desastres de la guerra, separating the endless graphic dismemberments, the bodies tied to posts, and the final, hallucinatory satires of church and monarchy, is a section devoted to the blameless, faceless victims of famine. Hooded figures, bodies wrapped in shrouds, a single man standing with his face in his hands surrounded by corpses, all drift about on blank city streets or wander through wastes without end. Goya renders them with characteristic harshness, chiseled grays serving as backdrops for the figures that seem to melt out of, or back into, shadows. Compared with the surrounding prints, the middle section feels languorous, vague. One never gets the sense that any of these figures were someone, or that anyone would have noticed their deaths. They seem to fade almost to nothing as we watch.

Last spring I was wandering through the Ulster Museum in Belfast when I came upon an exhibition of the Desastres taking up two rooms on the third floor. One in particular, number 61, (at right) has remained in my mind ever since. Atop a small hill, a family wastes away in a pile. Several children lie there dead; a hooded woman sinks into shadow. At the center of the etching a skeletal figure, blank-eyed, clad in a rough tunic, holds out his hand toward a gathering crowd. Between them stand two Napoleonic officials, one waving off the onlookers, while the other glances sideways and smirks. It is titled Si son de otro linage—“Perhaps they are of another breed.”

In 2017 more than three thousand people died crossing the Mediterranean from North Africa and Turkey to Europe. By our own frightening metric, this is something of an improvement: according to the UNHCR, more than five thousand people drowned, died of thirst, or were shot by soldiers in 2016. Of the more than 171,000 people who survived the passage in 2017, the vast majority came from Sub-Saharan and West Africa, countries like Nigeria, Guinea, and Mali, while a sizable chunk, over 15 percent, were fleeing civil war in Syria and Iraq. We might expect these; their suffering, however unimaginable, might at least seem placeable to us. But what to make of the more than nine thousand migrants from Bangladesh? Try to imagine their journey; I bet you can’t. I have a hard time even trying.

Try to think of the 3,771 refugees who died along the way, many of them now at the bottom of the Mediterranean. I try, and I find it impossible, unbearable
sharetweet

Other human beings can be incomprehensible to us even in the most intimate of circumstances. Every one of us contains a cosmos, an unfathomable combination of opinions, beliefs, hopes, worries, ideas, childhood memories, shames, fantasies, as well as an infinity of peculiarities that we alone house. Who can hope to cup all of those things while gazing into a face? How about when that face is seen only in a photograph, a pair of eyes peering out of the hold of a boat? What about when not even a photograph is available—when the face must be imagined?

It is safer, then, to abstract, to think of a refugee only in terms of needs, of beliefs, of the sorts of things that allow us to sort a person into a neat category. In 2015 more than a million people crossed the water to Europe. Try for a moment to conceive of every person with the inherent dignity with which they are born, as a just-so human being, with a past and a future. Now try to think of the 3,771 refugees who died along the way, many of them now at the bottom of the Mediterranean. Imagine their ordeal, if you can. I try, and I find it impossible, unbearable.

And yet, what other choice do we have? As Christians, we are commanded to see these desperate refugees as we would want to be seen—and, when they arrive on our own shores, to treat them as we would want to be treated. To love the other as one loves oneself is to pass beyond all the common barriers of language, race, and culture. Seeing refugees only as a threat to the comfort and security of the West is not an option for anyone who professes to follow Christ. We are all of the same breed, all children of God, all vulnerable to misfortune. There is no escaping this.