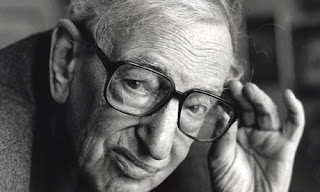 In one of those coincidences that heighten—or at least change—one's experience of a book, I had just started reading Eric Hobsbawm'sHow To Change the World: Reflections on Marx and Marxism, when I learned that he died earlier today at the age of ninety-five.

Hobsbawm kept working right up until the end of his life: How To Change the World appeared last year; next spring his British publisher will release a new collection of his essays on culture and politics. Hobsbawm's reputation as a historian was so great that it could coexist securely, if not always happily, with his reputation as an unrepentant Communist. He was a historian's historian. Conservatives like Niall Ferguson and anti-Communist liberals like Tony Judt revered his three-volume survey of "the long nineteenth century":The Age of Revolution: 1789-1848, The Age of Capital: 1848-1875, and The Age of Empire: 1874-1914.

Hobsbawm described himself as a "Tory communist," a term that always would have been paradoxical but is now almost unintelligible. In the second half of the twentieth century, as the cultural Marxism of the Frankfurt School became more important in American universities than Marx's political philosophy, it came to be assumed, not unreasonably, that any self-described Marxist would be as interested in the politics of personal liberation as in socialism. Hobsbawm, who was born in Alexandria, Egypt, and grew up in Vienna and Berlin before being shipped off to live in England just after Hitler became chancellor, was a different kind of leftist—the kind who found much of the Sixties counterculture decadent and, at best, counterproductive. He was, in the end, a kind of traditionalist. Like many other Communists of his generation, he was committed to pragmatic self-sacrifice, not utopian self-indulgence.

Despite his lucidity and widely attested personal decency, Hobsbawm also became an object lesson in the dangers of ideological devotion. His passion for justice drew him into a cause that would require him to excuse the many injustices that took place in the Soviet Union under Stalin. A lot of Western Communists abandoned ship after the Soviet crackdown on Hungary in 1956. Not Hobsbawm. Nor did he quit after the tanks rolled into Prague twelve years later. In a 1994 interview with Michael Ignatieff he famously claimed that if the Soviet Union had succeeded in creating a true communist society, it would have been worth the deaths of the twenty million people who perished under Stalin. Didn't Marx himself say that "no great movement has been born without the shedding of blood"? So self-sacrifice wasn't the only kind of sacrifice that socialism might require.

Too much can be made of Hobsbawm's unwillingness to offer the standard mea culpas. He did not deny that Stalin's atrocities really happened, or that they were indeed atrocities. He was not a revisionist, and he was not a monster. He was, rather, a man who had subordinated everything to a single hope. He would admit that this hope had been disappointed, but he would not renounce it. To do so would have been to renounce himself, since he believed it was this hope that had given his life its purpose and meaning. His willingness to accept the death of millions if it led to the world he thought socialism could deliver reminds me of Cardinal Newman's often quoted statement (at least as outrageous to any liberal secularist as Hobsbawm's theoretical bargain):

The Catholic Church holds it better for the Sun and Moon to drop from Heaven, for the earth to fail, and for all the many millions on it to die from starvation in extremest agony than that one soul, I will not say, should be lost, but should commit one single venial sin, should tell one wilful untruth, or should steal one poor farthing without excuse.

Some have argued that, despite its scientific pretensions, Marxism is essentially a misbegotten form of religion. Whether or not that is true, it is certainly the case that the Communist Party inspired, and indeed demanded, a kind of religious fidelity in its members. In a 2009 article in the Guardian, Hobsbawm offered a level-headed assessment of the economic and political challenges we now face after the death of Soviet Communism and the latest crisis in capitalism.

Impotence therefore faces both those who believe in what amounts to a pure, stateless, market capitalism, a sort of international bourgeois anarchism, and those who believe in a planned socialism uncontaminated by private profit-seeking. Both are bankrupt. The future, like the present and the past, belongs to mixed economies in which public and private are braided together in one way or another. But how? That is the problem for everybody today, but especially for people on the left.

Why "especially for people on the left"? Perhaps because people on the right, along with fellow-traveling neoliberals, still have or think they have a set of safe coordinates. (The reputations of Adam Smith and David Ricardo have not been tarnished—nor the interpretation of their work much affected—by what happened on Wall Street four years ago.) The left is still figuring out how to make use of Marx's important insights without going in for the whole package of discredited predictions and false promises. We should now be able to see what most people in Hobsbawm's generation, whether they were Communists or anti-Communists, could not see: that it's possible to learn from Marx without becoming a Marxist, much less a Communist. Certainly it's difficult to imagine, even now, how one could effectively oppose "international bourgeois anarchism" without first learning something about the logic of capitalism from Marx.

The Onion on Wal-Mart