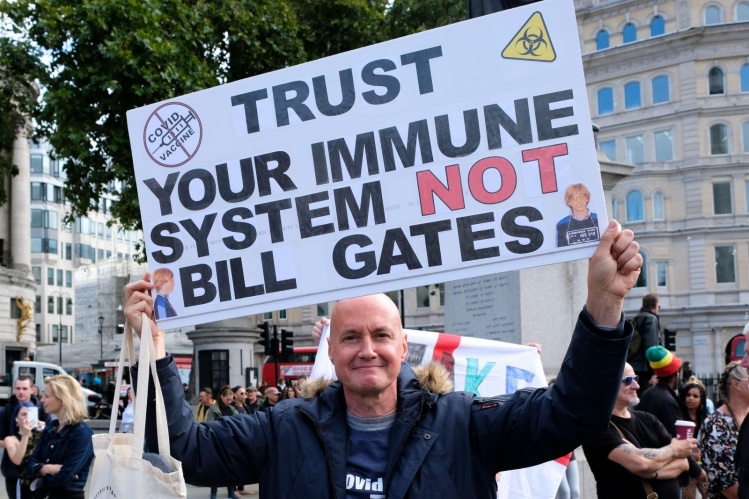 “Something is seriously wrong. An alarming number of citizens, in America and around the world, are embracing crazy, even dangerous ideas.” So claim Steven Nadler and Lawrence Shapiro in their recent book, When Bad Thinking Happens to Good People, a work that seeks to diagnose our contemporary “epistemological crisis” and to offer some tools with which we can combat the scientifically unfounded and conspiratorial thinking that is on the rise, especially in the United States. Formerly fringe movements, such as the anti-vax movement and QAnon, are increasingly prominent in American public discourse. Such movements have been the basis of political campaigns and have inspired a swath of protest movements across the country. As a recent PRRI poll has shown, a “nontrivial 15 percent of Americans agree with the sweeping QAnon allegation that ‘the government, media, and financial worlds in the U.S. are controlled by a group of Satan-worshipping pedophiles who run a global child sex trafficking operation.’” These and similar beliefs are certainly not morally innocent: anti-vax misinformation has led to unnecessary suffering and death, and the climate-change denial endorsed by some of our most prominent politicians has left the United States remarkably unprepared for a crisis that is already upon us.

Nadler and Shapiro argue that the kind of “bad thinking” we see on display in climate-change denial and QAnon fanaticism is a special kind of intellectual failing, distinct from ignorance, miseducation, and stupidity. This kind of bad thinking is instead a kind of “epistemic stubbornness,” a refusal to give up one’s beliefs in the face of countervailing evidence. The epistemically stubborn are guilty of confirmation bias: they ignore any evidence that doesn’t help their case and glom on to any information that does—or seems to. Epistemically stubborn people may be intellectually gifted. They may understand the “canons of good reason” but refuse to abide by them (one of the authors’ examples: a professional philosopher who promoted the conspiracy theory that the Sandy Hook massacre was a false-flag operation). The key words in this analysis are “stubborn,” “ignore,” and “refuse.” While epistemically stubborn people are making intellectual mistakes when they uphold beliefs contrary to readily accessible evidence—beliefs that are often based on nothing more than hearsay and that conflict with other truths the stubborn thinker holds—they are also making moral mistakes. And not only because epistemic stubbornness can lead to morally bankrupt action (as when a parent refuses to vaccinate a child out of the baseless fear that vaccines cause autism). According to Nadler and Shapiro, epistemic stubbornness is morally fraught even when it doesn’t produce harmful consequences. Whatever its practical effect, it is a “character flaw deserving of blame.” Luckily, they tell us, “bad thinking is always avoidable.”

Epistemic stubbornness is morally fraught even when it doesn’t produce harmful consequences.
sharetweet

The cure for the “virus” of bad thinking lies in a humanistic education, especially one that teaches us the “canons of good reasoning” as made available through philosophy. More broadly, the “antidote” is the examination of life promoted by Socrates, which seeks to cultivate a deep intellectual humility: I must come to recognize what I do and do not know, and I must never act as if I know when I do not know. If the conspiratorial, epistemically stubborn person can come to recognize what counts as good reasoning (valid deduction, statistically sound induction) and then begin asking herself, “Why do I believe this? Do I really have good and compelling evidence to support this claim?” then she can set forth on the road to recovery. When she learns to approach each of her beliefs with the same humility and demand for sound reasoning and evidence, then she will become wise.

There is much to commend in Nadler and Shapiro’s account. It is a remarkably clear and accessible introduction to critical thinking, some of the basic tools of logic, and contemporary epistemology (especially as practiced in the Anglo-American “analytic” tradition). Anyone who needs an introduction to or refresher on these topics would be well served. Likewise, the careful clarification of “epistemic stubbornness” as both an intellectual and moral failing—as distinguished from non-moral intellectual failings and non-intellectual moral failings—is helpful for thinking about contemporary forms of bad thinking. Moreover, their basic theses are right: the kind of “bad thinking” operative in QAnon circles, anti-vax campaigns, and climate-change denial is well-described as “epistemic stubbornness,” and an education in the humanities, and especially in philosophy, would help stem the tide of this “epidemic” of bad thinking. An otherwise insightful review of Nadler and Shapiro’s book in the Wall Street Journal is wrong when it claims that the authors think too highly of philosophy. The real problem is that they think of philosophy too restrictively. As a result, their description of the epidemic doesn’t go deep enough and their solution to it isn’t expansive enough. What’s missing is something else we can learn from Socrates.

In Book VII of Plato’s Republic (the “Allegory of the Cave”), Socrates tells his conversation partners that “education is not what the professions of certain men assert it to be. They presumably assert that they put into the soul knowledge that isn’t in it, as though they were putting sight into blind eyes.” Socrates’s account of education, by contrast,

indicates that this power [reason] is in the soul of each, and that the instrument with which each learns—just as an eye is not able to turn toward the light from the dark without the whole body—must be turned around from that which is coming into being together with the whole soul until it is able to endure looking at that which is and the brightest part of that which is. And we affirm that this is the good, don’t we?

Shortly before making this claim, Socrates tries to direct his interlocutors’ attention to what he calls the “good beyond being,” which is the transcendent, lovable cause of all existence and knowledge. (Early Christian intellectuals reading this text would say “this is what we mean by ‘God.’”) According to Socrates, education is not about fixing a broken faculty or pouring information into an empty mind. Instead, it is about redirecting an already functioning capacity for thinking so that it’s looking at what really matters. Reason, however, can’t be turned toward the True, the Good, and the Beautiful until everything else in the soul, including our desires and emotions, has been redirected—just as your eyes can’t be directed toward what’s behind you until you move the rest of your body to face the same direction.

If Socrates is right, then the “cure” for bad thinking must be much more radical and holistic than Nadler and Shapiro think it is. They believe the problem lies mostly in the form of one’s thinking (does one abide by the “canons of good reasoning”?) rather than the content (what one thinks about). They want us to hold opinions based on evidence and believe that merely developing the logical tools of reasoning will suffice. This makes it hard for them to answer an important question: Why do even professional philosophers—those most conversant with the rules of logic and the standards of evidence—fall into bad thinking? Of course, many who are susceptible to conspiracy theories and junk science would benefit from the kind of education in logic and scientific reasoning that Nadler and Shapiro promote, but such an education is clearly insufficient. As Socrates argues, the epistemically stubborn need to be redirected from their deficient orientation to reality. One can’t correct wishful thinking without correcting the non-rational part of us that does the wishing. Reason can’t be properly directed until the sub-rational aspects of the human soul are likewise directed toward what’s genuinely true and good. To their credit, the authors do discuss the problem of akrasia—when we know what’s right and yet can’t get ourselves to do it because of the force of some opposed emotion or desire—and they do briefly acknowledge extra-rational motivations in the last few pages of their book. Still, they remain placidly confident that the epistemically stubborn person just needs to start asking herself the right questions.

But how, exactly, would you persuade her to do that? As Jonathan Swift did not quite say, you can’t reason someone out of a belief she didn’t reason herself into. Then too, as G. K. Chesterton argued in Orthodoxy, the conspiratorial thinker, or “maniac,” may suffer not from an absence of reason but from an overabundance of reasoning within a too-narrowly circumscribed worldview. As anyone who has argued with an anti-vaxxer knows, argument and evidence don’t actually work because the anti-vaxxer—especially the kind that goes in for conspiracy theories—can always find a reason to dismiss or dispute the evidence (“the government is covering up the truth!”).

That means we need to look at the ways reason itself becomes diseased, at what motivates motivated reasoning. Following Socrates’s remarks on education, we might say that reason becomes diseased when whatever is sub-rational in the soul takes command over our rationality. Nadler and Shapiro mention this issue in the final paragraph of their book only to dodge it: “These are questions for psychologists to answer.” Of course, it’s true that anyone who wants to understand how our thinking can go wrong should attend to the findings of psychology, but the question at hand is not reducible to psychology or neuroscience. It also involves philosophy, as well as the other humanities and social sciences. Rather than simply passing the torch to the psychologists, or mentioning “political or economic interests” only in passing, Nadler and Shapiro might have asked how such interests prevent us from caring enough about the truth to commit ourselves to the disciplines of careful reasoning.

One can’t correct wishful thinking without correcting the non-rational part of us that does the wishing.
sharetweet

Consider, by contrast, Terry Eagleton’s account in Reason, Faith, and Revolution of radical Islamic terrorism in terms of Western imperial aggression and the political and economic conditions that result from that aggression. These conditions prompt the would-be terrorist into precisely the kind of bad thinking Nadler and Shapiro are talking about. Or consider Michael Sandel’s recent evaluation in The Tyranny of Merit of Trumpist populism in terms of the failures of Reaganite political economy to afford economic security and social esteem to working-class white voters. Eagleton and Sandel both recognize that we don’t think in a vacuum; if we want to understand why people fall for crazy, debunked ideas, we have to understand the material conditions from which their reasoning emerges. And if we want to combat those ideas, we have to address those conditions. That means our approach to the problem must be informed by history, politics, and economics, not just logic and epistemology—important as these are. If there is indeed an epidemic of bad thinking in twenty-first-century America, it may be evidence not only of untrained minds, but a defective society.

When Bad Thinking Happens to Good People
How Philosophy Can Save Us from Ourselves
Steven Nadler and Lawrence Shapiro
Princeton University Press
$24.95 | 240 pp.