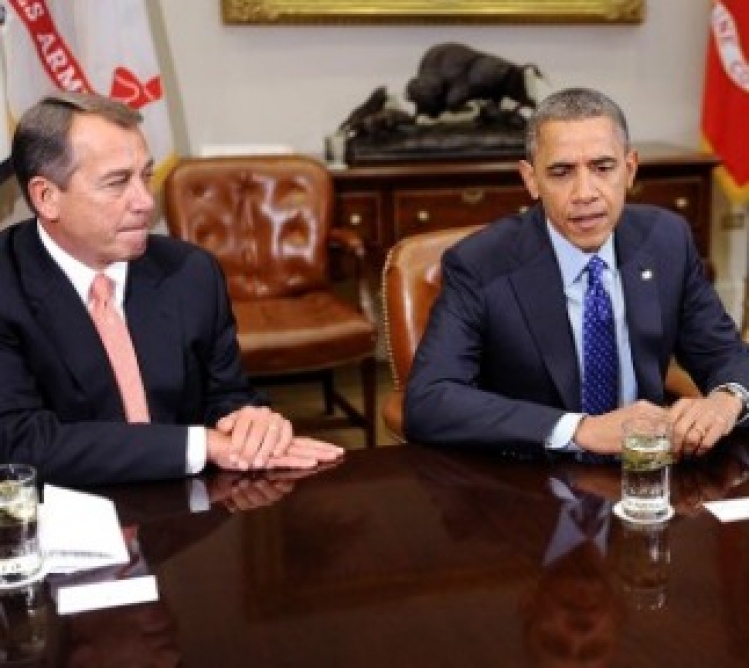 This has to stop.

Ever since they took control of the House of Representatives in 2011, Republicans have made journeys to the fiscal brink as commonplace as summertime visits to the beach or the ballpark. The country has been put through a series of destructive showdowns over budget issues we once resolved through the normal give-and-take of negotiations.

The old formula held that when government was divided between the parties, the contending sides should try to "meet in the middle." But the current Republican leadership doesn't know the meaning of the word "middle," so intimidated has it become by the tea party.

Here is a way out of permanent crisis: President Obama should demand the repeal of all artificial deadlines and tell both houses of Congress that he won't make further proposals until each actually passes a replacement to the sequester -- not a gimmick or something that looks like an alternative, but the real thing.

With everyone on the record, normal discussions could begin and Washington would no longer look like the set of a horror movie in which a new catastrophe lurks around every corner.

The solution to the problems of democracy is more democracy, so let both houses hold votes on all the potential remedies -- on Obama's own proposal, on packages put forward by Democrats Chris Van Hollen in the House and Patty Murray in the Senate, and on anything the Republicans care to proffer, including the sequester itself.

Let the House Republican majority show it can come up with a substantial alternative or, failing that, allow a plan to pass with a mix of Republican and Democratic votes.

In the Senate, ditch the unconstitutional abuse of the filibuster and let a plan pass by simple majority vote. Misuse of the filibuster is a central cause of Washington's contorted policymaking. Let's end the permanent budget crisis by governing ourselves through the majorities that every sane democracy uses.

The air of establishment Washington is filled with talk that Obama must "lead." But Obama cannot force the House Republican majority to act if it doesn't want to. He is (fortunately) not a dictator. What Obama can do is expose the cause of this madness, which is the dysfunction of the Republican Party.

And a staunch conservative has succinctly explained why this problem really is a Republican problem. In an admirably candid interview Monday with Ezra Klein on MSNBC, Ben Domenech, a conservative blogger, said the new tea party Republicans in the House don't want their leadership to sit down with Obama to talk because "they have their doubts about the ability of Republicans to negotiate any better situation."

Read that carefully: We are in this mess because Republicans don't trust their leaders to bargain. Domenech added that many conservatives "don't buy this distinction between smart cuts and dumb cuts," a distinction that is not "all that critical." This is astonishing: Government is bad, so all cuts are more or less the same. And you wonder why we have a crisis?

John Boehner keeps saying that the House has twice voted for ways to replace the sequester. What he doesn't say is that those votes were held in the last Congress, so the bills are dead. If they are so good, why doesn't the speaker bring them up again and pass them now? The answer is almost certainly that he doesn't have the votes. If I'm wrong, Boehner can prove it by calling the question. I'm not worried.

One proposal Republicans are floating would give Obama more flexibility to administer the sequester. Thus, a party that says it can't trust Obama enough to negotiate with him would trust him so much as to grant him exceptional power.

The contradiction is so glaring that Republicans are split on the idea, and it's foolish anyway. As a senior administration official suggested, it's like being told that two of your fingers will be cut off but you could choose which fingers. How is it a "concession" to ask Obama to organize the cuts he says would be a disaster?

The nation is exhausted with fake crises that voters thought they ended with their verdict in the last election. Those responsible for the Washington horror show should be held accountable. And only one party is using shutdowns, cliffs, and debt ceilings as routine political weapons.