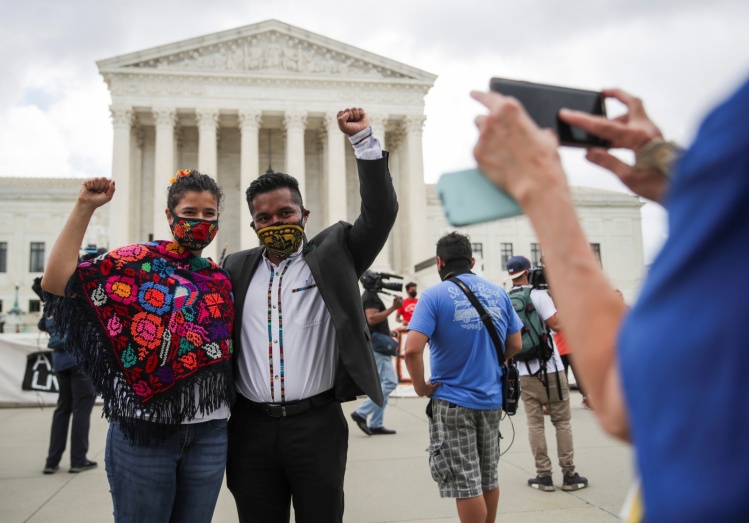 Gabrielle Betances and her husband, Luis Aguilar, a DACA recipient from Mexico, pose for a picture near the U.S. Supreme Court building in Washington June 18, 2020. (CNS photo/Jonathan Ernst, Reuters)

When President Trump ordered an end to the Deferred Action for Childhood Arrivals (DACA) program in September 2017, around 700,000 people who had grown up in this country were suddenly faced with the prospect of deportation. Under DACA, which was implemented by the Obama administration in 2012, many undocumented U.S. residents who were brought illegally to this country as children before 2007 would not be deported and could receive a work permit—as long as they first passed a background check, and had finished high school or served in the military. Former Attorney General Jeff Sessions called DACA an unconstitutional executive overreach that sidestepped existing immigration laws. President Trump said DACA recipients were stealing jobs from citizens: “millions of Americans” had been “victimized” by the program.

This June, the Supreme Court ruled five to four that the Trump administration’s decision to end the program was “arbitrary and capricious,” and that the Department of Homeland Security had therefore violated the Administrative Procedure Act. Conservative Chief Justice John Roberts joined the court’s four liberal Justices and wrote the majority opinion. Roberts has expressed concern that the Supreme Court is perceived as too partisan, but President Trump has no such compunctions: “These horrible & politically charged decisions coming out of the Supreme Court are shotgun blasts into the face of people that are proud to call themselves Republicans or Conservatives…. Vote Trump 2020!” he tweeted.

Deporting DACA recipients, most of whom are now in their twenties, would be a logistical nightmare.
sharetweet

In fact, DACA is popular among both liberals and conservatives; one CBS News poll found that 87 percent of Americans support it. For better and worse, DACA recipients have long been political posterchildren, stereotyped as hard-working valedictorians. That portrayal, if not entirely accurate, is at least preferable to right-wing caricatures of dangerous DACA criminals.

Deporting DACA recipients, most of whom are now in their twenties, would be a logistical nightmare. They’ve been integrated into American society: they’ve purchased homes, earned college degrees, and gotten married. They are the parents of about 200,000 U.S. citizens. Who will care for those children if their parents are deported? The program’s end would also be an economic loss. In 2017, 93.3 percent of DACA recipients were employed, paying billions of dollars in taxes. Nor do DACA recipients drain federal resources; they aren’t eligible for programs like SNAP, Medicaid, and financial aid.

“The dispute before the Court is not whether DHS may rescind DACA,” Roberts wrote in his majority opinion. “All parties agree that it may.” In other words, the status of undocumented childhood arrivals remains precarious. To provide more permanent protection, Congress must move on the Development, Relief, and Education for Minors (DREAM) Act, various versions of which have stalled out for nearly two decades. The bill currently under consideration would provide a path to citizenship, not just temporary work permits; it would allow a record of sustained employment to substitute for a high-school diploma; and it would make it easier for DREAMers to attend college by letting them receive financial aid and benefit from in-state tuition rates.

From time to time President Trump has signaled support for such legislation, calling DREAMers “terrific,” and championing a “bill of love.” But who knows if he would push for the DREAM Act against the wishes of his hard-line advisors. What we do know is that his administration has made immigrants scapegoats for all kinds of problems, real and imagined. It has presented immigrants as a threat to public health (potential carriers of “Kung Flu”), as criminals who require robust policing (“bad hombres”), or as leeches undeserving of a visa. They’re so dangerous that they can be treated only with cruelty—denied asylum, kept out with a border wall, or deported to a country they left behind as children, a place that’s never been home.