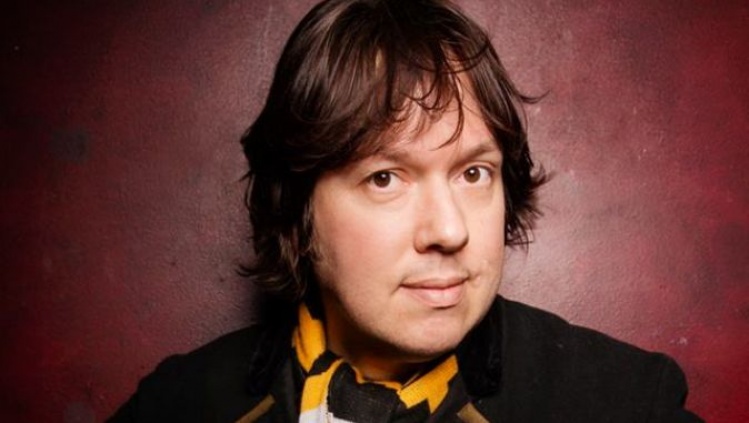 Dave Hill’s Dave Hill Doesn’t Live Here Anymore is a collection of essays about a more-or-less grown man—Dave Hill—who’s stumbled through his life and managed to make something of it, if not total sense. The straight-faced boyish humor and oblique Midwestern sentiment pervading these twenty short pieces is hinted at in Hill’s concise three-line preface: “This is a book about journeys, both physical and mental as well as emotional and spiritual. I also end up running a few errands. I need you to be cool with that.” And if you are (I was), you’ll also find something deeper among the laughs.

Hill, a comedian, actor, writer, musician, and regular presence on NPR’s This American Life, takes on familiar topics like familial relationships and career concerns but imbues them with his distinct sensibility, shaped in no small part by his upbringing in suburban Cleveland as one of five children in an Irish-Catholic family. And every once in a while, he breaks away to tell absurd, nearly unbelievable stories about things like having a Gatorade-bottle of urine thrown on him by a homeless man, writing a ringtone jingle for (and meeting) Donald Trump, or trying to play it as cool as his compatriots after receiving death threats while visiting his priest friend—a prison chaplain—in Mexico.

But there’s a tender thread running through the collection: the death of Hill’s mother, with whom he was especially close. Her loss, however, also gives him “the opportunity to get better acquainted with my dad, this mysterious man I’d been running into down in the basement all these years.” A handful of essays chronicle Hill’s trips back to Cleveland to visit his newly widowed father and, later, help move him into a retirement community: “Traveling Men,” “Quality Time,” and “All Things Must Pass” capture the clumsy process of two adult males learning how to be in a relationship with each other in new phases of their lives. Hill discovers in the process that his father loved to travel; that as a young man he had hopes of being an artist; that he has a serious gluten intolerance (or at least “sure seems to think so”); and that he dreams of driving an eighteen-wheeler before he gets much older. I’m reluctant to say these essays are “touching,” but there’s something true and refreshing about the ordinary intimacies Hill describes.

My personal favorites are those in which Hill tells stories from his childhood, which as a Midwesterner from a big, Catholic family (also one of five, though a Minnesotan) I find all too familiar. The typical tedium so accurately rendered in the following brought me back to my childhood the way the memory of a favorite meal might transport other people:

“Shut up, David!” my brother groaned, this time elbowing me in the ribs for emphasis. “You’re scaring the fish again!” And then I was all like, “No, I’m not,” and elbowed him back.

And then he was all like, “Yeah, you are!” and elbowed me a second time.

And then I was all like, “Well, maybe you are,” only that time I intentionally didn’t elbow him just to mess with his head.

This exchange is from “My Old Man and the Sea,” an account of Hill’s sudden obsession with the Red Lobster restaurant chain after seeing some particularly enticing television commercials, in which “[l]obster tails, unburdened from their shells and glistening with melted butter, were baptized in slow motion by a climaxing lemon wedge presumably squeezed from the mighty hand of Poseidon himself.” Hill’s begging went for naught; instead of taking him to Red Lobster, his father offered a fishing trip. Hill recalls waking early, going to the bait shop, then heading off to the fishing spot and waiting listlessly for a bite. Miraculously, he ended up catching a fish (though catching the fish is not the end of the story). In another piece about his childhood, Hill chronicles his commitment to learning Led Zeppelin’s Stairway to Heaven so he can “melt faces” at the talent show.

Hill in fact came to lead a rock band that is, as the old joke goes, big in Japan (and elsewhere). That band, Valley Lodge, provides the opening theme for John Oliver’s Last Week Tonight, while Hill himself recently performed some political tunes for Full Frontal with Sam Bee. But it’s his impressive comedic storytelling that remains center-stage here. He is a master of the self-knowing, self-deprecating kinds of narratives John Hodgman or Tina Fey might spin, though Hill’s style is sillier and more, well, boyish. He packs both punch lines and long, tangential anecdotes into footnotes, creating a droll dynamic in which the established voice of the narrator is regularly interrupted, corrected, and even undermined. Given that pretty much every piece had me laughing on packed subway cars, I’d strongly advise that—if you have an aversion to looking dumb in public—you not read this book outside the privacy of your home.

Ultimately, reading Dave Hill Doesn’t Live Here Anymore is like spending time with an old friend (but a very funny one) who’s going through the things one naturally faces in adulthood. By the end, there is the sense that Hill has indeed done some growing up—which is not to say maturing, thank goodness. By depicting both the bouts of misfortune and the strokes of luck he’s encountered to this point, Hill offers a hilarious midlife coming-of-age story.