The Cut of Their Jib

A history of pirates past and present
By Regina Munch
Books 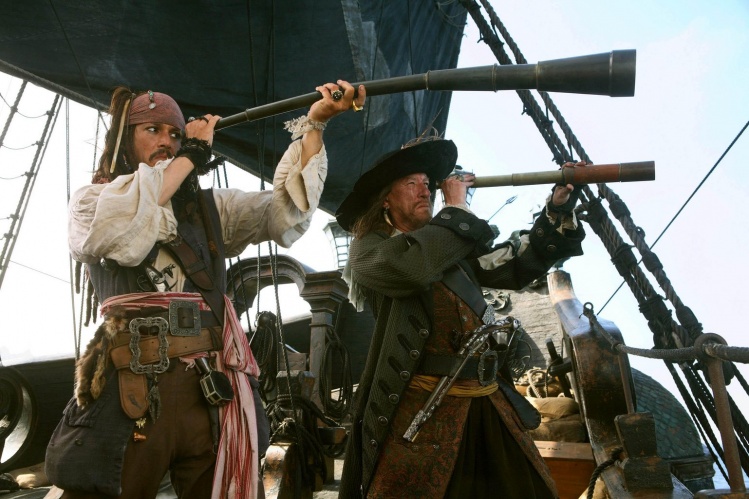 Disney’s Pirates of the Caribbean franchise has familiarized us with the devious and delightful Captain Jack Sparrow, whose swaggering good humor and wistful philosophizing sit firmly in the long tradition of romanticized piracy. “Wherever we want to go, we’ll go,” he famously declares. “That’s what a ship is, you know. It’s not just a keel and a hull and a deck and sails—that’s what a ship needs. But what a ship is…is freedom.”

The dashing, Johnny Depp-ian swashbuckler may live in our stories, but that’s about it, writes Peter Lehr in Pirates: A New History, from Vikings to Somali Raiders. He explores the history of piracy—the “action of committing robbery, kidnap, or violence at sea or from the sea without lawful authority and for private gain”—since the eighth century in three historical hotspots of piracy: Northern Europe, the Mediterranean, and East Asia. And he determines that the motivation for “turning pirate” has rarely had anything to do with a yearning for open waters. “Piracy was not so much about romanticism and adventure as about greed and grievance, with some measure of creed or religion thrown into the mix,” he writes. “What made individuals become pirates was an exercise into rational choice that included factors such as current living conditions, expected returns from piracy, and the probability of getting away with it.”

Often, it is the downtrodden of a particular society who turn to piracy when their luck on land runs out. Whether the eleventh-century Orang Laut pirates raiding ships in the Straits of Malacca, or Blackbeard disrupting Britain’s colonial trade in the Caribbean, or today’s Nigerian pirates siphoning crude oil from a tanker, those who become pirates have made the calculation that the potential reward outweighs the risks—or the losses of remaining law-abiding. Another feature of piracy is the “gray area” that many pirates occupy. The difference between a pirate and a privateer, one commissioned as a raider by a state power, is often hard to distinguish. From the pirates’ perspective, a crew could operate freelance one day and take a legal job the next—whichever might be the most profitable. That’s just what medieval pirate Eustace the Black Monk did, abandoning his Benedictine monastery for a combination of piracy and privateering, switching allegiances between the English and the French depending on the price. Some pirates lowered the Jolly Roger when the authorities hired them to hunt pirates instead—like the seventeenth-century Welsh privateer Henry Morgan, who not only went on to become the lieutenant governor of Jamaica but has also been immortalized on an eponymous brand of rum.

Lehr examines the three historical periods in which piracy flourished. In the first era, from 700 to 1500, piracy was found in various parts of the world, but activity tended to be localized. Regions with islands were especially conducive to ambushing a passing ship or terrorizing affluent coastal towns. In Northern Europe, the Vikings raided settlements and monasteries; other loosely organized groups of privateers-turned-pirates known as the Victual Brothers roamed the Baltic and North Seas. Mediterranean piracy was rampant as well, particularly in the Greek islands during the Crusades: religion proved to be a powerful motivator, as Christian and Muslim pirates saw raiding the other side’s ships as a kind of divine duty. In East Asia, Wako pirates sailed in massive, intimidating fleets along the coasts of China, Korea, and Japan. In an era of localized trade and relatively decentralized territorial control around the world, pirates didn’t need to venture far to strike it rich.

Those who become pirates have made the calculation that the potential reward outweighs the risks—or the losses of remaining law-abiding.
sharetweet

It’s in the second era, which Lehr marks from roughly 1500 to the beginning of World War I, that piracy became a truly global phenomenon. This is the period from which our images of romantic piracy spring: Caribbean islands flush with booty, sword battles and cannon volleys, galleons laden with jewels and doubloons. And though some pirates of this period did find riches, most didn’t. Drowning, starvation, a violent death on the job, or punishment by the authorities were more likely. But on average, writes Lehr, a “successful” pirate could make five times that of a law-abiding sea trader. And with the globalization of maritime trade as European empires expanded into the Americas, pirates had an abundance of new targets. At the same time, profits from colonization in the Americas led to the collapse of Eurasian trade, particularly in the Mediterranean—giving already impoverished land-dwellers greater reason to consider a career in piracy.

For centuries, Lehr notes, states had punished, excused, or co-opted piracy as they found it advantageous. But as European empires grew in military and economic strength, so too did their use of privateering to sabotage rival powers. Elizabeth I of England, known sometimes as the “Pirate Queen,” elevated privateering to a vital tool of statecraft, commissioning both Walter Raleigh and Francis Drake to disrupt Spanish commerce on land and on sea. (Drake, whom Elizabeth dubbed “her pirate,” was one of the highest-earning pirates of all time.) Often, when wars officially ended, maritime battles might continue, fought by hired raiders serving as a sort of unofficial navy while providing a government with plausible deniability. And just as Muslim and Christian pirates saw religious difference as a justification for plundering and fighting, so too did post-Reformation Catholic and Protestant pirates.

Meanwhile, as European nations extended their empires into south and east Asia, their vessels became the targets of local pirates.The most famous in this region was the Chinese pirate lord Zheng Chenggong, known in the west as Coxinga, who became a national hero when his crew, fighting for the Ming dynasty, cast the Dutch out of Taiwan and established their own pirate kingdom. In India, Kanhoji Angre led exploits against the British East India Company in defense of the Maratha empire.

Nevertheless, European imperialism was too great a match for figures like these, and the golden age of piracy came to a close. As much of the world fell under the control of European governments, there were fewer havens for operating outside the law, and the transition from mercantilism toward free trade reduced the need for privateers that would sabotage an enemy. As the twentieth century progressed, piracy seemed to be receding into the past.

That is, until the 1980s and ’90s, which are the focus of Lehr’s final section. Here he examines the modern-day pirates operating in Somalia, Nigeria, and the Indian Ocean. Why did piracy see a global resurgence? For many of the same reasons as in previous centuries: an increase in global maritime trade, this time via container shipping, and a decrease in opportunities for people to sustain themselves legally on land. “When listening to the stories of rank-and-file modern pirates,” Lehr writes, “it quickly becomes clear that in those parts of the world that have not profited from globalization and modernization, and where abject poverty and the daily struggle for survival are still a reality, the root causes of piracy are still the same as they were a couple of hundred years ago.”

Pirates, then or now, aren’t what we like to pretend.
sharetweet

Indonesian, Nigerian, and Somali fishermen have all turned to piracy after seeing calamitous declines in catches because of ocean pollution and international poaching. Somali fishermen first organized themselves into gangs in the late 1990s to defend their waters from the high-seas trawlers that had come to fish illegally, for which they were celebrated as heroes. But it didn’t take long for these fishermen to “turn pirate” once they realized the riches to be had in ransoming the crews of captured foreign vessels. The second wave of Somali piracy, from 2008 to 2012 (whose most notorious target was the Maersk Alabama and its crew, led by Captain Richard Phillips) was motivated purely “by the lure of easy money,” writes Lehr. An expert in terrorism studies, Lehr is at his best in this third section; his knowledge is evident in his descriptions of the conditions and tactics of a modern-day pirate raid, the security measures vessels should take to deter piracy or defend against an attack, and the international naval strategies meant to rid the seas of raiders.

Pirates is daring in scope and thrillingly thorough, yet at the same time can suffer from a lack of orientation and scale. Because the lens of analysis shifts so quickly—around the map, among historical figures, and sometimes forward or backward in time—it is hard to get a sense of where and when piracy was the most active, the most lucrative, or the most dangerous to ordinary people, or how popular a choice it was for the common man (or, sometimes, woman) at a given time. It’s also not clear why Lehr’s study begins in the 700s, especially when piracy was notoriously rampant in the ancient Mediterranean world. Do these pirates fit into the categories Lehr defines?

Perhaps pirates, then or now, aren’t what we like to pretend. Lehr illuminates the motivations and experiences of real pirates, and their interactions with the world around them. Piracy has waned in recent years, thanks to a multinational naval alliance that patrols the waters where pirates have tended to prowl. But, Lehr writes, it’s only a matter of time before it returns. As long as there are conditions that nourish it—social instability, lack of opportunity, and a decent chance of getting away with it—“piracy will stay with us probably as long as there is maritime trade.”