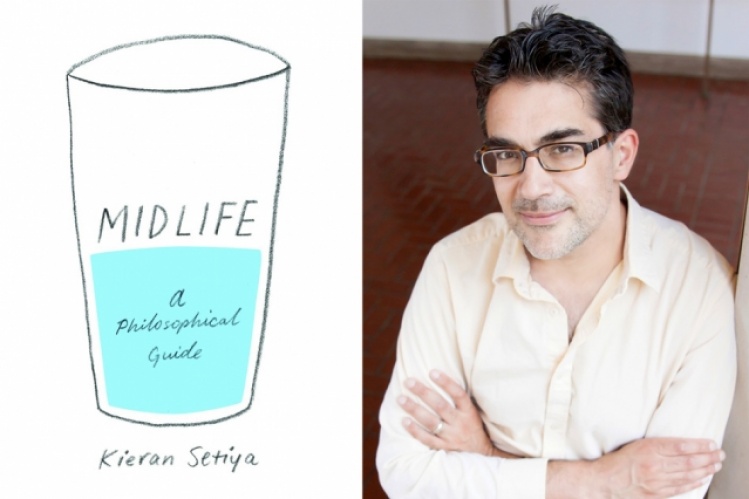 In the 2004 Alexander Payne film Sideways, two forty-something men take a roadtrip through the Napa Valley, getting sauced and wallowing in disappointment. Miles (Paul Giamatti), in one of his particularly self-loathing moments, shares his view of midlife with Jack (Thomas Hayden Church): “Half of my life is over and I have nothing to show for it. Nothing...I’m a smudge of excrement on a tissue surging out to sea with a million tons of raw sewage.”  Jack, trying to be supportive, responds: “See? Right there. Just what you said...that is beautiful. ‘A smudge of excrement, surging out to sea.’”

Is this what midlife is destined to feel like? I recently turned thirty-five, and I will confess I find Miles and Jack outrageous. Sideways outrages me. They are blind to the value all around them: Jack has his fiancée, Miles his transcendent Burgundies. They are unsympathetic: their problems exacerbated by their poor decisions and stubbornness. Still...perhaps this is just the reaction of someone too young, too naïve, and too moralistic to properly understand the gravity of the midlife crisis.

In Midlife: A Philosophical Guide, MIT philosopher Kieran Setiya urges us to take the midlife crisis seriously as a special kind of crisis of value. Setiya is sensitive to how indulgent midlife crises can seem from the outside. He offers both a diagnosis of the problem and argues for a therapy for those caught in its nihilist grip. Along the way, he describes his own existential struggles in witty and deeply humane asides.

Setiya’s ambitions are philosophical rather than clinical. What is it about how we think of value and time that makes the midpoint of life so hard? Here (in brief) is his answer: At midlife, you are in a position to look back on major life decisions you have made or life paths you have fallen into. For instance, Setiya ended up a philosopher, but as an adolescent he could have been a poet or a doctor. You may try to compare your alternatives at midlife, to reassure yourself you’ve chosen well. But these different lives are not really comparable, so you have little justification at midlife for believing you’ve ended up on the best path. And you have fewer choices ahead of you now. So one source of distress in midlife is realizing that some of the options for your life projects have permanently expired and there is no way to tell if you’ve ended up on the best path.

Another source of distress is regret for some of the choices you’ve made in the first half of life that have committed you to your current path—choices you now realize were wrong. For instance, your midlife might be shadowed by a failed marriage or an unfulfilling career.

Finally, at midlife you are reminded of your finitude. The inevitability of death raises questions about whether your life is pointless, since every project you pour yourself into will ultimately end. Middles bring ends into view.

A philosophical diagnosis calls out for a philosophical treatment. And to his credit, Setiya offers a lot of specific and rich guidance. First, you should realize that the single-minded pursuit of your own happiness is likely to be self-defeating. Second, you should distinguish between telic value (the kind of value you get from advancing toward a goal or accomplishment) and atelic value (the kind of value you get from simply being immersed in an activity). Setiya argues that atelic value is a safer bet as a pursuit in midlife, when you are most likely to grow bored by past accomplishments but feel too trapped to set out toward radically new ones. You must remind yourself at midlife that “you are not (only) what you plan to get done.” Third, you should focus on the present value that your past choices (even ones you now regret) have wrought. For instance, that failed marriage might be a precondition for having children that you deeply love. A failed career might have been a necessary condition for living in a city that feels like home. At the end of the book, Setiya also pitches mindfulness meditation as a way of learning to appreciate atelic value.

Midlife is an erudite and charming addition to the genre of “philosophical self-help.” (And if there were an award for Best 2017 Philosophy Book Cover, Setiya’s cartoon of a half-empty water glass would surely win. Not that there is much competition.) Still, as an admittedly judgy borderline early-lifer, I found the book left some of my most pressing questions about midlife unanswered.

Nobody disputes that midlife crises are diagnosable. What I want to know is: Are they rational?
sharetweet

First, nobody disputes that midlife crises are diagnosable. What I want to know is: Are they rational? Is there some special way that value in life changes around your forties and early fifties? Is Miles just a buffoon? On the view of the crisis Setiya offers, it would be rational if (1) there are indeed fewer options one can pursue in midlife and (2) it is rational to regret choices you’ve made and now cannot undo.

As to (1)—the foreclosed options—we should first note there is no law against studying medicine after the age of forty. Setiya might need to do it in the Virgin Islands, but it is still possible. Someone can absolutely start a literary career at midlife, as Raymond Chandler, George Eliot, and others have. It might feel like these options are foreclosed, but this only shows a lack of imagination on the part of the crisis sufferer. What Setiya cannot do is make it so he’s lived three incompatible lives (one studying medicine at twenty, one studying poetry at twenty, and one studying philosophy at twenty). But he has always known he’d only get one life, with one sequence of pursuits—this is not something you suddenly discover in midlife. If the midlife crisis is simply suddenly preferring the impossible, then it seems it is irrational.

What about (2)—the regret aspect of midlife? Some philosophers think it is only rational or irrational to have preferences about what you can control. Since you can’t control the past, you can’t have any rational or irrational preferences about your past marriages or jobs. Here I disagree with these philosophers. Being rational is just a matter of appreciating your reasons, and part of being a decent and well-functioning person means acknowledging that sometimes you chose against your best reasons. Midlife regret can be rational—but that doesn’t make midlife special. Rational regret can and should occur at any age when we realize we’ve chosen poorly. Perhaps what’s distinctive about midlife is that we have a better grasp of the reasons we ignored. And Setiya’s therapy (appreciating any good long-term side effects of our poor decisions) is more available later in life. But both of these are true at the end of our lives as well.

Could the special rational challenge of midlife be time itself? At midlife, half of the allotted time for achieving things with your life is over. Setiya assumes that being in the past automatically makes an accomplishment less valuable to you now: “Accomplishments matter to me, but each one is bittersweet: longed for, pursued, and ultimately, disappointingly, complete. That’s over with. What now?” But this isn’t obvious; some events might add durable value to your life. Consider a thought experiment proposed by philosopher Thomas Hurka in his book Perfectionism (Oxford, 1996). Imagine you have temporary amnesia. You wake in the hospital, and are told you are in one of two situations. Either you made an amazing scientific discovery several years ago. Or you are set to make an okay but far less impressive discovery a few years from now. Which situation do you hope to be in? Hurka says (and I agree) that we’d want the greater past discovery—we want the grandest accomplishments possible but don’t particularly care if they are past or future. More technically: while we care less about hedonic values like pain and pleasure once they’re in our past, we don’t tend to similarly discount our achievements.

Setiya’s model assumes that at midlife, the telic value of your past activities leaks out of your life. You can plug the leak by cultivating mindfulness. Why believe this is the dominant option? A retiree who throws herself maniacally into writing poetry, or traveling the world, or teaching second grade, can be in a position to experience just as much value as someone who cultivates atelic mindfulness. And while we cannot alter the first halves of our lives, we have extraordinary freedom at midlife to craft a valuable future.

So Setiya’s book didn’t make me any more sympathetic to the sufferers of the midlife crisis. But philosophy is not merely in the business of rationalizing. In the Phaedo, Plato argues that philosophy is important insofar as it can teach us the art of dying. While Setiya offers us little guidance about whether despair in midlife is rational, he does instruct us in how to have a more artful and intellectually sophisticated crisis.  And he offers some sound philosophical advice for cultivating value at any age.

Meghan Sullivan is the Wilsey Family Collegiate Professor of Philosophy at the University of Notre Dame and director of the Notre Dame Institute for Advanced Study. Her book, Time Biases (Oxford University Press), has just been released in paperback.