The Biden administration should resettle more refugees.
By The Editors
Immigration
Joe Biden 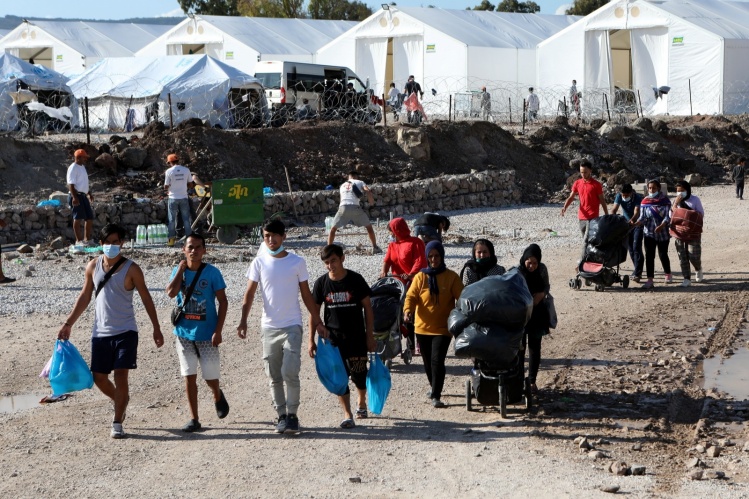 Migrants walk with their belongings to the Kara Tepe refugee camp on the Greek island of Lesbos, October 14, 2020 (CNS photo/Elias Marcou, Reuters).

Just what is Joe Biden’s plan for resettling more refugees in the United States? It’s a fair question to ask after a confusing series of statements from the administration within a few hectic hours on April 16. First, the president announced that he would maintain the Trump administration’s historically low cap, limiting entry to 15,000 refugees per fiscal year. This was a reversal of his pledge on the campaign trail and of the executive order he signed in February, which significantly raised the ceiling for this fiscal year and next. The announcement came as a surprise to both centrist and progressive Democrats and generated an immediate outcry. Sen. Dick Durbin of Illinois condemned the move as unacceptable, while New York Rep. Alexandria Ocasio-Cortez declared it “flat-out wrong.” Humanitarian groups called it a betrayal. The administration soon walked back the statement, suggesting the cap would in fact be raised this year to the previously promised figure of 62,500. But then, before the day was out, White House Press Secretary Jen Psaki said that while the administration would aim to admit more refugees by the end of 2021, meeting Biden’s promise of 62,500 “seems unlikely,” and that a revised ceiling would be determined by May 15. As a clarification, it didn’t add much clarity. Once again the future of thousands of refugees who have waited years to begin new lives in the United States was cast into doubt.

Just as alarming were the administration’s tortured explanations for reneging on its promise. It cited health risks presented by the pandemic. It blamed its predecessor for leaving behind a “decimated” and “shattered” system, asserting that the resettlement program would need a complete overhaul in order to process a higher number of refugees—a claim immediately refuted by aid agencies that say they are sufficiently prepared to handle an increase in arrivals. It also tied the decision to the increase in the number of people seeking asylum at the southern border; reprising this argument the next day, Biden said his administration “couldn’t do two things at once.” But this is misleading. While the U.S. Department of Health and Human Services oversees resettlement of both refugees and unaccompanied migrant children, these two distinct groups of people are processed through two different government agencies, each with its own budget and personnel. Unlike those who come to the border seeking asylum, refugees are vetted and approved for resettlement prior to coming to the United States. The Biden administration’s attempt to link these two different groups of people fooled no one, and critics rightly pointed out it was the same specious argument the Trump administration used to justify its unprecedentedly restrictive measures.

As to how the administration got itself into this mess, the simple explanation is political timidity.
sharetweet

As to how the administration got itself into this mess, the simple explanation is political timidity. It’s true that most Americans disapprove of Biden’s handling of immigration at the southern border. It’s also true that Republicans, suddenly concerned about unaccompanied minors arriving from Central America, have hurried to grandstand on what they’ve labeled “Biden’s border crisis.” Even so, the president should stick to his original promises on refugees. Over nearly four decades following passage of the Refugee Act of 1980, the United States resettled an average of 80,000 refugees a year. By the end of the Trump presidency that number had fallen to 11,000, less than one-half of 1 percent of the world’s 26 million refugees—the highest number ever recorded by the United Nations. We can obviously do more. Many Americans appalled by the xenophobic cruelty of the Trump administration voted for Biden at least partly because of his pledge to restore America’s reputation as a haven for the persecuted and displaced. Catholic, Lutheran, Evangelical, and other faith-based organizations celebrated his February order raising the limit for refugees, and praised him for recognizing the need to welcome and protect the vulnerable. The president shouldn’t allow cynical Republican criticism to derail a plainly humane and morally imperative mission.

There’s an easy way to get things back on track, beginning with a clear restatement of the reason for that mission. The United States should immediately admit the approximately 35,000 refugees around the world already cleared to come to the United States, many of whom have been waiting in limbo for years and have experienced needless additional suffering as a result. Biden should also restore the ceilings specified in the February executive order—62,500 refugees in this fiscal year, 125,000 in the next. This would signal to the world, as well as to Republicans, that the administration is serious about its commitment. “A nation that is willing to accept the refugee or the harmed or the frightened, to me is a great nation,” said former president George W. Bush in an interview shortly after the administration’s flip-flops. It would be better to hear it from President Biden, who has both the opportunity and the obligation to act on the courage of his previously stated convictions.

Letters | Stories of sin and redemption