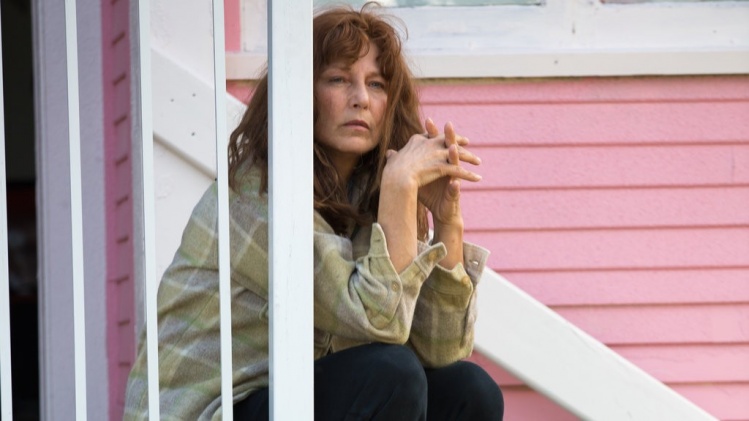 Little Pink House, a film by Courtney Balaker, depicts the true story of a Supreme Court case that tested, and ultimately reshaped, the use of eminent domain in the U.S. Based on the book by Jeff Benedict, the film suffers from its oversimplifications. But sometimes a movie matters more as civics than cinema.

The story of the case, Kelo v. City of New London, begins in the 1990s, when New London, Connecticut—a former whaling city whose fortunes declined badly over the twentieth century—sought to create a glitzy downtown development anchored by a convention center and a research facility run by Pfizer, the pharma giant. To do this, the city needed to bulldoze a down-at-the-heels working-class neighborhood known as Fort Trumbull. I know this setting well, having grown up in New London in the 1960s and ‘70s; a childhood friend lived in Fort Trumbull, and my family’s favorite Italian restaurant, Hughie’s, was located on its fringes. Two decades later, Pfizer, having made a fortune marketing Viagra, sought to take over the neighborhood. Most residents agreed to be bought out, but a core of refuseniks held out, led by a paramedic named Susette Kelo (played in the film by Catherine Keener). Her nemesis was Claire Gaudiani (Jeanne Tripplehorn), the leader of the city’s development group orchestrating these buyouts. And so my hometown hosted a lopsided face-off between the little blue pill and the little pink house.

Kelo was the first significant eminent-domain case argued before the Supreme Court in two decades. Historically, eminent domain had been used to create structures and amenities—roads, bridges, tunnels, public buildings—for what the Fifth Amendment calls “public use.” But gradually, in the second half of last century, municipalities extended their use of the policy. The groundwork for this expansion was laid in a 1954 Supreme Court decision, Berman v. Parker, which held that the economic benefits of private development can amount to a legitimate public use, and authorized a municipality (Washington, D.C.) to use eminent domain to transfer private property to a development corporation for the purpose of eradicating blight and facilitating modernization. Unsurprisingly, under this kind of pressure, the definition of blight proved elastic; as George Will writes in a recent article on the film, “corporations in cahoots with city governments found blight in cracked sidewalks or loose awning supports.”

To justify taking Susette Kelo’s house, New London put forth blight remediation as well as a more amorphous rationale, citing Berman to argue that “public use” and “public benefit” were one and the same. In other words, if the public could be shown to benefit from a private development in a greater-good kind of way, then that development effectively constituted a public use.  Other controversies were taking shape along similar lines. Around the same time Kelo was being argued, the town of Long Branch, New Jersey tried to seize several-dozen waterfront cottages in order to build not a bridge or highway, but an upscale condo development. Also citing Berman, Long Branch officials argued that the redevelopment of an urban area is a public purpose. Central to all these arguments was the lure of bulked-up tax revenues generated by upscale new developments.

Little Pink House draws out its oppositions in obvious terms with conniving politicians and developers on the one hand, and the hardworking citizens who heroically resist their depredations on the other. Thus we see Kelo in jeans and a sweatshirt, banging nails around her ramshackle cottage and supping on pizza and beer, even as sleekly dressed politicians and developers and corporate CEOs meet in pricey restaurants to dine on lobster, drink wine, and darkly machinate. Such clarities constitute a missed opportunity.  Might there be a better case to be made for the city’s action—or at least, a better way of presenting it—than oily insincerities about “partnerships” and embarrassing pep talks for “a new vision for a New London that is vital and hip”? The issues are presented without nuance; it’s craven ambition versus neighborly virtue.

The stage seems set for a stirring court drama followed by a rousing victory, but Hollywood didn’t script the actual history
sharetweet

That said, the basic point is delivered persuasively. When a realtor working for the city shows up with “great news!” and informs Kelo that New London will pay 15 percent over market value, Kelo compliments her on the locket she’s wearing around her neck, and then—when the woman mentions that it’s a family heirloom—offers her money for it. Will she take $500? $1000? In another scene, Gaudiani tells a public forum that New London is doing all this in order to help the city’s poor. “Social justice and economic development, they go hand in hand,” she intones, as the crowd hoots in derision. “You’re going to solve homelessness,” one man shouts, “by kicking people out of their homes?”

The stage seems set for a stirring court drama followed by a rousing victory, but Hollywood didn’t script the actual history. Though ably represented by lawyers from the libertarian Institute for Justice, Susette Kelo lost twice: first in the Connecticut Supreme Court, and then in the U.S. Supreme Court, which in a 5-4 decision in June 2005 ruled that the benefits a community receives from economic growth via private redevelopment can qualify as a public use under the takings clause of the Fifth Amendment. The Fifth Amendment does not demand “literal” public use, the majority said, but merely the “broader and more natural interpretation of public use as ‘public purpose.’”

The dissent, written by Justice Sandra Day O’Connor and joined by the Court’s conservatives (Rehnquist, Scalia, and Thomas), warned about a “reverse Robin Hood” —taking from the poor to give to the rich. “The specter of condemnation hangs over all property,” O‘Connor wrote. “Nothing is to prevent the State from replacing any Motel 6 with a Ritz-Carlton, any home with a shopping mall, or any farm with a factory.” For many liberals—typically allergic to the reverse Robin Hood—the ruling was awkward, and made for strange bedfellowship with the conservatives on the Court.

The court decision was certainly a setback: but ultimately, the holdout homeowners won the war in spite of losing the battle. Prior to Kelo, only seven states specifically prohibited the use of eminent domain for economic development; a decade later, no fewer than forty-two had enacted reform legislation placing limits—in some cases severe limits—on the power of municipalities to invoke eminent domain for economic development. Five years after Kelo, Long Branch abandoned its attempt to take the properties. The trend was reflected in other court decisions, like City of Norwood v. Horney, in which the Ohio Supreme court voted unanimously that economic benefit alone was insufficient, and blight too vague, to satisfy the state’s eminent domain statute.

Little Pink House sacrifices certain complexities. The neighborhood depicted in the film is in much better shape, and much more densely populated, than the actual Fort Trumbull area was. The challenges New London faced—its miniscule grand list, a heavy concentration of social services and tax-exempt properties—kept the city in near-bankruptcy and led to understandable desperation among city leaders.

And the Institute for Justice is not simply the white-knight outfit the film depicts. Created by Charles Koch, it agitates for private-school tax credits and vouchers, against public financing of political campaigns, and for other causes identified with the right. My friend and fellow native New Londoner, Gary Greenberg, wrote about the Norwood, Ohio case in Mother Jones; while his article was sympathetic to homeowners faced with seizure there, a dozen-plus years later, he believes that the real story—in Kelo as well as in the Ohio case—lies in the mission of the Institute for Justice. The Institute, Gary says, knew it wasn’t going to win Kelo. “IJ's lawyers fully understood that they would not get the Supreme Court to reverse two hundred years of its own jurisprudence. Their real agenda was to stir up the commonweal against government regulation.” That agenda anticipated the Tea Party and the wave of drain-the-swamp pseudo-populism that washed over us in 2016.

As for New London, the city ended up with the worst of both worlds. When the dust of litigation finally settled, the money had moved on, and the grandiose project planned for Fort Trumbull never got built. No new jobs or tax revenues, and where my old restaurant, Hughie’s, once stood, just a lot full of weeds and crumbled pavement. The city had demolished a neighborhood for naught, at a cost of almost $80 million. Was it—is it—constitutional for a city to take private property merely to generate higher tax revenues? The courts said yes; but the empty brownfield that was once Fort Trumbull reverberates with the ghosts of outraged citizens shouting “No!”