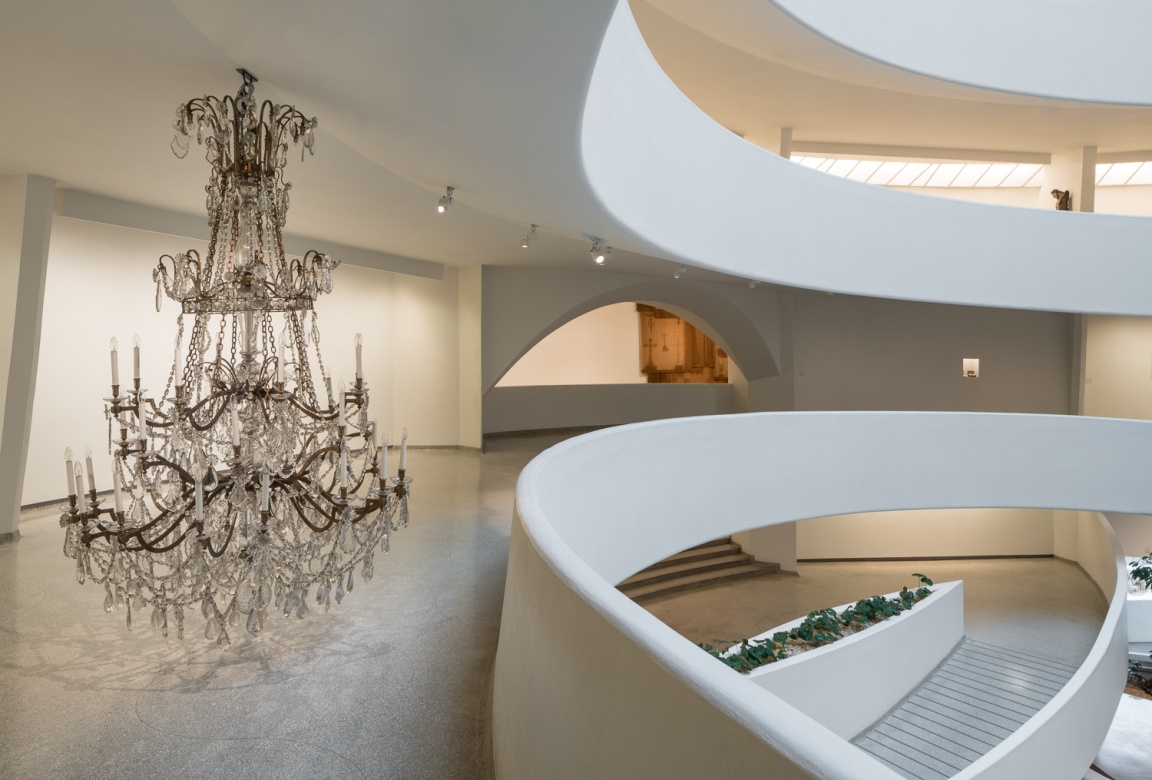 Christ in the Wreckage

Part of a visual pilgrimage toward Easter, this piece is the sixth in a series of spiritual meditations by Griffin Oleynick, who will visit a different art gallery each week through the season of Lent. Catch up on past installments here.

Danh Vo: Take My Breath Away, on view at the Guggenheim Museum in New York City, February 9 through May 9, 2018

Of the many works I’ve been able to view in New York City museums this Lent, Danh Vo’s Christmas (Rome) 2012 is one of the most arresting. Hanging like a worn patchwork quilt from the ceiling of a nearly empty white gallery in the Guggenheim, it consists of multiple strips of faded brown velvet eerily seared with the dark silhouettes of crucifixes, monstrances, and reliquaries. The strips were reclaimed from the Vatican Museums, where they once served as backdrops for religious objects; it’s the shadow of these objects, left behind after long years of exposure in sunlit hallways, we see here. Vo acquired the discarded backdrops after a 2012 visit to Rome. By weaving the fabric into a monumental tapestry, the artist indicates his ambivalence regarding the church and faith in which he was raised. Signalling the Vatican’s vast artistic holdings and the slow passage of time, the work critiques both the church’s ostentatious wealth and its plodding bureaucracy. Yet at the same time, it transforms the Vatican’s refuse into something silent and beautiful, thereby transcending the same mundanity it condemns.

Such thoughtful ambiguity lies at the heart of Vo’s conceptual art, now the subject of a major mid-career retrospective at the Guggenheim Museum. The exhibit, Danh Vo: Take My Breath Away, on view through May 9, presents more than one hundred works created over a period of fifteen years, unfurling in idiosyncratic, non-chronological order along the spiral ramps of the museum’s rotunda (Vo has even made a few changes to Frank Lloyd Wright’s iconic building, uncovering the ceiling oculus to capture the play of light and commissioning his father, master calligrapher Phung Vo, to engrave a new work in a ground-floor glass window).

Even for admirers of abstraction, the show may come across as a shock. As we wind our way through, we encounter an array of objects, ranging from the playful to the weird to the borderline sacrilegious. Fused fragments of ancient and medieval statuary, swords, chandeliers, washing machines, an old car engine, even Ted Kaczynski’s personal typewriter, appear alongside cardboard beer boxes gilded with American flags, large mirrors etched with obscene quotations from The Exorcist, and ceramic flower pots stamped with 17th-century scenes of torture and dismemberment. We also find six pieces of a medieval statue of St. Joseph, which Vo has sawed up and placed casually about the museum in luggage that meets the carry-on requirements of the low-budget airline EasyJet. Photographs, archival documents, and handwritten texts, mostly copied by Vo’s father, round things out, transforming the Guggenheim into a complex web of associations: the more you go up and down the ramps, the more each object seems charged with meaning, as if they are responding to each other.

The shifting flow of objects reflects the fluidity of Vo’s own lived experience, from which he draws insights on the intertwining of personal narrative and broader historical forces. Vo was four when he and his family fled Vietnam in 1979 as refugees; they were rescued from a wooden boat by a Maersk Company freighter and found asylum in Denmark, where Vo grew up. Since early childhood, then, Vo’s sense of self has revolved around his outsider status, both as a Vietnamese immigrant on the margins of European society and as a gay man who feels unwelcome and ill at ease in the Catholic Church (a childhood photo of Vo, frowning as his sister holds a devotional image of Christ, is on view early in the exhibit). Like a filmmaker splicing sets of images to create new meaning through the process of montage, Vo’s energetic combinations eloquently narrate the otherwise silent stories these objects contain. 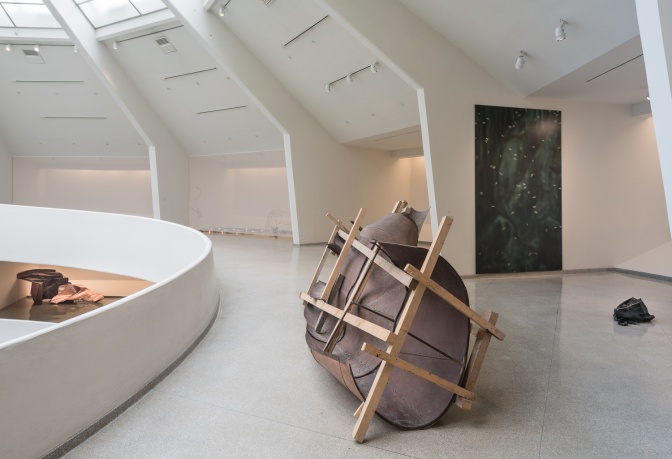 Much of the exhibition centers on Vo’s engagement with American politics and culture, which played key roles in the Vietnam War and therefore exerted an important (though largely negative) effect on Vo’s life. The exhibit’s title, Take My Breath Away, simultaneously evokes eroticism and death as it plays on the title of the hit song (the 1986 Oscar winner featured in the film Top Gun) by the American group Berlin. These twin themes inform the core of Vo’s forceful critique of American militarism and imperialism. One work, a display of fourteen typewritten letters sent during the early 1970s by Henry Kissinger to New York Post theater critic Leonard Lyons, reveals the crass disparity between the statesman’s flirtatious requests for tickets to New York City shows and the atrocities for which he was responsible in Cambodia. Another, a brutally dismantled and savagely dismembered chair once owned by Robert McNamara (and thus present in the White House Cabinet Room during the escalation of the Vietnam War under the Kennedy administration) viscerally captures the violence that can be wrought from distant seats of power. Finally, Vo’s colossal sculpture We the People, a full-scale bronze replica of the Statue of Liberty produced in a Chinese factory whose separated pieces are installed in various locations around the world (parts of Lady Liberty’s ear, robe, and massive hand appear in the Guggenheim show), offers an ironic commentary on both the global reach of American capitalism and the contemporary fragmentation of our founding ideal of freedom.

If Vo is unequivocal in his dissection of American power, he reserves a more complicated, nuanced treatment for Roman Catholicism. As in Christmas (Rome) 2012, Vo’s artistic project is broadly critical of the church, and perhaps understandably: Catholic missionary activity in 19th-century Vietnam not only sought to erase and supplant the local culture, but also actively paved the way for the French military invasion in 1858 that ultimately resulted in the country’s loss of independence. And yet, like the great Italian film director Pier Paolo Pasolini, whose theoretical writings on cinematic montage are incorporated into another work on display, Vo tempers his critique of Catholicism with a sincere admiration for the spiritual phenomenon of belief itself. Even if he cannot find a home in the church, Vo reveals his profound attraction to the dynamic of faith, appropriating the story of Christ and bringing it vividly to life, as in the hybrid performance-and-archival project 2.2.1861, the date of martyrdom of the Catholic saint Théophane Vénard. An ordained priest and member of the Paris Foreign Missions Society, Vénard was beheaded in Tonkin at the age of thirty-one after refusing to apostatize following his conviction for proselytizing. Stumbling upon the relic of Vénard’s skull in a Hanoi church, Vo was fascinated by the story, and followed up by making repeated visits to the Foreign Missions Society archives in Paris, where the rest of Vénard’s physical remains, along with a body of documents related to his martyrdom, are housed. 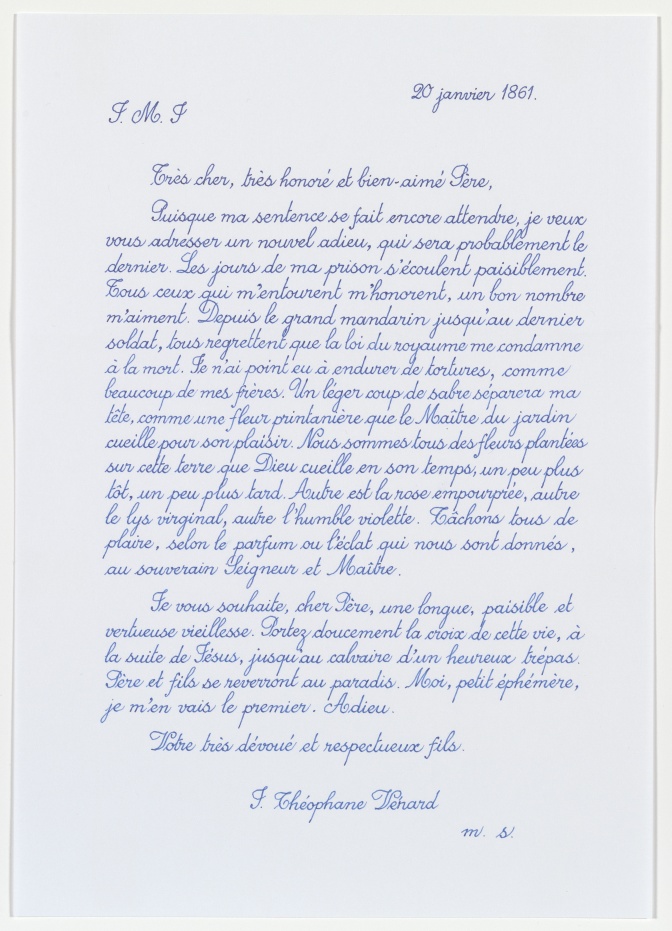 One of Vo’s primary discoveries was a short letter penned by Vénard, sent to his father in France as he awaited execution in a small bamboo cage in Vietnam. With serene acceptance of his gruesome fate, Vénard compares himself to a “spring flower which the Master of the Garden gathers for his pleasure.” The letter inspired Vo to stage a kind of ongoing resurrection for Vénard, commissioning his own father (a believing Catholic with a special devotion to the saint) to produce elegant, handwritten copies of the letter at regular intervals, a practice he will continue until his death (or for as long as he is physically capable). Vo sells the letters, sharing the modest proceeds with his father, or gathers them into an archive (on display in the Guggenheim’s reading room). This continuous process of production and conservation becomes at the same time a meditative act of devotion, as well as a poignant occasion for spiritual communion between father and son.

Much of Vo’s most recent art, especially the works displayed in the upper floors of the exhibit, speaks plaintively of the pain of separation and the sorrow of loss. One in particular provides us with a haunting representation of Christ’s passion, which serves as a fitting conclusion for our visual journey this Lent. Deceptively simple, Log Dog at first appears as a massive heap of dead wood and rusted metal that stretches fifteen feet across the floor. The branches were gathered by Vo himself on the streets outside his home in Mexico City, while the metal “log dogs,” chained hooks used in the logging industry for hauling timber, come from the Pacific Northwest. Upon closer inspection, we find that Vo has also hidden fragments of a 17th-century French crucifix, whose oak limbs blend in seamlessly with the gnarled branches surrounding them. Once we spot the dismembered Christ lying amid the rubble, the whole scene takes on new meaning. The chains, spikes, and faded wood of Log Dog now recall with gut-level intensity the instruments of Christ’s torture, bringing before our eyes the horrifying consequences of his decision to lay down his life for his friends. It’s a personal, profoundly moving religious work, made by an artist who himself has experienced the raw sting of rejection and the lonely anguish of an outsider.

All too often, we tend to think of the Resurrection as the logical consequence of the events of Good Friday. Rarely do we pause and meditate on the tangible, concrete effects of our sin. Vo’s art, on the contrary, cautions us to be wary of the cheap grace that propels our headlong rush toward Easter. Our salvation, after all, was bought at a dear price. If like Vo we take the time to look, we will find the crucified Christ lying in the wreckage of our own lives. Plain admission of this fact, both on our part and the part of our church, would be a welcome step toward the new life that God so lovingly desires for us.