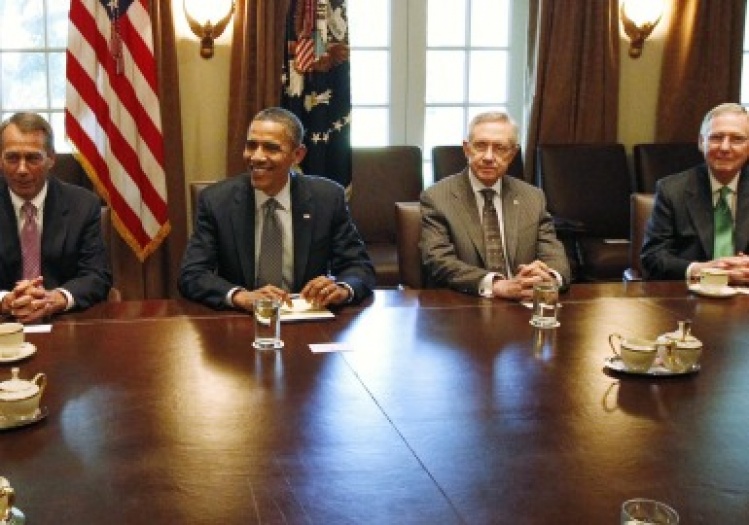 “Blessed are they who expect nothing, for they shall not be disappointed.”

It was the early 20th century socialist Eugene V. Debs who pointed to the utility of this extra Beatitude. You don’t have to be a lefty to appreciate its relevance to our politics after the shutdown disaster.

Cynicism about the political future is a default position with a great deal of evidence behind it. We seem incapable of reaching compromises or even finding ways to differ productively. Even elections don’t seem to settle things.

Against this grain, I suggest that we allow ourselves a margin of hope in the wake of the decisive defeat of the extremists who closed the government down to accomplish absolutely nothing. It is a hope tempered by humility. Giant leaps ahead aren’t in the cards. But some important things changed for the better because of this battle.

It almost certainly ended the GOP’s routine use of threatened catastrophe as a form of leverage. In an interview with National Review’s Robert Costa, Senate Republican Leader Mitch McConnell was direct. “A government shutdown is off the table,” he said. “We’re not going to do it.”

True, McConnell doesn’t speak for the conservative fringe. But the costs of this escapade were so high that Republicans know how much they’d be hurt in the 2014 elections if they tried a shutdown again. As for not raising the debt ceiling, House Speaker John Boehner blinked before throwing the nation into the abyss, and thank God he did. Because it’s now clear that the debt-ceiling weapon is so toxic as to be unusable, Congress might rid us of this relic of World War I finances.

With contrived crises off the table, there is the possibility of normal governance. The Democrats’ overlooked victory (other than avoiding an economic meltdown) is the instruction that the House and Senate, having passed two very different budgets, sit down to work things out.

Outside groups: Please stop touting a “grand bargain.” There can be no grand bargain right now because Republicans are not inclined to agree to any new revenues and Democrats rightly won’t concede anything on the big retirement programs unless revenues are on the table. Pushing for a grand bargain now will only invite disappointment. And those who seek one even if it contains no new revenues will be revealing that their true priority is slashing Social Security and Medicare rather than achieving sustainable fiscal balance.

But Republicans and Democrats could come together around what we might call confidence building measures, a Cold War term sadly appropriate to the moment.

The “sequester” enacted in 2011 includes cuts that are unpopular among both Republicans and Democrats. While many conservatives want to preserve the low level of government spending that the earlier budget deal requires, a fair share don’t like putting infrastructure improvements on hold indefinitely and fear the cutbacks in the military that are coming. Democrats won’t restore military spending without offsetting restorations to domestic programs that have already been cut too much. There is room for trading -- and an opportunity to undo at least some of the damage these deep cuts are causing the economy.

Immigration reform seems a longshot right now, but the politics could change. Many conservatives claim President Obama is promoting it only to boost the Democratic vote among Latinos in 2014. This has it exactly backwards. By putting more political pressure on Republicans, immigration reform’s supporters will make it easier for the GOP to do what so many of its leaders know it must do eventually if it’s to avoid writing off Latino and Asian voters for a generation.

But the most hopeful sign of all is that the shutdown reminded Americans that our country depends on an active, well-functioning government. This has emboldened Democrats to challenge the tea party’s sweeping anti-government bromides with an unapologetic case for the public sector.

“We hear all the time about how government is the problem,” Obama said when he welcomed the end of the crisis. “Well, it turns out we rely on it in a whole lot of ways. ... So let’s work together to make government work better, instead of treating it like an enemy or purposely making it work worse.”

Which brings us back to Debs: Perhaps our standards are too low if all we expect is that our politicians, whose job is to make government work, simply start doing what they are paid to do. But that alone, after all we’ve been through, would be a great step forward. It’s something to hope for.