But Was the Debate Too Polite?
By Michael W. Higgins
Bishops
Death and Dying
Ecumenism
End-of-life Issues
Ethics
Secularism and Modernity
Social Justice 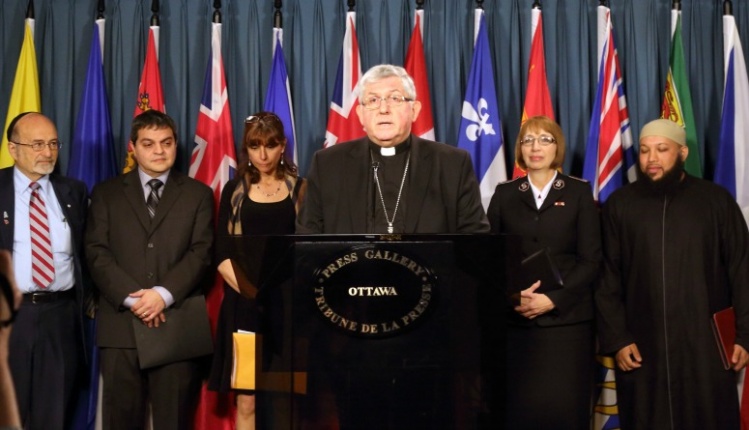 Tout est fini! It is finished.

After months of debate, delay, and political maneuvering between the House of Commons and the Senate, the Canadian government on June 17, 2016, received royal assent for Bill C-14, its medical-assistance-in-dying legislation. Canada thus joins Belgium, the Netherlands, and the states of Oregon, Washington, Montana, and Vermont in approving legal procedures for physician-assisted dying.

Though the matter had been debated for some twenty years, it was the 2015 Supreme Court decision Regina v. Canada that struck down Canada’s long-standing ban on physician-assisted death. The justices determined that Canadian law was in violation of the Charter of Rights and Freedoms and therefore unconstitutional; in effect, the legitimate right of the individual to discern the timing and manner of his or her death in the light of unendurable, prolonged suffering on the cusp of a natural death, had been compromised. The court also instructed parliament to enact new legislation. When the deadline passed with no new legislation proposed (a change of government interrupted the process), the Supreme Court granted the new administration’s request for an extension.

An all-parliamentary committee was created to recommend a new law, and when it submitted its report to the House of Commons in February, 2016, the real debate began. Unhappy with the extraordinary latitude of the recommendations brought forward by the committee—which included provisions for teenage consent to assisted dying, for depressed people no longer disposed to continue living having the right to elect death in spite of no threat of foreseeable death by natural causes, and more—the House made numerous adjustments that resulted in a tightening of the proposed law and submitted the bill to the Red Chamber (the Senate) an unelected body charged with the mandate to provide “sober second thought.”

Things didn’t quite proceed that way. New Liberal Prime Minister Justin Trudeau, faced with a scandal-plagued body generally dismissed as a repository for party hacks, politicos, and bagmen, had in his campaign of reform “de-partisaned” the Liberal members of the Senate and appointed numerous Independents with no obligation to rally around the party whip. The result was that he could no longer control the body that has to approve House bills so they can become law. It was a problem entirely of his own making. The Independents he appointed proved as radical as the members of the original all-parliamentary committee and balked at the “conservative” nature of the House bill.

The scene was set for a battle royal. But in fact the Senate finished its debate in just a few days, evaluating various amendments covering a wide range of issues and whittling these down to seven before returning the bill to the House. The House incorporated all but one of the amendments—the controversial recommendation that the term “reasonably foreseeable” be deleted in order to allow those with a terminal illness of indeterminate length, or indeed those facing unbearable suffering with no surcease, to choose doctor-assisted suicide. And thus Bill C-14 became the law of the land.

AMERICANS DELIGHT IN contrasting their approach to life, community, civility, and manners to that of their northern neighbors. In April of this year, The New Yorker’s Calvin Trillin whimsically constructed a scenario in which he seeks asylum in Canada. He is forced to explain to a Canadian immigration official why he had settled on this description of the difference between Americans and Canadians in keeping political debate participants to their allotted time: “Under the American method, two large men approach the speaker, throw him to the ground, kick and pummel him, pull out 9-millimetre Glock automatics, and fill him full of lead. Under the Canadian method, I clear my throat and point to my watch.”

There was a lot of throat-clearing during the progression of Bill C-14. There were also impatient exchanges, passion, forthrightness, and dismay. But with very few exceptions, the debate was considered and civilized. Rather Canadian, alas, and in more ways than one.

Benign euphemisms were deployed regularly in an effort to make the legislation more palatable to a nervous public. But Canada’s national newspaper The Globe and Mail was refreshingly blunt in its editorial position prior to the bill’s passage. It observed that “once the new law is adopted, we will be a country whose legislation allows the state to kill its citizens, pure and simple. People often warn against slippery slopes, but this is no slope. This is a precipice from which there is no return.”

To be clear, The Globe and Mail was not opposed to the legislation per se. It recognized that Parliament was responding to polls indicating that the public was in favor of some form of “euthanasia” (although that word was stricken from the vocabulary of the more aggressive “dying with dignity” lobby groups), that a national consensus needed to be achieved, rigorous constraints put in place, and critics persuaded that doctor-induced death was an act of mercy.

Chief among the critics were various national bodies of religious leaders: a Salvation Army commissioner, the Evangelical Fellowship of Canada, the Canadian Council of Imams, the Centre for Israel and Jewish Affairs, and—the largest and most influential—the Canadian Conference of Catholic Bishops (CCCB).

The CCCB pulled no punches. Its rhetoric in opposing the bill was redolent of the culture-war discourse typical of many U.S. Catholic episcopal utterances: “From the Catholic perspective, no amendments could legitimate the inherent evil in the premises behind the proposed legislation;” “the legislation is itself intrinsically and gravely immoral;” “it is an affront to human dignity, an erosion of human solidarity, and a danger to all vulnerable persons.”

Initially, the bishops opted for the pummel approach. And they had strong allies, including the Canadian Catholic Bioethics Institute and the well-known ethicist Margaret Somerville, founding director of the Centre for Medicine, Ethics, and Law at McGill University. Somerville argued that “although Bill C-14 unavoidably damages the value of respect for life and puts vulnerable Canadians at risk, its goals include, as its preamble recognizes, maintaining respect for human life at both individual and societal levels and the protection of vulnerable people. Achieving those two goals demands another goal to be explicit in the preamble: not allowing medically assisted suicide to become the norm for how we die.”

When it became clear that Parliament was not imposing its will on the people but actually responding to a public need for clarification and direction; that continued denunciations accomplished nothing; that a biblical anthropology that speaks of life in terms of gift no longer enjoys general currency among the Canadian citizenry, the Canadian bishops chose a different tack, with different rhetoric.

Noël Simard, the brilliant and amiable bioethicist and bishop of Valleyfield, Quebec, spoke with other interfaith representatives to underscore the need for enhanced palliative care and adequately resourced hospice services, a position perfectly consonant with that of the Canadian Society of Palliative Care Physicians. Similarly, the Canadian Medical Association and the Canadian Association of Psychiatrists were especially keen on ensuring that priority be given to delimiting the range of choice for those opting for physician-assisted dying. All these bodies remain committed to restricting expansion, enhancing opportunities for controlled pain practice, and guaranteeing respect for the role of personal conscience among health-care professionals.

One of the earliest interventions to carry weight with Canadian society at large was made by L’Arche’s Jean Vanier and Hollee Card on March 1, 2016.  They advanced a compelling and well-reasoned argument that “with this right—the right to die—we must take care not to obscure or forget the innate dignity of those who are most vulnerable or reinforce an ideal that only an independent life has purpose and value…. It is part of our humanity that we provide care to one another, and also that we receive care from one another. In this way, we should all be able to meet death with dignity—no matter our condition or our needs.”

Vanier and Card compassionately reasoned that assisted dying must never eclipse the right to a purposeful life for any of those with physical and mental vulnerabilities; people who rely on the care of others must never be coerced into opting for an early death to spare being a burden for their families; palliative care must not be sacrificed on the altar of economic expedience.

As ethicist and pediatrician Sister Nuala Kenny noted in Health Decisions and Care at the End of Life: A Catholic Perspective, a booklet she wrote during the debate, physician-assisted death is part of the “medicalization of death and human suffering,” an all-encompassing conviction that pervades our society and conditions us to the notion that there is a “quick fix for every ill and every kind of human distress.” Out of this, she continued, “assisted death would certainly not be confined to end-of-life care or terminal illness.” Such a dark and somber warning is at the heart of the deepest reservations over the direction of Canadian society, reservations articulated by the Canadian bishops, political commentators of the right and left, numberless Catholics, and the majority of the medical community.

The conflicts surrounding the passage of Bill C-14 may have been subdued by comparison with other political jurisdictions throughout the world, and the Canadian predilection for polite exchanges may have held firm even in debate over so important an issue. But there can be no gainsaying the collective step taken by the nation, which diminishes us all. Autonomy and human rights have won a Pyrrhic victory, and the implications for a caring and compassionate society are grievous.