I should start by admitting that a few years ago I fell in love with Anne Lamott, and it was hard not to. Admittedly, this was from something of a distance, during a reading she gave at a local bookstore. Slightly disheveled, just a little spacey but smart and dead-on funny, she seemed like she’d be a great pal and next-door neighbor, someone who might occasionally have words of wisdom and would always be good company.

Enough of that quirky, likable persona comes through in Lamott’s writing to have given her quite a following, especially since her clear if unconventional Christian faith has also landed her a spot in the inspirational reading section of your local bookstore (at least in blue states, but more on that later). Grace (Eventually) is the third collection of Lamott’s “thoughts on faith,” some of which originally appeared in her irregular column in the online magazine Salon. How does Lamott, the charming writer and teacher of writing, stack up as a Christian apologist? Since I generally enjoyed her first two volumes of faith essays (Traveling Mercies and Plan B), it hurts to say that in this one, the “thoughts,” if not the faith, left me disappointed.

To start, however, we have to agree that her conversion story is a California edition of the real thing: once a drug-using, hard-drinking, loose-living 1970s hippie, Lamott found Jesus during her battle to get sober. When she talks about religious experience, and the crooked paths that God pushes us down, Lamott’s irreverence and clarity are right on. At her best, she tells us things we need to hear all the time in new and unusual words: that striving after the vain things of this life is futile; that God’s grace is subtle and not obvious; that church is a good place to discipline ourselves into loving some other very imperfect people. We could certainly use a few more unpredictable Christian essayists whose path to faith hasn’t turned them into dogma groupies or moral scolds.

At her best, Lamott can turn a great phrase—she is, after all, the author of one of the best and most entertaining books on writing ever, Bird by Bird. Describing the 1970s version of herself, multiple sizes larger and dressed in eccentric colors, she says she was “a Gypsy wagon with an Afro.” That’s good, you have to admit. But sometimes a strain of cutesiness edges in—surely phrases like “just a smidge” should not appear in print often—and most essays in this volume seem to end predictably with the equivalent of a freeze-frame fadeout. In a one-off essay, this could be very effective, but when it is repeated over and over in a collection the trick seems more like, well, a trick. And the casual Bush-bashing, while it warmed my partisan blue-state heart, also limits her readership: no one but out-there Democrats need apply.

What eventually put me off Grace (Eventually) was not the writing or the faith but the thinking, and the unexpected, even explicit edge of intolerance. Lamott’s Marin County openness and unconventionality extend only so far, it seems, and opposing points of view don’t even need to be carefully described, much less wrestled with. For example, in one essay that received a lot of blog attention after it originally appeared in the Los Angeles Times, Lamott describes her active role in assisting a neighbor with cancer to commit suicide. She obtained prescription pills and mixed them with applesauce “in a tiny Asian bowl” to help him escape his plight after he had realized that “I won’t be me for much longer.” She has no doubt that what she did was right—all those people telling her not to “play God” were, she said, mostly atheists, and clearly didn’t understand the demands of compassion.

There are few actual “thoughts on faith” here. Lamott’s theological reflection on euthanasia is limited to an observation that “you’re going to be leaving anyway, so who says it isn’t okay to take an incomplete in the course?” Such breeziness, often so enjoyable in the rest of Lamott’s work, seems too glib a way to pass over the faith and thinking of other Christians who think the gospel suggests something more challenging on the issue. In the end, it turns out that Lamott, too, is a bit of a scold, even if her scolding has a more organic flavor than that of some Christians she maligns for having joined the forces of darkness and sometimes even the Republican Party.

Her essay “The Born” describes a Washington panel discussion about Christians in politics that provoked her to a very public and unexpected rant in favor of abortion rights and the women “whose lives had been righted and redeemed by Roe v. Wade.” Arguments to the contrary, she writes, are “patriarchal sentimentality about minuscule zygotes,” absurd on the face of it when so many born women and children need help and support. When the audience fails to jump on this bandwagon, Lamott notes that “not until the reception afterwards did I realize part of my problem—no one had told me that the crowd was made up largely of Catholics.” (So I guess we won’t be pals after all.) The freeze-frame ending on this essay, with Lamott bonding over M&M’s with a woman in the audience who praised her courage, succeeds in evading the question of whether other Christians at the gathering had a point of view that might be addressed with anything other than a jerk of the knee.

We need more Anne Lamotts. She talks about Jesus without embarrassment, she loves her local church and tries to love all the people in it, and she knows firsthand about the demons that afflict us. But especially in her latest book, the rest of the Christian church outside her comfortable home base seems to be alien territory. Her insularity too often turns into contempt. I hope she writes more “thoughts on faith,” and that they end up being about more than just her faith. And I hope she decides to spend more time with some of the billion other Christians whose thoughts can be so different from her own. 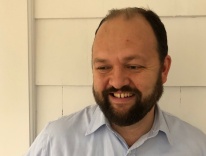