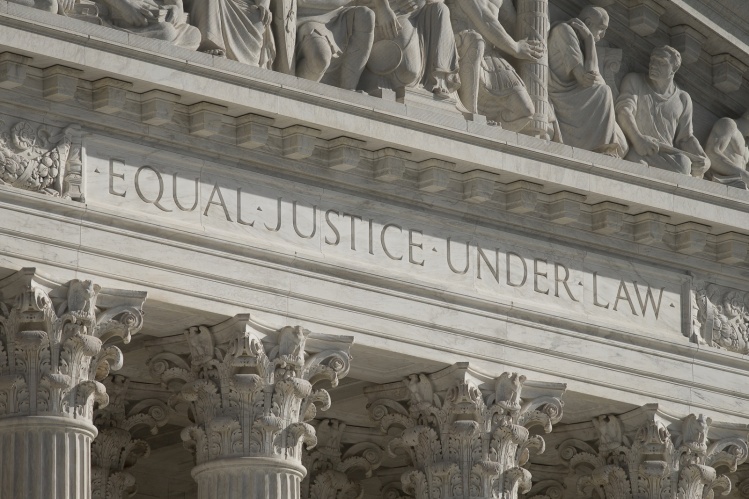 This piece was originally published on August 13, 1976

The fate of over 600 death-row prisoners in 30 states now hangs in precarious balance by virtue of the U.S. Supreme Court's July 2 companion decisions concerning capital punishment. The Court made clear what had been in considerable legal question since its last major pronouncement on the subject in 1972. Then, in the case of Furman v. Georgia, a bare majority of five Justices found all existing state capital punishment laws unconstitutional because of the arbitrary and "freakish" manner in which the death penalty was imposed. That decision went only to the distribution of death as punishment, and did not deal with the nature of the practice itself.

In response to Furman, 35 states and the federal government passed various capital punishment laws designed to eliminate the capricious selection processes which the Court found unconstitutional under the Eighth Amendment's ban on cruel and unusual punishment. Essentially, these statutes removed from judge and jury the discretionary choice as to which of those convicted 0f certain crimes would die, and required the sentence of death upon conviction for specified offenses. But that, as Justice Stewart's opinion this month recognized, merely pushed discretion back a step or two on the chain of events we call criminal justice. Knowing the inevitable result of their returning a guilty verdict, many juries undoubtedly found ways of acquitting an offender they might otherwise have convicted or of finding him guilty only as to a lesser charge.

One of the main criteria which the Court relied on in finding arbitrary the sentencing pattern in Furman was the disproportionate number of minority-group members who were meeting the executioner. Interestingly, the statistics show that in the four years since that decision, the so-called "mandatory" laws have yielded an even more disproportionate number of minority citizens sentenced to die. By its own earlier narrow standard, the Court could thus reasonably have been expected to finally outlaw capital punishment.

Instead, it has merely banned mandatory death sentences for every murder convict, and openly returned the decision, on a case-by-case basis, to judges and juries who must now operate within statutory sentencing guidelines. These statutes must provide judges and juries with adequate information and guidance for determining whether the sentence is appropriate in a particular case; those deciding will have to take account of mitigating as well as aggravating circumstances surrounding the murder's commission. What all this in practice means is that capital punishment is constitutionally available, and that even slightly-modified versions of the "mandatory" laws will probably be acceptable for its imposition.

All of this relates to procedure, not substance. There had been good reason to hope during the past four years that the Court would eventually find the death penalty per se in contravention of the Eighth Amendment, not to mention the moral sensibilities of a large segment of the American people. The Court has, for the foreseeable future at least, dispelled such hopes. It has left instead a host of legal problems to be sorted out in that atmosphere of moral ambiguity which characterizes most of the Court's recent determinations with regard to matters of life and death.

Unless and until a future Court majority can bring itself to declare death an inherently cruel and unusual punishment, the practice of state-sanctioned killing will continue in this country. As long as capital punishment remains a constitutionally permissible option, the 'majority of states will devise ways of employing it which pass muster under the new guidelines. All other questions concerning the issue, no matter what their relative importance, are subordinate to the fundamental moral and philosophical determination. Thus, it is to that aspect of the controversy that I would like now to turn.

During oral argument on the consolidated appeals last spring, the Justices reportedly evidenced lively interest in the death penalty's alleged effectiveness as a deterrent to violent crimes, particularly murder. The academic arguments made in this connection have long since passed the point of wearisome predictability and inconclusiveness. Competing views rooted in differing political and social values come cloaked in the trappings of intellectual "objectivity," as though even if there were a definitive empirical answer on the deterrent value of death, that alone would end discussion.

In fact, an ethically principled resolution of the death penalty controversy can never be based solely or primarily on considerations of deterrence. That penal theory asks only: How can we punish this offender so as to most effectively inhibit potential offenders; how can we use this offender's case for purposes of example? The formulation itself suggests the inherent risk, borne out in practice, of discounting an individual's fights now in favor of some projected collective agenda. But deterrence-minded advocates of the death penalty simply assume the morality of such a scheme, and quickly proceed to their statistical calculations. They can do so only because their prime goal is general utility, not individual justice.

In their majority opinion, the Justices claim to have set little store by the deterrence argument argument in reaching their result. They rested their philosophical case, rather, on the penal rationale known as retribution. But in so doing, they fixed upon one, but by no means the only or most persuasive, implication of that theory for capital punishment. Retribution alone among the justifications for criminal punishment is concerned first and foremost with doing justice in the individual case. It concerns itself with meting out punishment according to the offender's just deserts, measured with reference to the past: retribution shapes his punishment according to what the offender actually did, not according to what he, or others, might possibly do in the future. This approach by no means excludes the additional major penal goals of deterrence and rehabilitation, so long as they are not pursued at the expense of certain human rights and concepts of justice which the Constitution guarantees. Of these, none could be more fundamental than the right to life.

Society clearly has the right (indeed, obligation) to fairly punish a criminal who deserves it. But the correlative questions are no less important than the basic proposition" Which punishments are moral, just, and constitutional? The argument here is not that a particular murderer might not justly deserve to die. Rather, the question must be: Can our society impose such a punishment without thereby corroding the very bases of human dignity and respect for life which it is part purpose of a retributivist punishment scheme to preserve? Is the society's general duty to protect human life more compelling than any obligation it might have to administer the otherwise just punishment of death? Still more basic: Can a punishment which takes life be truly just?

I contend that one may consistently uphold the state's general right to punish insociety's behalf, and at the same time argue that the state should not have the right to punish by death. Many modern retributivists make a similar argument. They stress that the more important component of a particular punishment is its condemnatory function, its symbolic underscoring of society's serious disapproval of certain conduct. Less important is the actual penalty part of the sentence; it should certainly be commensurate with, but need not be exactly proportionate to, the gravity of the offense. They advocate, in short, a return to punishment based on the concept of just deserts, without a rigidly mechanical adherence to the biblical lex talionis ("an eye for an eye, a tooth for a tooth").

Paradoxical though it might seem to those who automatieally associate retribution with the harshest sentences imaginable, it is the only theory of punishment which has a coherent, principled basis from which to oppose their imposition. Two recent retributivistly-oriented proposals to make punishments fair and certain have recommended a generally shorter sentencing scale than that currently prescribed (though rarely enforced) in most American jurisdictions. The key difference is that a sentencing-and-punishment policy grounded on retribution would eliminate plea-bargaining, and, generally, probation and parole. Simply put, a sentence imposed would be a sentence served. Significantly, neither of these proposals called for capital punishment as the appropriate response to murder, thereby taking a position well within the spirit and logic of the retributivist penal theory. The Court, unfortunately, has just chosen a different path.

The main concern in discussion of the death penalty is the value we as a society choose to assign human life, even, and maybe especially, the life of someone found guilty of taking another's life. I say "especially," because the temptation to repay in kind is never stronger, the test of our commitment to preserve life never greater than in this situation. If we collectively allow the state to kill a convicted murderer in our name, it can be on one morally justifiable basis only: because we honestly and strongly believe that justice requires it and that justice will be satisfied by no lesser punishment, however severe.

As we proceed to resolve the myriad of legal complexities left in the wake of the Court's opinion, let us, our legislatures, and our courts no longer hide in the mists of unresolvable, and secondary, debate about deterrence. Let's face the moral issue up-front. If we agree that this convict's just deserts and society's legitimate right to punish him can find mutual fulfillment only in death, then the Supreme Court has not left the door open in vain. But I think we can and must do better than that in devising appropriately severe and certain punishment for this society's murderers, punishment that does not imitate their cheapening of human life.