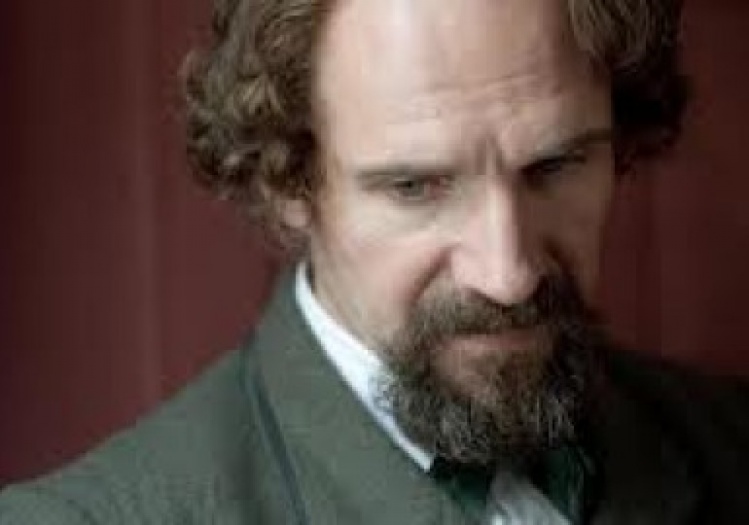 In the paperback copy of Great Expectations I read as a boy, the introduction informed me that Ellen “Nelly” Ternan was a teenaged actress whose affair with the much older Charles Dickens broke up the author’s marriage, and that Nelly’s taunting wiles made her the probable prototype for the novel’s icy Estella. Here were the movie makings for a Victorian version of The Blue Angel!

But Abi Morgan’s screenplay for Ralph Fiennes’s The Invisible Woman, drawn from a book of the same title by Claire Tomalin, treats both Dickens and Ternan with tenderness and tact. Dickens comes across not as lecherous or manipulative, but simply as a bottled-up man yearning to be embraced by a kindred spirit, while Ellen, uncertain of her place in the world, is both dazzled by the celebrity’s attentions and understandably resentful about having to keep herself “invisible” to preserve the novelist’s status as supreme champion of Victorian family life. All the ancillary characters are also treated sympathetically. Ternan’s mother tacitly encourages the liaison, but her concern for her daughter’s material welfare is so keenly projected, by both the script and Kristin Scott Thomas’s excellent performance, that we can pardon her. Dickens’s fellow author and right-hand man, Wilkie Collins, approves of the affair only because he regards it as a blow against societal hypocrisy. And Joanna Scanlan plays Mrs. Dickens with such quiet intelligence that we can’t credit her husband’s dismissive judgment that “she understands nothing, she feels nothing.”

Such gentleness and tact are welcome, but one can have too much of a good thing. Dramatic restraint can drift into mere gentility, as it threatens to do here. Dickens was not known as “the Inimitable” for nothing, and the fact that he himself invented the nickname indicates the size of the man’s ego. In fact, Fiennes’s Dickens is supremely imitable; he might be any nice, furtive gentleman yearning for the forbidden. One gets little sense of the daemonic energy behind his genius, an energy sometimes channeled into acts of cruelty. Morgan’s script tiptoes around Dickens’s less forgivable deeds. At one point, a bracelet Dickens bought for Ellen was accidentally delivered to his wife instead. The author ordered Mrs. Dickens to redeliver the gift to his mistress in person! We see the encounter between the wife and mistress, but not Dickens dispatching his spouse. The cruelty of the episode is soft-pedaled. Similarly, we see Dickens building a partition in the bedroom to shut himself off from his wife. Fair enough. But we don’t get to see the great man later turning his wife out of their house, setting her up in a separate residence (with a pension, to be sure), and virtually commanding the children to choose between their parents. I’m not saying a biopic has to slavishly follow the historical record—in that case, I would have to despise Amadeus, a movie I admire—but if filmmakers cherry-pick facts to make their protagonists either agreeable or egregious, they aren’t likely to wind up with a compelling drama.

The problem is compounded by both the direction and the lead performances. In the first third of the film, before the affair is consummated, Fiennes and Felicity Jones nicely convey semi-buried feelings with sidelong glances, catches in the throat, and all the other nuances of frustrated love. But once the affair is underway, the actors fail to put more kindling on the fire. Fiennes remains gentlemanly and Jones never gets beyond quiet seething.

I don’t fault Fiennes for the film’s lack of Dickensian bustle and comedy, for the people in the author’s real life didn’t live in the pages of a Dickens novel. And Fiennes does show a flair for finding suitably melancholy landscapes to serve as backdrops for melancholy emotions. But the soundtrack is so hushed, the interiors so uniformly shadowy, the scenes so tightly composed that the movie often teeters on the brink of boredom, though it never quite falls over. Whether or not the Ternan affair actually inspired Great Expectations, I wish that more of that great novel’s reverberant anguish had roiled the smoothness of The Invisible Woman.

THERE HAVE BEEN PLENTY of films about recently divorced, middle-aged women finding a new lease on life, but the heroine of the Chilean film Gloria fiercely maintains an old lease. Gloria, played by Paulina García in a justly acclaimed performance, has been divorced for more than a decade, and her two children, now in their thirties, have long since made independent lives apart from her—a little too apart for her emotional comfort. Gloria is a woman who depends on her senses to make her feel truly alive: she enjoys food and drink, sings along with the car radio when it plays love songs, takes laugh therapy and yoga classes, cruises bars both for dancing and occasional sex. In her review for the Village Voice, Stephanie Zacharek sums it up nicely: “Gloria doesn’t need a guy; she just wants one.” Finding a promising long-term lover in the recently divorced Rodolfo, who owns an amusement park, she’s delighted to try out his tame version of bungee jumping and paint-ball marksmanship. Given her intense physicality, it’s a bitter irony when Gloria discovers she may have glaucoma, but she doesn’t panic. She applies her eye drops and awaits what fate will bring her.

The love affair with Rodolfo turns out to be a sad study of contrasting natures. Despite his surface courtliness and romantic ardor (he reads Neruda’s love poems to Gloria), Rodolfo is stuck in his unhappy past. His manipulative daughters keep him on a tight leash and he runs to them whenever they tug at it, not hesitating to leave Gloria in the lurch, sometimes in ways that acutely embarrass her.

Even in the way they smile, the two lead actors make it clear that the characters they play are not on the same wavelength. Paulina García’s smiles are sensual and avid, an invitation to one and all to come and astonish her. But Sergio Hernández, who plays Rodolfo, usually smiles as if he felt a panic attack arriving and would appreciate a little pity to keep it at bay. Rodolfo is facing backwards, Gloria straight ahead. Trouble looms.

The director, Sebastián Lelio, who also wrote the screenplay, gets his actors to supply each scene with such an abundance of tiny, expressive gestures and inflections that his camera can just catch crucial moments on the fly as it pans over a dinner table or zooms in on a dance floor. That makes him the right director for a story about a woman whose way of surviving is to live on the fly, to rise on every wave of feeling and let it take her where it will.

The Films of Carl Dreyer