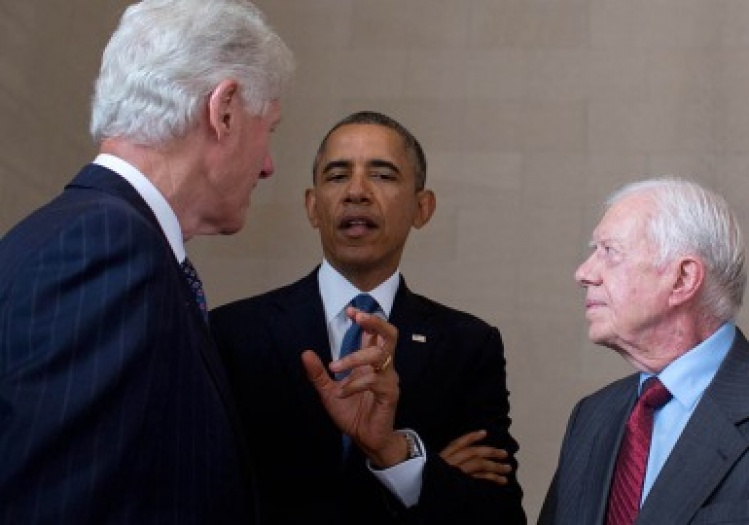 In Georgia, Democrat Michelle Nunn is giving Republicans a real scare in a Senate race the GOP thought it had put away. Some of her new momentum comes from a sustained attack on David Perdue, her businessman foe, for his work shipping American jobs overseas.

One ad includes a quotation from Perdue about his outsourcing past: “Defend it? I’m proud of it.” The tagline: “David Perdue, he’s not for you.”

Meanwhile in Kentucky, Alison Lundergan Grimes, trailing in the polls against Senate Republican leader Mitch McConnell, has refused to say whether she voted for President Obama. But when Hillary Clinton came to the state to campaign for her last week, Grimes was proud to call herself “a Clinton Democrat.”

This is no accident: In Kentucky’s 2008 presidential primary, Clinton defeated Obama 65 percent to 30 percent. Coal country in Eastern Kentucky is a battleground in the Senate contest, and Clinton swept the region six years ago. In Magoffin County, Clinton received 93 percent of the vote.

Finally, consider a speech Clinton’s husband made in New Hampshire last Thursday, campaigning on behalf of Sen. Jeanne Shaheen and the rest of the Democratic ticket. “I feel like an old racehorse in a stable,” former President Bill Clinton told a crowd of about twelve-hundred at a fundraiser to appreciative laughter, “and people just take me out and put me on the track and slap me on the rear to see if I can run around one more time.”

The elections in Georgia and Kentucky are different in important ways, but one lesson from both is that Democrats can’t win without a sufficient share of the white working-class vote. Nunn, on offense, and Grimes, on defense, are both trying to secure ballots from the sorts of voters who were once central to the Democratic coalition.

And Bill Clinton’s comments reflected what his party is up against: Republicans have been quite effective at turning the anger that working-class whites feel about being left behind in the new economy against liberals, Democrats, and especially the president. The Democrats’ worries were nicely captured in a headline on Matthew Cooper’s recent Newsweek article: “Why Working-Class White Men Make Democrats Nervous.”

There is no reason to be dainty or evasive in saying that racism and racial resentment are part of the equation, and it’s not just that Obama is our first African-American president. Racial politics has been helping Republicans since the 1960s when much of the white South realigned toward the GOP in reaction to the Democrats’ embrace of civil rights.

This year, it’s not hard to see coded messages in Republican advertisements blanketing the airwaves tying the Islamic State and even Ebola fears to immigration and border security, or ads in gubernatorial campaigns in Maine and Massachusetts about welfare.

Yet race is not the only thing going on. Andrew Levison, the author of The White Working Class Today, says it’s important to distinguish between racial feelings today and those of a half-century ago. “It’s not 1950s racism,” he told me. “It’s more a sense of aggrievement -- that Democrats care about other groups but not about the white working class.”

Complicating matters, but also giving Democrats hope, is the fact that younger members of the white working class are more culturally liberal than their elders. They are also more open to a stronger government role in the economy, as Ruy Teixeira and John Halpin of the Center for American Progress have shown.

Perdue’s problems on outsourcing, like Mitt Romney’s 2012 troubles related to his own business background, reveal the major soft spot in the GOP’s white working-class armor: that many blue-collar Americans combine a mistrust of Democrats with a deep skepticism about the corporate world. Anna Greenberg, a Democratic pollster, says this points the way toward arguments that progressives need to make in the future.

“We have to expose the unholy alliance between money and politics,” she says. “Concern about inequality is unifying, it’s cross-partisan, and it’s not ideological.”

This will play some this year but may loom larger in 2016. For now, vulnerable Democrats seem eager to have the old racehorse on the track, and Arkansas and Louisiana were the next stops on Bill Clinton’s schedule. He’s trying to bring home voters who once saw his party as the working man’s best friend. 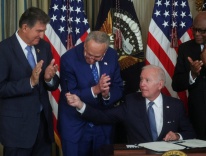