‘The Vampire: A New History’
By Regina Munch
Books
Secularism and Modernity 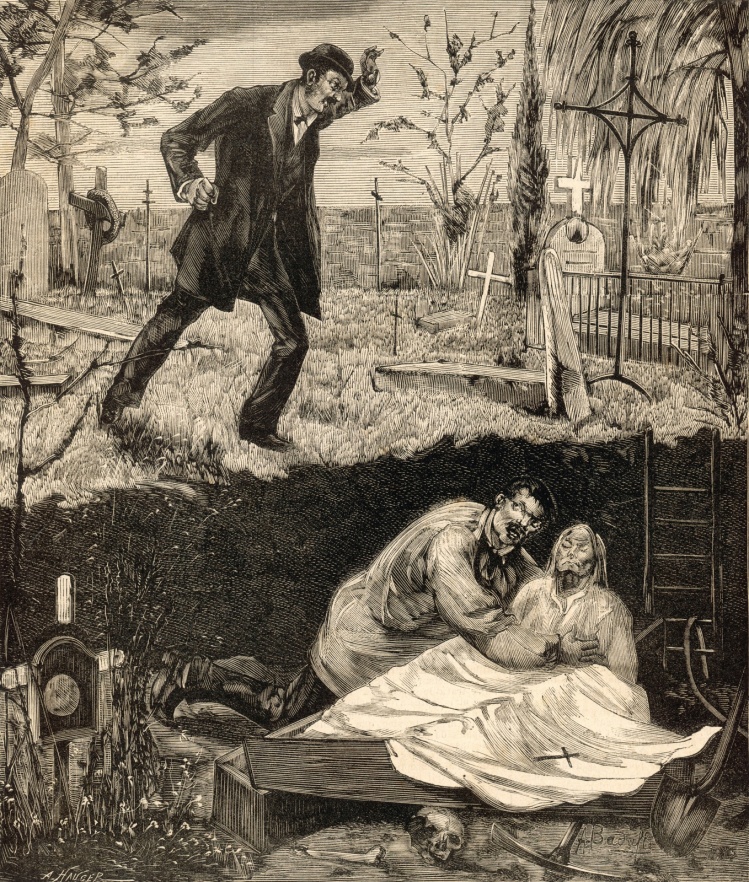 Right from the start, a recent long-anticipated trip to Romania delivered on its promise. On the shuttle from the airport into the heart of Bucharest the driver asked if we had ever visited before. When I told him no, his mood turned grave. “We have a beautiful country,” he said. “But it is not safe to go out at night, especially for a young woman.” When I asked why, he hit the brakes, turned around slowly, and smiled. “You must be careful of the vampires.”

It was just what I’d been hoping for. A huge fan of Dracula, I’d always wanted to see the place that had inspired Bram Stoker’s classic tale, and to get a sense of how its citizens feel about clueless foreigners associating their entire country with nocturnal bloodsuckers and Vlad the Impaler. They certainly seem willing to cash in on it, judging from the tourism industry’s marketing and advertising. But they also revel in it, as evidenced by my grinning shuttle driver.

Romanians are hardly the first people to use the myth of the vampire to establish an identity or advance an agenda, as Nick Groom makes clear in his book The Vampire: A New History. Far from a Freudian representation of sexual desire, an inelegant metaphor for colonialism, or merely a played-out trope, the vampire, according to Groom, is something more layered and complex. “Vampires came into being when Enlightenment rationality encountered East European folklore,” he writes, “an encounter that attempted to make sense of them through empirical reasoning and that, by treating them as credible, gave them reality.” Various folklore traditions make whispering mention of mysterious hybrid ghosts, zombies, werewolves, and demons, many of which suck blood. Only after members of the European elite began to investigate these entities using the science of the day did they become what we know as vampires. Thus, “the vampire is a specific phenomenon that dates from a precise period in a certain place, and which consequently has recognizable manifestations and qualities—particularly concerning blood, science, society, and culture.”

Groom divides his book into two sections—delightfully titled “Circulating” and “Coagulating”—to demonstrate the flow of ideas about disease, demonology, and politics in the seventeenth and eighteenth centuries, which congeal in the nineteenth and twentieth centuries into the Gothic literary figure—epitomized by Stoker’s Dracula—that we’re familiar with today. He writes that although most histories of vampire mythology begin in the Victorian era, the Gothic monster can be traced back to the folkloric milieu of the previous two centuries. From Eastern Europe came tales of bloodsucking creatures that stalked the living, tales that through the 1600s and 1700s spread across the continent. They shared many of the same elements: the vampire comes into being through the reanimation of a corpse; it can influence the weather and certain animals; it preys on loved ones, strangling and sucking the victim’s blood, often from the chest; it can be killed with a stake or by decapitation. Localized versions might include more specific details, such as the unearthing and opening of a suspected vampire’s coffin to find the corpse floating in fresh blood and gore. Sometimes it had partially eaten itself and its clothes. In other versions, one could protect oneself by drinking blood from a vampire’s head, eating the dirt from its grave, receiving Holy Communion, or making the sign of the cross.

The corporeality of the vampire—as opposed to the ephemerality of a ghost, for example—lent itself well to “investigation” via the latest medical and forensic methodologies. William Harvey’s discovery of circulation, Christopher Wren’s development of hypodermic injections, and fears of contagious disease were changing the way the body was understood, and when European empires consolidated power over Eastern Europe, they deployed new techniques to make sense of what they were hearing about. It was only in such investigations, Groom writes, that vampires were “discovered”; they “did not exist until the emerging medical profession and natural philosophers began to try to explain them and they were thus named and categorized as vampires.” When, for example, a recently deceased woman was reported to be attacking villages in Moravia and her corpse was found to have fresh blood in it, Holy Roman Empress Maria Theresa deployed two doctors and the head surgeon of the military to look into the matter. Such investigations were thoroughly documented, as Groom writes: “Detailed forensic examinations were accordingly made and records kept, including catalogues of signs and symptoms, and much learned (and pseudo-learned) work was published in professional journals.” Indeed, in the 1730s, many such journals made their reputations for scholarly seriousness and rationality with accounts of outbreaks of vampirism in Eastern Europe.

Even Enlightenment philosophes weighed in, trying to discern what was mere religious superstition and how, if vampires did indeed exist, they might be incorporated into knowledge about the natural world.
sharetweet

As these reports spread west, debates about vampires “detonated.” One of Groom’s most interesting chapters recounts the different ways religious authorities responded to reports of vampires, and how their responses reflected their own theological and political priorities. The Catholic Church, for example, downplayed such reports; clergy saw that they might lose their influence if people resorted to near-pagan methods of protecting themselves from spiritual peril. Eastern Orthodox clergy, on the other hand, promoted belief in vampires and presided over stakings and decapitations of suspect corpses to reinforce their power over encroaching Roman Catholicism. From a theological standpoint, the issue was even thornier. For Protestant theologians, “vampirism, seemingly engineered by the Devil and his demonic minions, smacked too much of Catholic superstition” and so was dismissed. Catholics, theologically invested in corporeality, were in more of a bind. If the dead really were being raised to hunt the living, did that mean the Devil was as powerful as God? This couldn’t be true—so was vampirism a diabolical illusion meant to lure sinners into pagan beliefs? Even Enlightenment philosophes weighed in, trying to discern what was mere religious superstition and how, if vampires did indeed exist, they might be incorporated into knowledge about the natural world.

Bloodsucking monsters also transformed political life. Groom writes that as scientific discoveries increasingly “medicalized” the human body, so the metaphor of the “body politic” changed as well. Vampire analogies proved useful for political agitators: usurers were called vampiric for their predatory loans; monks sucked funds from the wallets of peasants; corrupt officials cannibalized their citizens. In other words, “blood oozed through eighteenth-century thought…simultaneously part of everyday life, a mysterious substance of folklore and superstition, [that] lay at the heart of the Christian mass and the symbolism of the Church.” The figure of the vampire encompassed all these aspects.

It is from this frothing and fearful era in European history that the literary Gothic vampire was born in the nineteenth century. While vampires originated in Eastern Europe, Groom writes, their main “artery” was England, where the vampire became Gothicized and Romanticized into the figures we know today. Anxieties over medical advances—corpse-harvesting; vivisection; and a new institution, hospitals—seeped into vampire stories. As theories of evolution began to gain traction, vampire mythology became a vehicle for expressing fear of regression to a primeval state—one in which we are all bloodthirsty predators. Soon enough it was fear of women—specifically the “New Women,” who “dressed casually, smoked, rode bicycles and even—horror of horrors!—educated themselves.” (It is telling that most nineteenth-century vampires were female.) Karl Marx applied the vampire metaphor to economics and politics: “Capital is dead labour which, vampire-like, lives only by sucking living labour, and lives the more, the more labour it sucks.” Stoker’s Dracula is a culmination of all these aspects of the nineteenth-century vampire. The text is a “mass of papers—a scrapbook of textual proofs that reflect the earlier emphasis on evidence and authenticity.” Dracula is brilliant for its ability to set old folklore against new technology, to combine “contagion and the body, blood and the economy, political power, the invisible and vampirism” that haunted the Victorian imagination while drawing on an earlier obsession with empirical evidence and investigation.

Lurking in the cracks of social, theological, political, and medical knowledge, vampires drew “uncomfortable and disturbing attention” to society’s shortcomings. Always threatening to escape the cracks, to “ooze” and “contaminate,” vampires confound boundaries and borders, natural and supernatural, self and other. Groom writes, in the most chilling passage I have read in an academic text, “Vampires are not both dead and alive; they are also undead. And so they disturb the primacy of animated life and humanity by replacing the fundamental distinction of life and death with a third state of being”—that is, unbeing.

Though Groom impressively manages to analyze vampires’ influence on almost every facet of private and public life—social, theological political, medical, cultural, sexual, literary—over the span of four centuries, there are a few missteps. For such a well-organized book, the writing can meander. And in his evident enthusiasm for the topic, Groom sometimes loses the reader with examples that don’t quite find their way back to a larger point. But the examples are so fascinating in themselves that this is forgivable.

Groom writes that he has “tried to resist essentializing the vampire as an elemental mythic type,” or letting it be a mere canvas for theories about sexual neuroses, colonialism, or feminist theory, “valuable as these approaches might be in other ways.” Instead, “the vampire becomes more thought-provoking and more perplexing” in its correct historical context, and when it is allowed to seep from the fractures in our thinking and the contradictions of daily life. “Vampires are good to think with,” he writes. Let them be the “roving thought-experiments” that they are. I agree with him there. Just be careful at night.