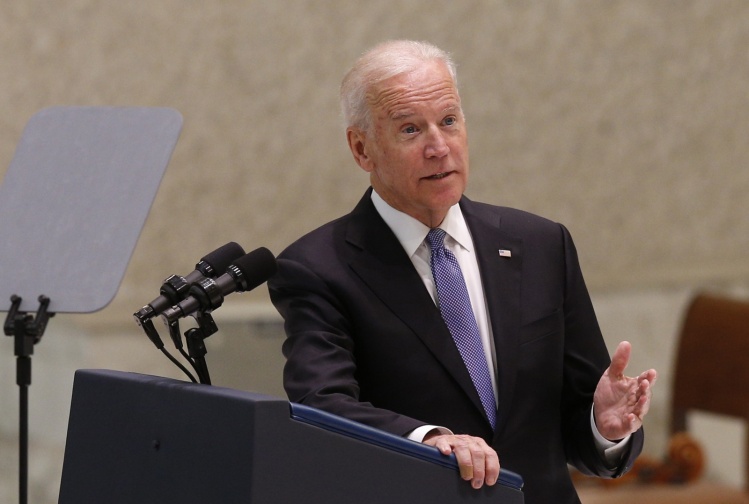 Joe Biden at the Vatican in 2016 (CNS photo/Paul Haring)

Joe Biden’s decision to seek the presidency is a clarifying event. It will require those who see Donald Trump’s tenure as disastrous to decide whether restoration or transformation should be the primary task after he leaves office.

And Biden’s entry gives greater definition to the sprawling contest for the Democratic nomination. The race starts as Biden vs. Sen. Bernie Sanders, I-Vt., with the remaining candidates jostling for position. It’s unlikely to stay that way. To emerge as one of the final three or four left standing, each candidate will have to focus more sharply on which competitors might block the way.

In his announcement video last Thursday, Biden did not talk about his service as Barack Obama’s vice president or his connection with blue-collar white voters. Using Trump’s shameful response to the 2017 white supremacist, neo-Nazi rally in Charlottesville, he sought to make the election a referendum on the country’s core values and implicitly argued that his experience and broad appeal equip him to take on and defeat the man nearly all Democrats loathe.

The only issue that truly matters, Biden signaled, is whether Trump will be deprived of a second term. This, he said, would determine whether his presidency would be seen as “an aberrant moment in time,” or if a reelected Trump would “forever and fundamentally alter the character of this nation.”

But Biden’s most clarifying comment came later Thursday in Wilmington, Delaware, when a reporter asked if he had a message to the world. Biden replied: “America’s coming back like we used to be—ethical, straight, telling the truth ... supporting our allies, all those good things.”

Biden’s hope is that Trump has created a thirst not for adventure and experiment but for reassurance and a glorious tranquility.
sharetweet

A lot hangs on the phrase “back like we used to be.” It suggests that the nation’s priority is a restoration of its core principles and normal life. The 76-year-old Biden will thus make an argument similar to the one offered by 79-year-old House Speaker Nancy Pelosi when she successfully put down a rebellion against her leadership. She described herself as “a bridge” between the present and a new generation of leadership. Biden would be the helmsman moving us safely past the storm.

This will attract many primary voters—and, in a general election, moderates, independents and dissident Republicans. But a significant number of Democrats (and many candidates in this field, especially, Sanders and Sen. Elizabeth Warren, D-Mass.) believe fervently that a return to “decency” and “honor,” to use Biden’s words on ABC’s “The View” on Friday, is not enough. Trump’s victory, they contend, revealed deep injustices in American society that must be righted, and they see 2020 as an opportunity to move “much further and much faster toward progress,” as Adam Green, a Warren supporter and leader of the Progressive Change Campaign Committee, told The Wall Street Journal.

Progressives will make their case with visionary proposals, Warren’s stock in trade, and by trying to make Biden yesterday’s man. He will have to explain past actions that have come under fire in the context of current opinion in his party—his handling of the Anita Hill-Clarence Thomas confrontation, his leadership on the 1994 crime bill, his habit of touching and embracing people, some of his Senate votes—without getting bogged down in a carnival of apology. His appearance on “The View” showed that this will not be easy.

In the cross-cutting competitions to come, Sanders and Warren are splitting the advocates of far-reaching change while Sens. Kamala Harris, D-Calif., Cory Booker, D-N.J., and perhaps Warren, will be contending with Biden for African American votes. Harris and Warren have the advantage for now over Sens. Amy Klobuchar, D-Minn., and Kirsten Gillibrand, D-N.Y., among voters who insist that Hillary Clinton’s defeat should not be read as dooming a female candidate. Biden himself will challenge Klobuchar, South Bend Mayor Pete Buttigieg and Beto O’Rouke for the hearts of moderates.

And in one of the ironies created by the passage of time, Buttigieg and O’Rourke will be echoing the same generational call-to-arms that a 44-year-old Biden sounded when he first ran for president in 1987.

That Biden has potential within so many factions is a sign of the strength he brings to his third quest for the presidency. Unlike an earlier candidate who succeeded on his third try, a 69-year-old Ronald Reagan in 1980, Biden draws not on his party’s ideological passions but on the comfort he creates by occupying the Democrats’ center of gravity. His hope is that Trump has created a thirst not for adventure and experiment but for reassurance and a glorious tranquility.

The NAACP & the Tea Party