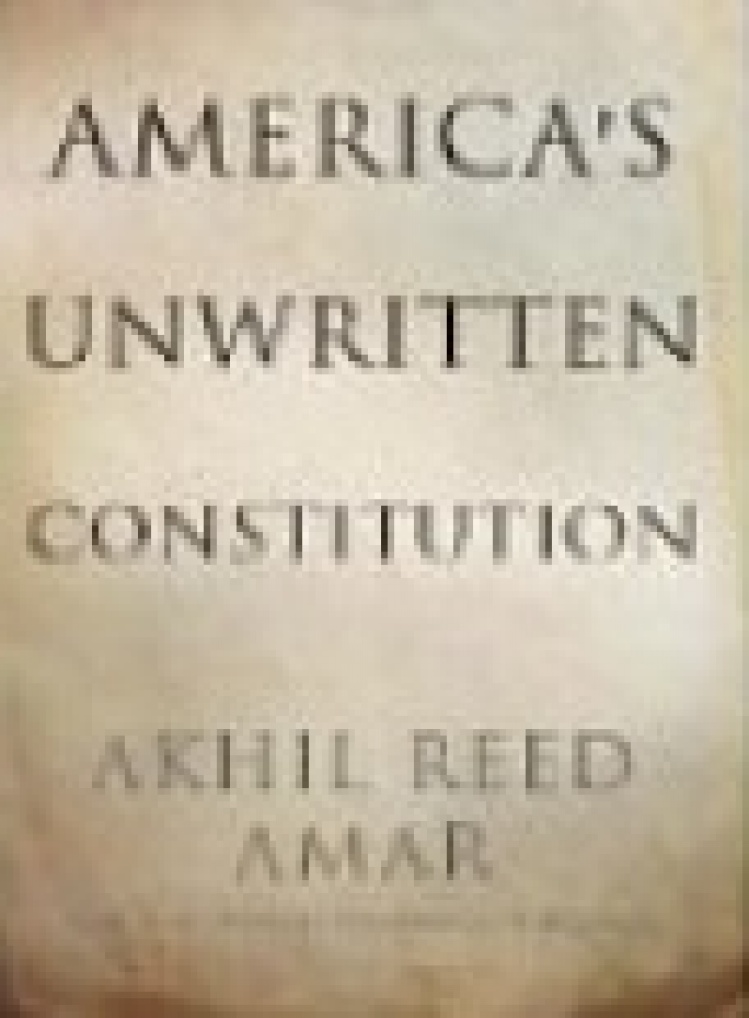 Akhil Reed Amar’s America’s Unwritten Constitution is full of fascinating history, as well as novel and often persuasive analysis of how our written Constitution blends with an unwritten one to form a coherent whole. Amar argues convincingly that constitutional interpretation cannot rest exclusively on the actual text of the Constitution and the original understanding of its provisions. But he also argues that Supreme Court justices act inappropriately if they impose legal doctrines that are genuinely inconsistent with the written text. Such decisions, he asserts, will almost inevitably be abandoned.

America’s Unwritten Constitution can be read as a supplement to Amar’s earlier book, America’s Constitution: A Biography (2006), which was about the written Constitution—the circumstances of its composition, what it meant then, and what it has come to mean since. The new book concerns the binding constitutional principles that reach beyond the clear words of the text. These principles fill in gaps in the written document, show how important amendments bear on earlier provisions, and take account of other historical developments that reflect changes in ideas about government and rights. Amar has called himself a “textualist,” but he believes that the written Constitution needs to be understood broadly. In his view, many important legal decisions are correct in their conclusions but mistaken in their justifying theory. He also believes that there are constitutional limits that have yet to be acknowledged.

Amar writes that he is aiming at “general-interest readers who care about the Constitution.” Such readers should be warned about two things. First, the author does not explain in any detail the many varieties of “unwritten constitution” until four pages before the end of the book. Second, a fair number of his claims about what counts as a proper reading of the Constitution are far from obvious; indeed, a few of them struck this reader as a stretch. In his preface to America’s Constitution, Amar explicitly acknowledged that his is “an opinionated biography of the document,” and his postscript noted the deliberate omission of “quibbling qualifiers.” He is no less opinionated in this book, and no more disposed to qualify all his claims.

“Unwritten constitution” turns out to be a fuzzy concept. Great Britain, for example, is often said to have an unwritten constitution. In modern centuries, the principles of this “constitution,” based on past practices and fundamental values, have affected judicial development of the common law and interpretation of statutes; but the British constitution does not preclude new legislation, since Parliament has the authority to override whatever the constitution encompasses. Similarly, considerations that are not legally binding can exist alongside a written constitution, and certain principles that Amar develops fit squarely into this category. He writes, for example, that it would be wrong to deny Puerto Rico statehood if that’s what a majority of its citizens want, though the Constitution provides no guidance in the matter. Likewise, he claims that the number of members in the House of Representatives will not be sharply altered, that the two-party system is firmly settled, and that a “responsibility” of citizens to “look forward in time and make our constitutional donation” is “an integral part of America’s unwritten constitution.” None of these things is required by our written Constitution, nor even by any law. Rather, they are implied by our established practice and political philosophy. Such considerations may bear on the legal resolution of certain issues, such as voting laws. Among the principles that do carry a kind of legal force are obvious implications and aims of the written document (such as “separation of powers”), more subtle implications of its terms and structure, matters the text has left genuinely open and that have been filled in by later developments, and standard legal techniques of interpretation.

TO DEMONSTRATE THAT the text of the Constitution is not always a safe guide to its application, Amar points out that if a vice president were being impeached, he would obviously have to relinquish his normal position as presider over the Senate—this despite the fact that the text of the Constitution does not mention this eventuality. It would happen anyway because of the various constitutional provisions that do preclude persons from judging their own cases. Amar then makes the more debatable claim that, from the very beginning, it was not only the federal government that could not forbid political speech but also the states, even though the Constitution does not say so explicitly. Instead, according to Amar, it is implied by the fact that the Constitution was established by “the people,” by the safeguards of congressional speech, and by the First Amendment’s reference to the freedom of speech (implying a preexisting right).

As for the Ninth Amendment, which states that “the enumeration in the Constitution, of certain rights, shall not be construed to deny or disparage others retained by the people,” Amar regards its protections as robust. He also proposes that the phrase “by the people” implies that new rights developed over time should be afforded constitutional status only after they are widely accepted. (One could, alternatively, interpret those words to mean that the amendment covers only the rights of people, not those of states or other entities.) Objecting to the Supreme Court’s use of the Fourth Amendment to require the exclusion of illegally seized evidence in criminal cases, Amar points out that no such understanding was widely accepted within the states at the time of the Constitution’s ratification. Amar regards this doctrine as benefitting “only guilty persons,” but a defender could respond that if the Fourth Amendment successfully deters searches against anyone suspected of a crime, it will effectively protect many who are in fact innocent.

Amar offers a rigorous defense of Brown v. Board of Education. Whatever may have been the prevailing opinions about racially segregated schools when the Fourteenth Amendment was adopted, by 1954 it was obvious that such schools effectively denied blacks “equal protection of the laws.” Even many who agree with Amar on this basic point, however, find it harder to justify the extension of Brown to the federally controlled District of Columbia. After all, the Bill of Rights, which applies to D.C., lacks any explicit equal-protection guarantee like that which the later amendment applies to the states (but only to the states). Amar’s answer—resting on the Ninth Amendment’s protection of unspecified rights, the Fourteenth Amendment’s extension of citizenship to “all persons born or naturalized...in the United States,” and a highly expansive understanding of what a “republican form of government” entails—is that all branches of government must accord equal treatment. He argues that when one regards the Constitution as a whole, one should conceive rights against state and federal governments as essentially the same.

In a fascinating chapter titled “America’s Feminist Constitution,” Amar accords a sweeping status to the Nineteenth Amendment, which guarantees women the right to vote. Starting from the uncontroversial premise that the amendment must be seen as a correction of past injustices, he urges that it has a pervasive effect on how the rest of the Constitution should now be viewed. He contends, for example, that the right of women to serve on juries should have been seen by the Supreme Court as an implicit aspect of their right to vote rather than derived from the Fourteenth Amendment’s equal protection clause, which, according to Amar, safeguards “civil” rights, not “political” rights such as jury service.

Given Amar’s belief that novel constitutional rights that can’t be derived from the text itself should not be established prior to widespread recognition, Roe v. Wade poses a serious problem. Here, surely, was a case of the High Court moving beyond what the text of the written Constitution explicitly provides before public opinion had been settled. In his discussion of Roe, Amar offers an imaginary dialogue between a married couple, Adam and Eve, in which Adam defends laws forbidding abortion and Eve points out all the ways in which such laws impose burdens related to the costs of having children on women instead of men. The suggestion is that laws forbidding abortion impose unjust, unequal, and therefore unconstitutional burdens on women. But Amar’s imaginary dialogue does not really address what many regard as the fundamental issue at stake. What if one recognizes that any law forbidding abortion inevitably burdens women much more than men, while also believing firmly that a fetus is already a human life warranting legal protection? Amar does not acknowledge, much less answer, the fundamental question of whether in this context gender equality should take precedence over the protection of human life.

In a chapter titled “Conscience,” Amar addresses a subject overlooked in most discussions of the Constitution: the right of jurors to “nullify” a law’s application by refusing to convict someone whose guilt is clear. That this has been a fundamental aspect of our jury system throughout history is clear, but Amar’s insistence that judges should routinely inform jurors of this power does not necessarily follow. The problem is twofold. First, reminding jurors of this option could lead to hung juries in too many cases. Second, if juries are informed that they can “nullify” a law’s application, does it follow that lawyers should be able to argue for nullification—a practice that could divert many trials from their main focus. Amar’s argument for always telling jurors about this right is compelling, but practical complications make it doubtful that the practice could ever be widely adopted.

America’s Unwritten Constitution is an ambitious book, and an impressive one. It tackles many of the most important and controversial issues in constitutional law. Amar’s arguments are uniformly informative and ingenious, even if they aren’t all equally convincing. This book demonstrates with force and clarity that the relation between authoritative written texts of the past and conceptions and practices that have developed over time is a central concern not only of religious doctrine but also of secular law.

Kent Greenawalt is University Professor at Columbia University, teaching in the law school. He is the author of Statutory and Common Law Interpretation (Oxford), among other books.