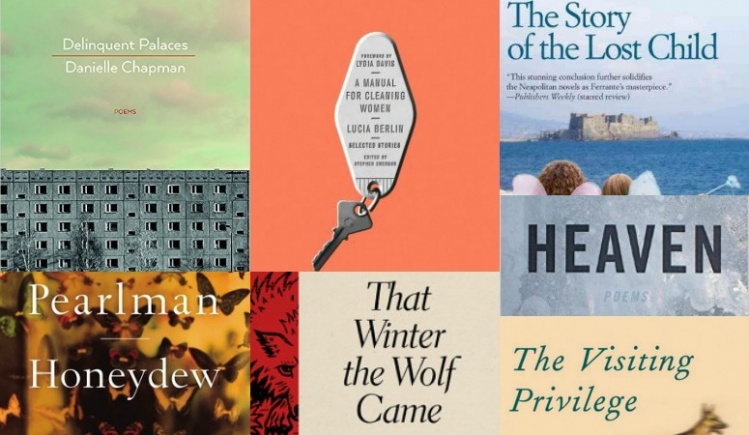 Book critics often start off their year-end lists by way of apology. It’s ridiculous to rank works of art, they say; I haven’t read enough to be an authority on the matter; there were too many (or too few) good books written this year; et cetera, et cetera.

Still, while I recognize the absurdity of all literary list-making, I love writing this post every year, in part because I’ve always loved making silly lists (I used to obsessively rank and re-rank the greatest center fielders of all-time, trying desperately to justify putting Ken Griffey, Jr. in the top two), but mainly because they are a reminder that, despite our sense of cultural decline, good books get published all the time.

Elena Ferrante, The Story of the Lost Child

Comparisons have been drawn between Tolstoy and Ferrante, largely because they both offer sweeping fictional sagas that move between individual lives and the historical circumstances that hem such lives in. For me, Ferrante is most like the Russian master in a different way, best expressed by Virginia Woolf: “Even in a translation [of Tolstoy] we feel that we have been set on a mountain-top and had a telescope put into our hands. Everything is astonishingly clear and absolutely sharp. Then, suddenly, just as we are exulting, breathing deep, feeling at once braced and purified, some detail — perhaps the head of a man — comes at us out of the picture in an alarming way, as if extruded by the very intensity of its life.” There is simply more astonishing clarity and sharpness, more intensity of life, in Ferrante than in any other writer I read this year. Every element in the fourth and final novel of the Neapolitan series felt both absolutely, painfully inevitable and absolutely, delightfully unexpected.

Spahr, like Lawrence Joseph, writes within history and to history. Her book straddles the line between poetry and prose, working by repetition and accumulation to explore the connections between environmental degradation and the degradations of global capitalism.

In one “poem about oil extraction in iambic pentameter,” for example, Spahr offers a Whitmanian list of the “variables” involved in deepwater drilling: “Various valves. Pressures. // Buoyancies. Bow spring. Top plug. Shoe track. Floatshoe.” These variables, Spahr writes, are “the / New muses of innovation, common // Vocabulary, that covers over the / Elaborate simplicity of this, // This well, Macondo well.” The poem, and much of the rest of the collection, is about our “Relationship to oil. Our oil”—how our political, financial, and personal lives are dependent upon a process that results in the destruction of the environment and, occasionally, in the deaths of those who work in the industry.

Spahr joined the Occupy movement in Oakland in 2011, and “Turnt” describes the exhilarating and precarious moments of community that this movement enabled: “Sometimes it feels like it is over and it’s not. / Sometimes it feels like it has just begun and it’s over.” In “Transitory, Momentary,” she echoes Eliot’s Four Quartets (“Only through time time is conquered”) in lines that represent what we might call an incarnational politics, one that finds meaning in the seemingly minor and material: “It might be that only through the minor we feel enormity. It might be that there is nothing to epiphany if it does not hint at the moment of sweaty relation larger than the intimate. For what is epiphanic song if it doesn’t spill out and over the many that are pulled from intimacies by oil’s circulation?” That Winter the Wolf Came is important reading for those interested in poetry, politics, and the relation between the two.

Eka Kurniawan, Beauty Is a Wound

Kurniawan, one of Indonesia's most celebrated young novelists, had two works translated into English this year. Beauty Is a Wound, published by New Directions, can be fantastical: its startling first sentence reads, “One afternoon on a weekend in May, Dewi Ayu rose from her grave after being dead for twenty-one years." Indeed, ghosts are a regular, spectral presence throughout the book. But Kurniawan uses these fantastical elements for a serious purpose: to explore the various forms of violence--colonial, political, ideological, sexual--in Indonesian history. Beauty Is a Wound is the most impressively plotted novel I read all year, and it introduces Western readers to a major global voice.

Marilynne Robinson, The Givenness of Things

Another year, another brilliant book by Robinson. We’re getting spoiled. This collection exhibits her most serious and straightforward engagement with theology yet, with essays on Christology, "Christianity as an ethic and Christianity as an identity" (published in the magazine), and the importance of grace in Shakespeare’s plays.

These are three very different collections from three very different geniuses of the short story form. Pearlman reminds me of Alice Munro in her ability to quietly telescope an entire life into a single paragraph; Williams reads like a Samuel Beckett of the American Southwest, with the same black humor occasionally interrupted by moments of lyricism; Berlin reads like no one I’ve read before. Here are some sentences from each. From Pearlman’s story “Assisted Living”: “And Muffy’s voice—there was nothing to it. It was as if she had once been almost smothered and then allowed to live only if she limited her vocabulary and breathed hardly at all.” From Williams: “She remembered the shepherd and remembered being, herself, good. She lived aware of happiness.” From Berlin: “There must be something the matter with my inner ear. My son Willie never calls.”

I’ve written on Chapman’s collection before. Chapman moves through traditional lyric territory —love and loss, visions and terrors—and she does it with a complete command of form and voice. She is a remarkable poet, and this is a remarkable first collection.

Phillips's The Ground was described in Commonweal as "the best first book by an American poet ... in years." His second book, Heaven, is better. The forms and tones are more varied, the speculations more expansive, the ghosts of the poetic past--Homer and Dante, Stevens and Frost--more powerfully inhabited and transfigured.

Phillips shifts the meanings of "heaven" from poem to poem. In "Like a Bullet Shot Backwards Through Time," heaven refers to both sucess in sports and success in loving: "He prayed his team would win the World Cup. / She prayed he'd just care more. 'If that ever / Happens,' they both loved to say to themselves, 'It'd be like I'd died and gone to Heaven.'" In another, heaven is just, as the title puts it, "An Excuse for Mayhem." In many others, it is the imagination itself, echoing Keats's claim that the "imagination may be compared to Adam's dream,--he awoke and found it truth."

As an indication of the richness this collection offers, here is "Mirror for the Mirror," in full:

This night sky won't always be so Rothko,

Won't always be something you've seen before.

Otherwise, it would always be what it

Was in sheerest separation of is

And as: self separated from self, self

Unparadised, as though there were a place

Somewhere at the end of an endless bridge,

A continent of light, called Paradise.

Christian Wiman: Hammer is the Faith