‘Belief Does Not Embarrass Me’ 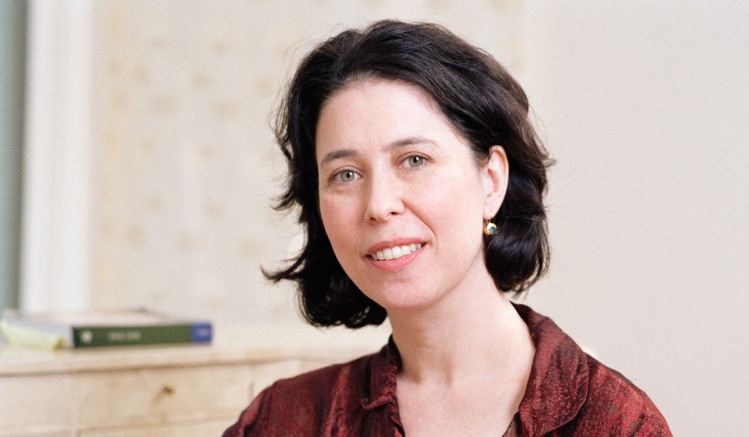 In her 2010 novel The Cookbook Collector, Allegra Goodman describes the egoism of Jonathan Tilghman, head of the fictional (and now unfortunately named) data-security company ISIS: “Jonathan thought about his day, not other peoples’. He meted his own stride.”

This is something of a first principle for Goodman: we are all always meting our own stride, attending more closely to our desires and fears than to those of others. Goodman’s novels, including Intuition (2006) and Kaaterskill Falls (1998), ask how we might expand our circle of interest and care, how we might move away from our natural egoism and towards what George Eliot called “immense sympathy without check.” Goodman also asks what role art might play in such a sympathetic expansion.

The Chalk Artist, set for release on June 13 by Dial Press, is Goodman’s sixth novel. Set in Cambridge, Massachusetts, the novel focuses on three characters: Aidan, a teenager obsessed with a video game called UnderWorld; Collin, a talented artist specializing in chalk who has recently begun to work for the company that produces the games Aidan so loves; and Nina, a high-school teacher who brings the various narrative threads together. (She teaches Aidan, dates Collin, and counts the gaming company’s founder, Viktor, as her father.)

The novel engages with many of Goodman’s familiar concerns: the relationship between science and art (Goodman writes as well on science and research as any novelist around, and her husband is a professor of computer science at MIT); the competing demands of work and life, professional ambition and personal happiness; and the nature of sympathy—how it is both a moral and an imaginative faculty. In its descriptions of gaming, The Chalk Artist also contains brilliant and sustained passages of world-building: the intricate, immersive descriptions of sublime landscapes and creatures we tend to encounter in works of fantasy rather than in works of realism.

Goodman and I spoke recently by e-mail.

Anthony Domestico: In a previous interview, you said that “believing in God and being a Jew who embraces the religious aspects of Judaism is actually very liberating, because you don’t have to identify with all the cultural stuff … If you do believe in God, it’s a given. You don’t have to talk about it anymore, so it’s freeing yourself up to be Jewish in other ways.” Has believing in God liberated you in any way as a novelist, freed you up to do things you otherwise wouldn’t or couldn’t have done? Has it allowed you to explore certain material, or tell certain stories, or inhabit a certain kind of mind?

Allegra Goodman: For many American-Jewish writers, the dominant motifs have been cultural, secular, sometimes comic, often satirical. Writing about the religious component of Judaism, I found my own themes independent of the New York experience and the immigrant experience. (I did not grow up in New York, and my parents were not immigrants). In novels like Kaaterskill Falls, I’ve been able to write sympathetically about religious people—and beyond that, I’ve been able to take a religious point of view—because belief does not anger or embarrass me.

AD: What contemporary writers do you think are doing particularly interesting work exploring the nature of religious belief and experience?

AG: Marilynne Robinson is the one who comes to mind. Her novel Gilead and its sequels develop rigorous and moving inquiries of faith, forgiveness, sin, and redemption. I can think of many other writers who doing interesting work, but novelists such as Kazuo Ishiguro, Zadie Smith, and Elena Ferrante write about race, gender-roles, culture, class—questions of individual and national identity. They dramatize ethical dilemmas outside a religious framework.

Role-playing games are open-plan without an end; a novel has a closed structure with a beginning, a middle, and an end
sharetweet

AD: The Chalk Artist opens in one of my favorite places in the world, Grendel’s Den—“the old Cambridge dive, loud, warm, and subterranean”—and it includes lots of other local Cambridge color. Intuition and The Cookbook Collector were also, among other things, great Cambridge novels. Henry Adams wrote, “The chief charm of New England was harshness of contrasts and extremes of sensibility—a cold that froze the blood, and a heat that boiled it.” What is the chief charm of Cambridge for you?

AG: It does get cold in New England, but heating systems are better than they were in Henry Adams’s day! For me the chief charm of Cambridge is its people and their conversations. Cambridge is rich in artists, scientists, professors, students, and researchers from all over the world. There is also a town-gown tension and a disparity between rich and poor in schools, neighborhoods, and opportunities. I’m interested in all of that.

AD: I just got back from the 2017 International Conference on Narrative, where there seemed to be almost as many papers on videogames as there were on novels. What do you make of the increasing tendency to treat videogames as serious works of art in their own right? What, for you, differentiates the experience of playing a videogame from, say, reading a novel?

AG: Fascinating that critics read videogames that way. I do think some games are works of art, although their medium is visual rather than verbal. Both games and novels allow the reader/player to become a protagonist in the theater of the imagination. Both build worlds. In my opinion, the big difference between game and novel is in narrative structure. Communal role-playing games are open-plan without an end. A novel—at least the kind I write—has a closed structure with a beginning, a middle, and an end. I like that closed structure, and I feel I can say more with it.

AD: In 2008, you published The Other Side of the Island, which bookstores classified as a dystopian young-adult novel. Why do you think these two genres—dystopian fiction and young adult fiction—are so successful now? Did the practice of working within these genres influence how you approached The Chalk Artist—in particular, the world-building you did with regards to UnderWorld?

AG: I suspect the popularity of YA and dystopian novels has something to do with a desire for allegory and old-fashioned morality tales. In fact, you might find your religious framework here in dystopian, post-apocalyptic fiction. Here, and in videogames, you find strict codes of authority, the “rules of the game,” the life-or-death quest and struggle that people crave. The Hunger Games takes a game as its subject as well as its structure. All this is in contrast to so-called literary fiction, which encodes and internalizes ethical dilemmas—elevating character and sublimating plot. I play with the conventions of the quest and coming of age novel in The Other Side of the Island and in The Chalk Artist as well. In my YA novel, I built a world, and in The Chalk Artist, I explore what might attract young people to imaginary and immersive worlds. As for world-building, I think in many ways it’s easier to build a fantastic world than it is to describe a familiar one.

AD: This is a novel rich with poetry; I finished it wanting to go back to Dickinson and Whitman, William Carlos Williams and Amy Lowell. In fact, one of the novel’s most dramatic scenes features Aidan’s performance in a poetry recitation contest. What, in your own life, makes reading poetry different from reading prose? What different gifts or experiences do you look for when you’re reading poetry that you don’t necessarily look for, or don’t expect, when you’re reading novels?

AG: I think poetry bridges text and image. Poetry is visual in its imagery—but it requires close attention to words themselves. Words become jewels in poetry, while they are often tools in other genres. The Chalk Artist explores the tension between word and image and then follows Aidan through a third door—into poetry. Gaming prepares Aidan for this move.

AD: Critics have often rightly pointed to Jane Austen as an important influence for you; I’ve often thought that George Eliot, with her use of multiple narrative perspectives for aesthetic and ethical purposes, is another. What precursors do you feel lurking in the background of this novel? In particular, were there any works, literary or otherwise, that helped you imagine and describe the fantastical texture of UnderWorld?

AG: I do respect George Eliot greatly—especially her use of multiple perspectives. Tolstoy is my hero as well. He has such a fluid imagination. Greek myths lurk in the background of this novel, and inform the gaming scenes.

AD: At one point, you write, “Escapism and delusion were not problems but products in Viktor’s lexicon.” How would you respond to the ancient charge—as ancient as the novel itself, really—that novel reading is escapist? In your own best reading experiences, how has the escape into an imagined world changed your relationship to the “actual” world?

AG: Here’s my theory: I think both fiction and role-playing games involve a narrative journey. When that journey never ends, it feeds an addictive cycle. When that journey has an end, it brings us back to ourselves and to our own lives. This return allows us to reflect. Perhaps this is why I prefer a closed structure for books and games. I do not think novels are necessarily more worthwhile than games. A novel can be a trivial waste of time, and a game can teach. Whatever the genre, I think a successful narrative allows us to participate, to try on new roles and points of view. At their best, novels and games serve as vehicles for discovery.