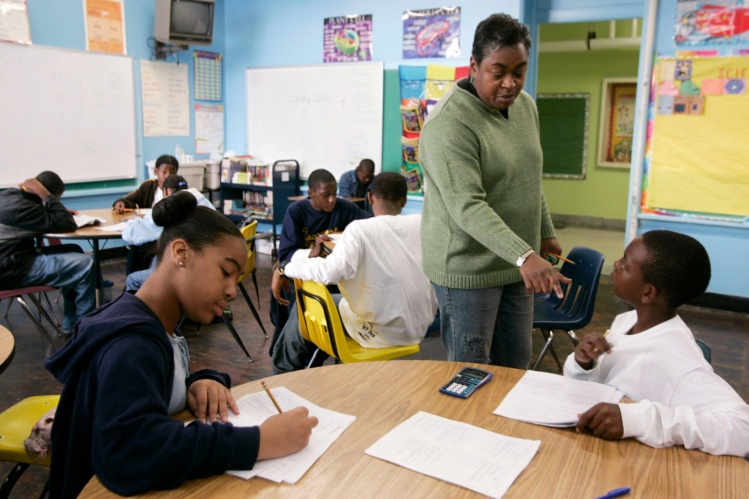 My family is from New Orleans. My father and his siblings grew up in a white neighborhood, intentionally zoned, and attended all-white schools in the 1920s and ’30s, also intentionally zoned. In the 1950s, they relocated to neighboring St. Bernard Parish, as did many white residents of New Orleans. My mother also grew up in New Orleans and relocated to St. Bernard, where she attended an all-white high school. She was a freshman in 1960, and just when Ruby Bridges became the first Black child to attend New Orleans’s all-white William Frantz Elementary School, St. Bernard opened a school on the St. Bernard-Orleans parish line expressly to allow white residents of New Orleans to use vouchers to escape federally mandated integration of the city’s public schools. Found to have circumvented integration orders, the school was forced to close a year later. But anti-Black sentiment never waned, and decades of white flight from New Orleans followed. Meanwhile, the state diligently set about eliminating economic advancement opportunities for the remaining Black population, limiting employment and housing options while cutting back drastically on education. Soon enough, the city was bereft of a Black middle class and the tax base needed to fund basic services, including public schools. And so, as one might logically expect, the public education situation in New Orleans became dire.

I still live in southern Louisiana, where I teach at a public school, and I have yet to hear any authoritative white voice acknowledge responsibility for the oppression generated by white-citizen resistance to Black-citizen advancement. I wondered if any such acknowledgment would appear in Douglas N. Harris’s book about the successful “reform” of New Orleans public schools since the state took over after Hurricane Katrina, titled Charter School City: What the End of Traditional Public Schools in New Orleans Means for American Education. The answer is no.

Harris, the director of the Education Research Alliance for New Orleans and a professor of economics at Tulane University, focuses instead on data—specifically, on test scores and graduation rates in the years prior to the devastating 2005 storm and in the years that followed, from 2006 to 2015. By his accounting, the numbers went up post-Katrina, which he credits to intervention by the state in the form of charter-school initiatives. Now, data can be compelling, and reformers will often point to metrics like improved test scores to make the case for charter schools. But when I look at the data Harris cites, I think of the audit that’s being conducted at the request of the New Orleans superintendent of schools because of missing test scores and irregularities in high-school transcripts and class credits. I think of the numerous lawsuits calling for the Louisiana Department of Education—which was then run by a champion of the charter reform efforts in New Orleans—to release suspect testing data for independent review. So I can’t say I have confidence in the integrity of the data that Harris has analyzed.

The reform community moved to sideline the predominantly Black community of New Orleans in its planning.
sharetweet

But that is not my principal concern. What’s more troubling is the narrative Harris spins out about the state takeover itself. That effort was led by Leslie Jacobs, former state school-board member turned businesswoman, who with a handful of other affluent whites form the core of what Harris calls the “reform community.” It was Jacobs who instigated things by drafting legislation that classified most New Orleans schools as “failing.” From there, the reform community—working out of office space provided by Tulane University—moved to sideline the predominantly Black community of New Orleans in its planning. Even as the city’s economy was still reeling from Katrina, the group engineered the mass firing of Orleans Parish School Board teachers. Harris describes the firing as an unfortunate necessity in achieving “reform”—that is, replacing traditional board-led public schools with a portfolio of independently operated charters. But the decision was also motivated by the inconvenient fact that the teachers were unionized, and thus a potential force of resistance. Reformers pointed to the union’s contract, which they said included various objectionable provisions—for example, that teachers were allowed to be late to school ten times before any disciplinary action could be taken, and that administrators were forbidden to observe teachers in their classrooms. I am a member of my local teachers’ union and I have never heard of such provisions. But never mind, because Harris’s intent is to celebrate Jacobs as a maverick of change, seizing the moment and coming together with other white, affluent New Orleanians to create this charter-school city. “In effect, what Jacobs and the reform community have now done is to create an entirely new type of school district, one intended to entrench school-level autonomy, parental choice, and performance-based accountability,” he concludes.

These are, of course, the usual buzzwords of the contemporary reform movement. But elsewhere in the book Harris seems to undercut such pronouncements. He admits at one point to hearing from parents who want neighborhood schools as an alternative to charters, and acknowledges (perhaps with furrowed brow?) that such a choice does not exist. In discussing the chartering process, he interviews Black community members who sought approval to open charters but were told that local groups could not apply. He further reveals that residents have no say in how charter authorizers are selected, but must instead abide by the decisions of those approved by the state.

Near the end of the book, his reservations briefly become more explicit. Pausing in his praise of the reform community, Harris wonders if in fact “the New Orleans model is best for New Orleans.” He goes on to note a number of issues, including the inequity of free markets, the loss of geographic community, and the problem with “Jacobs and other reform leaders ma[king] their decisions behind closed doors.” It is in the area of community engagement, he writes, that the New Orleans reforms have been “least successful.” He had my attention, and I was satisfied to see him express concerns, but withholding those concerns until the closing pages made it seem as if two Harrises had authored the book: one the clinically distant statistician seeking to make a case through numbers, and one the social observer aware of the practical implications of these policies, and thus of the need to exercise caution in implementing them.

Would that the latter’s hand had been stronger throughout. If so, readers might have learned more about the huge impact of generations of Black disenfranchisement in the shaping of New Orleans public education. We might have glimpsed just how important community engagement really is, and had the chance to understand how vital it is to pay attention to what the community has been through and to listen to what it’s saying. Charter School City delivers a lot of informative detail on the New Orleans reform effort, but by glossing over the critical importance of community involvement in all aspects of education decision-making, it comes up short. I consider it the best off-base book on public education that I have read to date.

Mercedes K. Schneider, who has been a teacher for twenty-six years, is the author of four books on education reform: A Chronicle of Echose: Who’s Who in the Implosion of American Public Education (2014, Information Age Press); Common Core Dilemma: Who Owns Our Schools? (2015, TC Press); School Choice: The End of Public Education? (2016, TC Press); and A Practical Guide to Digital Research: Getting the Facts and Rejecting the Lies (2020, Garn Press). She blogs on education reform at deutsch29.wordpress.com.