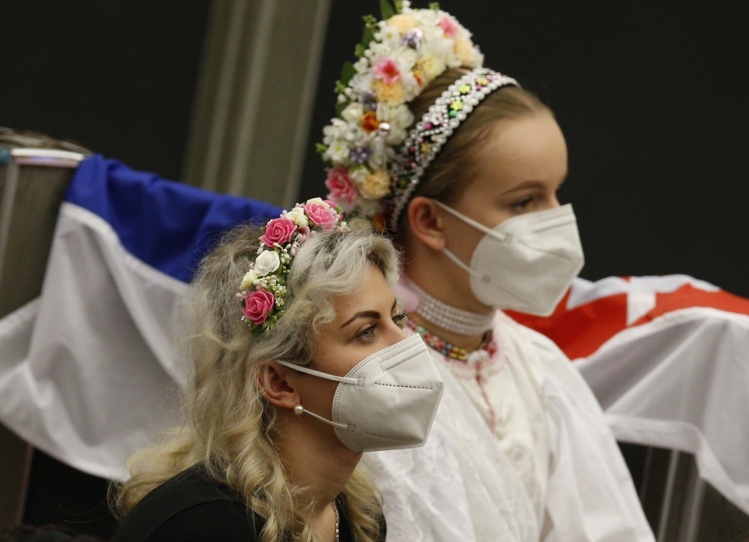 The Gospel reading (Cycle C) on this fifth Sunday of Lent is a well-known one. “The scribes and the Pharisees brought a woman who had been caught in adultery and made her stand in the middle. They said to him, ‘Teacher, this woman was caught in the very act of adultery. Now in the law, Moses commanded us to stone such women. So what do you say?’” (John 8: 3-5) This is not one of my favorite readings. The thought of a group of men, religious leaders, forcing a woman into the streets for public humiliation and execution is jarring. I know it’s important to read scripture in context, but the context is patriarchal and misogynistic, and while the Church doesn’t drag women into the streets for public shaming and violent judgment, women are nonetheless shamed and judged in the U.S. Church simply for being women.

When I was in my mid-twenties, I worked at a parish where the pastor instructed a relatively newly ordained priest and me to collaborate on a pastoral plan for accompanying members of our youth and young-adult ministries through their vocational discernment. I was excited about this opportunity to lead, and the priest and I worked creatively together. We also collaborated with other leaders at the parish, and at one point I met with a woman who had a position of authority. She seemed supportive and friendly as I presented our plan. She explained how she imagined her participation in it, but then she suddenly shifted the conversation. “So, you’re working with Father?” she asked. “You should be careful. People could start rumors about you.” I asked her what she was getting at. “You’re young and pretty and you’re around this young priest,” she answered. “People could say you’re tempting him.”

The future of the Church depends on the work of women, and so there must be a preferential option for their ministry.
sharetweet

I can still recall my shock. I didn’t know how to react, and, in that moment, I felt uncomfortable in my body. What she was really doing was expressing her disapproval of young lay women working in close proximity with a priest, but obscuring it with false concern about my well-being. Indeed, she might as well have placed me in the middle of the parish community to be objectified, judged, humiliated, and dehumanized. She was right about one thing, though: I was young, and my inexperience at the time kept me from responding the way I now wish I would have. Instead of questioning her own internalized sexism, I responded to her outrageous indirect accusation by saying I would never think of doing such a thing. One week later, the pastor told me that this woman had spoken to the young priest, my colleague, to warn him against working with young women, and he in turn asked the pastor to end our collaboration. That priest never spoke to me again.

The Gospel reading continues with Jesus saying to the scribes and Pharisees, “’Let the one among you who is without sin be the first to throw a stone at her’… and in response, they went away one by one, beginning with the elders” (John 8: 7,9). Jesus invites the woman to see that no one is left to condemn her. Often in scripture we find that the sins of the men who are religious leaders are sins rooted in the abuse of power, pride, and avarice, but one never hears of their objectification of women. The authors of the Gospels wouldn’t know to do so. Therefore, though the scribes and Pharisees recognized themselves to be sinners, I’m not sure they understood their sin against her, their inability to see her as a whole person, and similarly women in the Church today continue to be objectified. The “adulterous woman” may have survived the altercation, but her reputation would be forever marred within the community.

“Authority and Participation” is one of ten themes selected in the Synod on Synodality process “intended to highlight significant aspects of ‘lived synodality’” (Vademecum for the Synod on Synodality). Some of the prompting questions that accompany this theme include: How is authority or governance exercised within our local church? How are teamwork and co-responsibility put into practice? How are lay ministers and the responsibility of lay people promoted? Based on the experience I just shared, I would offer the following to the synodal conversation. My assignment to work with the young priest had the potential to be an exemplary example of collaboration between young lay women and clergy. The project offered me a share in the authority that only the clergy possessed in this community, but it was short-circuited by ingrained sexist beliefs and the perceived threat it posed to one person in leadership. Authentic collaboration in the Church is possible only when women are seen as whole and necessary, not as challenges or threats to the “purity” of clergy. In our current national climate and in a time of decline in trust in institutions, young women are less likely to tolerate the kind of behavior I experienced because their ability to recognize and name these sins, these injustices, is greater. The future of the Church depends on the work of women, and so there must be a preferential option for their ministry. Their authority cannot hang simply on the whims and permission of men. In today’s first reading, from Isaiah, the Lord says, “See, I am doing something new! Now it springs forth, do you not perceive it? In the wilderness I make a way, in the wasteland, rivers” (Isaiah 43:19). This the Lenten promise and my hope for the Synod.

This is the fifth in a series of reflections for each Sunday in Lent. You can read the others here.