The Art of Dying

In the early thirteenth century, Bishop Huge of Lincoln paid a visit to the abbey of Fécamp in Normandy. Ostensibly at least, his purpose was to venerate the relic of Mary Magdalene, a prized possession of the monks. Bishop Huge was not allowed to see the Magdalene’s bone itself. The limb was wrapped up in cloth. Out of his great religious fervor, however, the good bishop surreptitiously took out a knife and cut through the wrapping. After failing in his attempt to break the bone, he tried to bite off a piece of the saint, first with his incisors and finally, the report goes, with his molars. The molars did the trick. The bishop went home to Lincoln with a small mouthful of the saint for his cathedral.

The presence of what the great historian of early Christianity Peter Brown has called the “special dead” is only one way in which the Middle Ages thought about death. On the subject of death, the medieval imagination could be very resourceful. The current exhibition at the J. Paul Getty Museum succeeds admirably in proving this point.

“Heaven, Hell, and Dying Well: Images of Death in the Middle Ages,” curated by Martin Schwartz, will show at the Getty Center in Los Angeles until August 12.  The exhibition is small, only eighteen illuminated manuscript pages, accompanied by a variety of other objects, including examples of painting, stained glass, photographs, and three printed books from the Getty Research Institute, UCLA’s Special Collections, and the Huntington Library in San Marino. This is not enough to reveal the full range of the way medieval people imagined death, but the pieces do a remarkable job in illustrating several important themes. The show includes Biblical images such as the crucifixion and events in the Apocalypse of John, images of sinners being cast into the maw of hell, and illustrations related to Dante’s Inferno. The exhibition also offers an illustration of the parable of the rich man and Lazarus, several deathbed and burial scenes, and also a magnificent example of the popular legend of “the three living and the three dead” illustrated around 1480 in Bruges.

The legend, often depicted on church walls and in books of hours, tells of three well-off young men in the peak of health. The youths are often shown in their finery hunting with falcons, mounted or on foot. Suddenly, the three are confronted by cadavers—their own. The living are mortified and the mortified admonish the living to change their ways. In the Getty image, the horses recoil at the stench and fearful sight of the corpses. Each of the young men demonstrates a different response to the sudden confrontation with death. One shields his eyes. Another stares in horror. The third joins his hands in prayerful repentance. The illumination is a miniature with a large border where a skull is interwoven with flowers, a combination in keeping with the legend’s mixing of the wholesome and the ghoulish.

The show also offers a wonderful two-page illustration of the Gospel parable of the rich man and Lazarus. We see Dives, the rich man, feasting, with ladies on his right and left. Lazarus stands outside, begging, toes sticking out of his rotted shoes, a dog licking his sores, a servant glaring at him. At the bottom of that page, Lazarus is dead, his soul leaving his body escorted by a pair of angels. On the facing page, Lazarus is embraced by Abraham while Dives is being tormented by demons below. One of the demons wields a pitchfork. Two others are working Dives over with chains. The artist (working around 1510) has made sure that the technology of torment is up-to-date: yet another demon, this one with bat wings, is shooting Dives with a fiery flintlock. These illuminated pages are a fine example of the medieval artist’s delight in charming but inessential detail. There is a brook and a little fence, irises, and even a parakeet in a cage.

Taken together, the manuscript pages reveal much about the way the Middle Ages thought about death. The Dives and Lazarus illustration follows the Biblical narrative—down to the dialogue ribbons repeating Dives’s cry for mercy and Abraham’s response. This is a morality tale about the otherworldly justice that awaits us after death. The illustration of the three young men and their cadavers is very different. Here, the macabre confronts the living in the present. The legend is an admonishment and call to moral conversion, not a vision of the finality of divine judgment. The meaning of the macabre, however, goes beyond moral admonishment. The legend is about a chilling realization: those who had been hunting now suddenly realize that they have been the hunted all along. The present world is disrupted not from the heavens above, but from the grave below. At issue is not our fate after this life, but rather the inevitability of death itself with little sense of redemption or, for that matter, condemnation.

The later Middle Ages saw the rise of ars moriendi texts. Dying well—the other subject indicated in the exhibition’s title—required “cunninynge,” and these texts were to help the healthy and the moribund prepare. The ideal Christian death was peaceful and well planned, not sudden. Time was required to compose the soul. The temptations of unbelief, despair, impatience, pride, and avarice needed to be overcome.  The ars moriendi was integrated with the priest’s ordo visitandi. Many of these deathbed rites had the practical effect of managing the sinner’s anxiety over the power of demons to abduct the soul at the moment of death. In the exhibit’s illuminations, demons are visible everywhere, often fighting with an angel over the fate of the sinner’s soul. In one illustration, the attending priest has erected a crucifix before the dying man and steadies a long candle he has placed in the dying man’s hand. A small choir of angels has gathered above the man’s head. Wolverine-like demons are at the foot of the bed. The scene is both affecting and terrifying. In a nice touch, the artist has also included a bedpan.

The exhibition includes the marvelous “Denise Poncher before a Vision of Death,” dating from around 1500, which illustrates the ars moriendi. In the illumination, Death is depicted as a tall skeletal corpse, its flesh hanging like rags from its bones, astride a dead man. Two dying women with horrible sores on their faces swoon to the ground behind Death. Denise kneels with a prayer book in her hand and an indecipherable expression on her face. Is she looking at Death? Beyond Death? Is this an expression of terror or the rugged assurance of faith?

The show also has two wonderful pieces depicting burial rites. The ordo defunctorum consisted of confession, anointing, viaticum, and reading the Passion. After the death, there was the funeral mass with the body placed in a coffin in the choir of the church and laity outside the choir reading the office of the dead from the book of hours. The body was taken to the graveyard in the coffin, but through much of the Middle Ages, it was removed from the coffin and placed in the grave wrapped only in the shroud. This is because cemeteries were only temporary resting places. After a sufficient interval for the decay of the flesh, the bone were often dug up and placed in a “charnel house.” In the Getty exhibit, we see monks in the choir, gravediggers, and mourners. In the border, we see the deathbed with the tug-of-war between the angel and the demon, the prayerful wife, and St. Michael beating back the demon with a sword as the archangel hauls the naked soul up into his heavenly reward.

Missing from the exhibition is any example of the danse macabre or Totentanz. This is a loss. In the danse macabre, whether or not it is attributed to the ravages of the Black Death, we see the rejection of the notion of death as requiem. The dead do not rest. They dance. And they all dance together: the bishop with the butcher, the duke with the dunce, the old with the young. Like the illustrations in the exhibition, images of the danse macabre show how medieval society responded to death with a depth of imagination and confidence in ritual. What we see in the Getty exhibition is a far cry from the commercialized “American way of death” skewered by Jessica Mitford and Evelyn Waugh. The medieval images remind us more of a traditional New Orleans jazz funeral than of the banalities and denials of modern attitudes toward death. We cannot celebrate if we cannot mourn, and we cannot mourn if we are unsuccessful at imagining death. And if we are unsuccessful at imagining death, how will we be prepared for the dies irae to come? 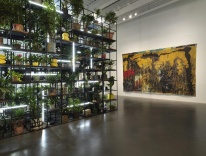 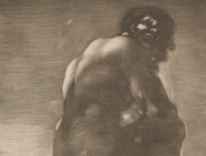 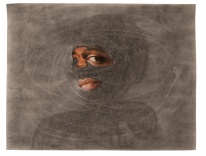