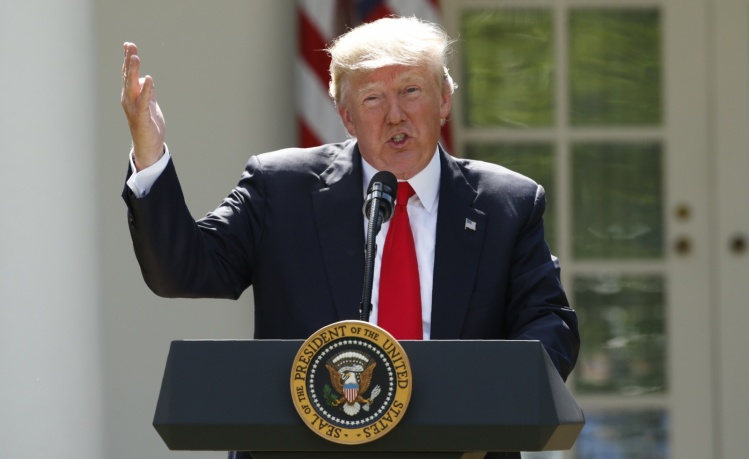 On a holiday weekend set aside to honor the American working class, it is hard to escape the sense that American workers find themselves exploited by our politics—and particularly by our president.

If wage earners could turn all the warm words they have heard into dollars, they would be rich. But they never receive the rights or benefits that are supposed to come their way.

Decade after decade, we engage in more or less the same arguments about economic justice, yet over the last fifteen years or so, the condition of laboring men and women has, by many measures, gotten worse.

In his campaign, President Trump promised the world to American workers, including a better and more generous health care system. Having broken his health care pledges, he now claims that he will live up to his vows on jobs and wages by—cutting corporate taxes.

Remember all those stories in 2016 about Trump being a different sort of Republican? It turns out he's the same old trickle-down conservative, only meaner: He also preys upon racial feelings and anti-immigrant sentiment, which is often cast as part of his “populism.”

There is absolutely nothing new about Trump's insistence that what's good for corporations will be good for American workers.

Here's what he said last week in a speech in Missouri: “We must reduce the tax rate on American businesses so they keep jobs in America, create jobs in America, and compete for workers right here in America—the America we love.”

Now if Trump hadn't pretended to be some kind of populist hero in 2016, his recitation of old Republican boilerplate would not be particularly interesting or troublesome. But it is maddening to see this man described as some great innovator when it comes to the interests of the left-out and forgotten.

There is absolutely nothing new about Trump's insistence that what's good for corporations will be good for American workers.
sharetweet

If you want to know how old Trump's talking points are, consider a debate broadcast by CBS Radio on April 11, 1948, between Sen. Robert A. Taft, lovingly known as “Mr. Republican” among conservatives of his day, and Walter Reuther, the legendary leader of the United Auto Workers union. (And by the way, wouldn't it be great if the media still broadcast debates of this sort?)

“Prosperity here depends upon a large percentage of the proceeds of our wealth being invested in new tools, new investments,” Taft insisted. “It takes about six or seven thousand dollars to create one new job at good wages today.” Those “job creators” have been central to the GOP's ideology for a long time.

Reuther was unpersuaded. “Unfortunately,” he asserted, “most everything that Congress has done in the past six or eight months has moved in the direction of giving more to the people who already have too much and taking away from the people who need more.”

“Senator Taft,” Reuther said at another point, “that is the same kind of economic theory that we practiced under Harding and under Coolidge and under Hoover.”

Taft, to his credit, did not present to be someone he wasn't. He believed in the ideas he was pushing. But anyone who expected Trump to take the American worker to a new place should be profoundly disappointed. As for Reuther's description of conservative economics, it seems as relevant now as it was sixty-nine years ago.

Trump moves us backward in other ways. Jared Bernstein and Ben Spielberg explained last week on The Washington Post's PostEverything blog that the president is using his executive power to undercut regulations on workers' pay, financial security, job safety, and also their right to form unions. Here again, Trump's actions belie his words.

Trump seems to think that if he goes after immigrants, picks fights about his border wall, regularly recites the words “law and order,” and assails “political correctness,” workers won't notice any of this. He'll keep attacking academic and media elites to distract from his service to financial elites. And there is so much focus on the scandals genuinely worthy of public attention that the substance of Trump's economic policies will be confined to the back pages of newspapers or the nether reaches of the internet.

Will it work? I'd insist that it's always safe to wager that over time, American workers judge politicians by looking at their paychecks, their working conditions, and the economic prospects of their families. Trump will discover the limits of his flimflam.

It was Walter Reuther who said: “There's a direct relationship between the ballot box and the bread box.” I still think he was right.