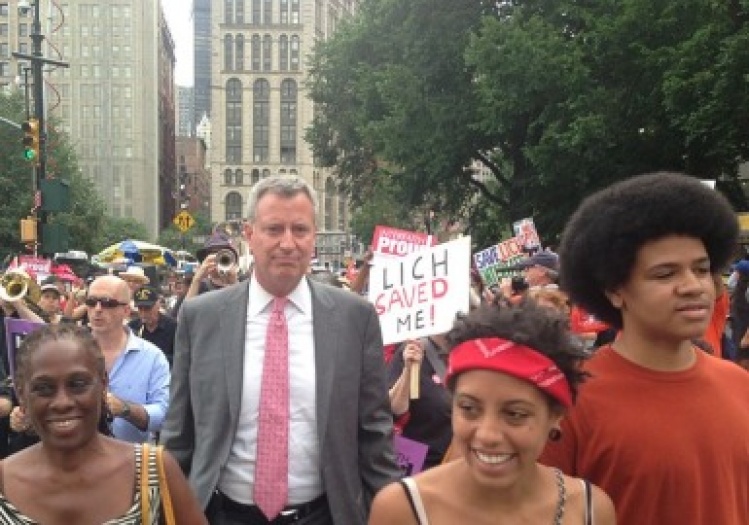 The center of gravity in American politics moved left in Tuesday’s off-year elections.

Republicans took a big step back from the tea party. An ebullient progressive was elected mayor of New York City. And a Democrat was elected governor of Virginia after campaigning unapologetically as a supporter of gun control and a liberal on social issues.

The one bright spot for Republicans, Chris Christie’s landslide re-election in New Jersey, was won precisely because Christie ran briskly away from the party’s right wing and developed a civil relationship with President Obama. His victory speech spoke of the need for politicians to go to places where they might be “uncomfortable” -- exactly where the tea party does not want to go.

And in the one direct intraparty fight over the GOP’s future, a tea party candidate lost a primary in Alabama to a more traditional conservative. A telling distinction between the victor, Bradley Byrne, and the defeated Dean Young: Byrne said that Obama was born in the United States; Young suggested the president was born in Kenya.

Young’s persistent “birtherism” is a reminder of how far right the American political discussion veered after the elections of 2009 and the midterms of 2010. The pendulum is swinging back.

And this week was not just a story of the Republican Party struggling to disentangle itself from extremism, or of the revival of moderation. The Democratic victories in New York and Virginia plainly marked the triumph of two different kinds of progressivism.

Terry McAuliffe may have won in Virginia as a middle-of-the-road, business-friendly champion of “jobs.” But he was also firmly liberal on gay marriage and abortion, and cast Ken Cuccinelli, his opponent, as a social troglodyte.

More than that: McAuliffe was outspoken against the National Rifle Association and in favor of a variety of gun-safety measures, including background checks. McAuliffe did not shrink from his F-rating from the NRA. He boasted about it.

His outspokenness was rewarded. He won the suburbs outside of Washington, D.C., overwhelmingly and built a large margin among women. The power of the gun-control issue should not be lost in the sometimes foggy talk about centrism. This should embolden supporters of sane gun laws.

In New York City, Bill de Blasio built the day’s second landslide on another sort of liberalism, a populist assault on rising inequality. In a victory speech that will be read as a manifesto for a new progressivism, de Blasio declared that inequality “is the defining challenge of our time.” He renewed his campaign call for modest tax increases on the best-off to finance education programs to give poorer kids a chance to join the ranks of the successful.

New York has a reputation as a great liberal city, and in many ways it is. But not since David Dinkins won in 1989 has it sent a Democrat and a staunch progressive to City Hall. The de Blasio experiment will be a test case for the nation.

Conservatives quickly sought to take the edge off their defeats on Tuesday by arguing that Cuccinelli’s attacks on Obamacare at the end of the campaign nearly allowed him to snatch victory from McAuliffe in a race that turned out to be closer than polls had predicted.

But the evidence for this is thin. In the Virginia exit polls, only 27 percent of the voters said health care was their most important issue, and they split 49 percent for Cuccinelli, 45 percent for McAuliffe. At a moment when media reports about Obamacare are almost universally bad, this narrow advantage is surprisingly positive news for friends of the Affordable Care Act -- especially since McAuliffe strongly and repeatedly endorsed using its expansion of Medicaid to provide insurance for Virginia’s near-poor.

Republicans would be wiser to pay attention to the fact that McAuliffe re-created the coalition which twice elected Obama. When Democrats lost Virginia in 2009, Obama supporters stayed home in large numbers. This time, the electorate was significantly more Democratic, and the African-American share of the vote rose sharply. In next year’s midterms, Republicans cannot count on the sort of Democratic demobilization that was so helpful to them in 2010.

To say that this election nudged the nation leftward is not to claim a sudden mandate for liberalism. But it is to insist that the center ground in American politics is a long way from where it was three years ago -- and that if there is a new populism in the country, it is now speaking with a decidedly progressive accent.