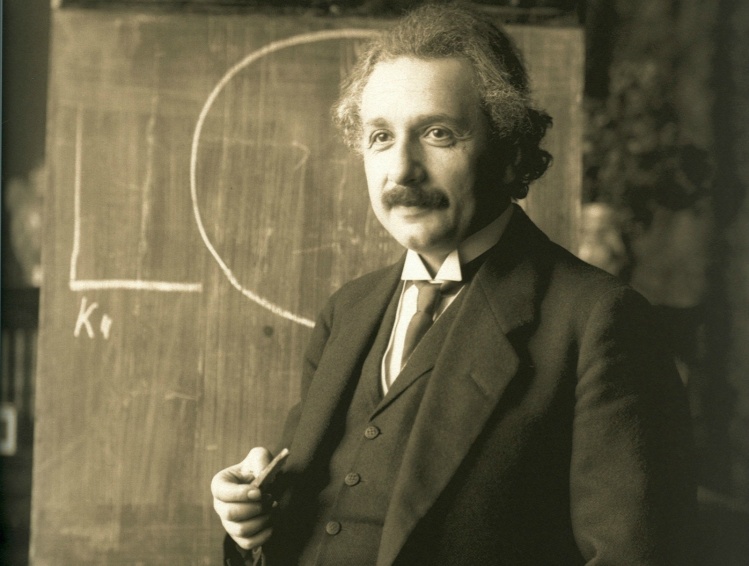 Albert Einstein during a lecture in Vienna in 1921

We could tell when spring came because then he wore sandals, instead of galoshes, on his daily walk from the small, clapboard, green-shuttered house to the Institute. In summer, sometimes, he would stop as I sprayed the lawn, clumsily wetting myself. "It’s only water," he would say, laughing. But he felt strongly about water. Once, walking back from the Institute, he spoke of the lowering of the water table as more serious for the world than even the threat of war: "If I were dictator I would charge for water, everywhere. If people had to pay for it they would not waste it so much. It cannot be replaced, the water table," he said.

He would always stop and jest with the children, and there are countless stories of how he did this small girl’s arithmetic or that small boy’s sums. He quipped with the old too-a surly eighty-year-old boasted on his birthday that Einstein had kidded him on his great age as he was "cleaning up in front." He could be very funny too-once, when I was in his house, he pointed out the closed screen door approvingly. "Very useful against cranks," he said.

"Cranks?" I asked. And he replied, "Yes. All my life I have been pursued by cranks. Once I was alone here with my daughter-our dear Miss Ducas was out. And my daughter was afraid of the man, so I came down, and he tried to argue and argue with me. Finally I got a chair and sat down, and still the man talked, separated from me only by the screen door. Suddenly I said, ’Look-look at that crayfish.’ ’Where?’ the crank said, startled. ’There, there.’ ’I don’t see any crayfish,’ he replied. ’Neither do I see what you are telling me,’ I said. And after that he went quietly away."

I met Dr. Einstein first at Oxford. He was staying with the Denekes. Marga, a musician, and her sister, a German professor, lived next door to Lady Margaret Hall. Dr. Einstein, for the Denekes’ sake, gave a talk to the girls at LMH; marvelously clear, even for such unscientific characters as most of us were. And the next evening he played the fiddle and Marga the piano, in the big music room at Gunfield. That was twenty-five years ago; but already we knew he was the greatest man in the world. "As great as Newton?" as later my wondering ten-year-old asked, after meeting Dr. Einstein for the first time. And my husband told him, yes.

The last time I saw Dr. Einstein we talked for an hour of "Augustine’s idea of time." Anthony Standen, a chemist, was with us, and said it was marvelous how Dr. Einstein spoke of the quantum theory in terms a chemist would understand. I could not follow them, so just stared at the beautiful face with the aureole of white hair, and the unforgettable eyebrows, and the unique pervenche blue eyes. The big window facing him looked out on a sunny lawn; the book-lined room was very quiet, when suddenly Dr. Einstein said something I understood: "If you accept the quantum theory, then macrocosms have no localization in space unless observed."

I asked, "Like God in the quod?" And he said, "Yes, there is much of Berkeley in the quantum theory." Then, after we reverted to Augustine’s idea of time, which Dr. Einstein said was subjective-one time for the butterfly, one for the tortoise, another for man-"But there is objective time, physical time" that the star’s light is measured by, he said. Anthony Standen asked him if when he said "der lieber Gott würfelt nicht" ("God does not play dice"), it implied he believed in God. But Dr. Einstein said, "That was in a private letter; it should not be quoted out of context"; and would not be drawn out. Yet, at a meeting at the Institute where there were only himself, Julian Huxley, Dr. Oppenheimer, and Dr. James Kritzeck, the "sole basis of agreement among the group was specifically defined as Jacques Maritain’s address before the Second International Conference on UNESCO at Mexico City in 1947."

The dear God indeed does not play dice; and he never made a more dedicated human being, or a more noble, saintly, and gentle neighbor than Albert Einstein. May the light even he could not measure shine perpetually upon him.

Tags
Death and Dying
From the Archives
Jewish-Christian Relations
Spirituality

Anne Fremantle, the prolific writer and editor, died in London on December 26, 2002. She was ninety-three. A convert to Catholicism, she became an American citizen after moving her family to the United States in 1942. From 1947 to 1958, she was an editor at Commonweal. She authored or edited more than a score of books, including poetry, fiction, and criticism, and held numerous university positions. She frequently appeared on radio and television, and served as secretary and vice-president of American P.E.N.