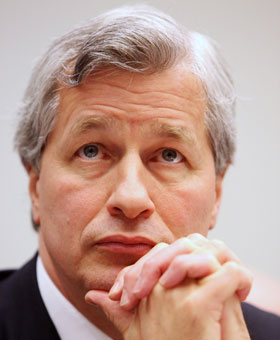 Last month Jamie Dimon announced that JPMorgan's chief investment office in London had lost at least $2 billion on the kind of complex derivatives that nearly sank the U.S. economy four years ago. Dimon has been a vocal -- and often truculent -- opponent of Washington's efforts to strengthen financial regulation. He's argued it's unfair to punish banks like JPMorgan Chase, which emerged from the 2008 financial crisis in good shape, for the mistakes of its rivals. And many Washington lawmakers seem to agree. JPMorgan's lobbyists have led efforts to delay, scuttle, or water down new regulations that would have prevented JPMorgan from losing so much, so fast on what was supposed to have been a "hedging strategy," but the lobbyists' efforts would come to nothing without the sympathy and willful amnesia of those who authorize and write the regulations.

Some have asked, What does it matter to Washington if JPMorgan loses a few billion dollars on bad trades? After all, the bank will still end up turning a nice profit this quarter; and, as Mitt Romney was quick to point out, JPMorgan's loss was someone else's gain -- that's how capitalism works. The answer is that the JPMorgan in JPMorgan Chase is gambling with Chase's federally-insured deposits. Already too big too fail in 2008, the bank has become even bigger since. (It is now the largest bank in the country.) If the losses had been bigger and JPMorgan Chase less able to absorb them, the government would have had to step in with another bailout. Big banks like JPMorgan Chase, whose failure would endanger the entire economy, are still trying to have it both ways: they want the size and security that comes with being a bank-holding company, but they also want the high profits that come from making -- and winning -- the kind of high-risk bets that hedge funds specialize in. Hence Senator Jeff Merkley's response when asked if he had a message for Dimon after JPMorgan's losses were revealed. "Yes. If you want to be the head of a hedge fund, be a hedge fund. Terminate your access to the Fed's discount window, terminate your access to deposits, and then we have no quarrel."Unfortunately, the law no longer requires Dimon to make this choice. Until it was repealed in 1999, the Glass-Steagall Act kept investment banking entirely separate from commercial banking -- and it worked: for more than sixty years there were no major financial crises. The so-called Volcker Rule, which is the centerpiece of the Dodd-Frank Act, is designed to have the same effect without actually splitting up the banks. In theory, it would keep a bank like JPMorgan Chase from trading for its own account (which is to say, with its depositors' money.) The provisions of the Volcker Rule are much more complicated than the Glass-Steagall Act, and are therefore harder to enforce on Wall Street and easier to subvert in Washington. But there is little chance of the Glass-Steagall rule being rehabilitated, and the Volcker Rule, despite its weaknesses, would be a vast improvement over the status quo. As the editorial in the June 15 issue of Commonweal puts it, the "danger now is that Dodd-Frank will suffer the same fate as Glass-Steagall."


Republican lawmakers and presidential candidate Mitt Romney have vowed to repeal it, and this is one campaign promise they are likely to keep. For them, and for too many Democrats, people like Dimon really are the masters of the universe: not infallible, perhaps, but smarter than politicians, regulators, and the ordinary consumers whose money they gamble with. The GOP is counting on voters either to forget what happened on Wall Street in 2008 or to remember it as a one-off event that no one could have predicted or prevented. But JPMorgans recent blunder is yet another sign that there are worse crises to come if Washington continues to let Wall Street write its own rules.

Herbert McCabe on the "institutional Church"