John le Carré’s ‘A Legacy of Spies’
By Katherine A. Powers
Books 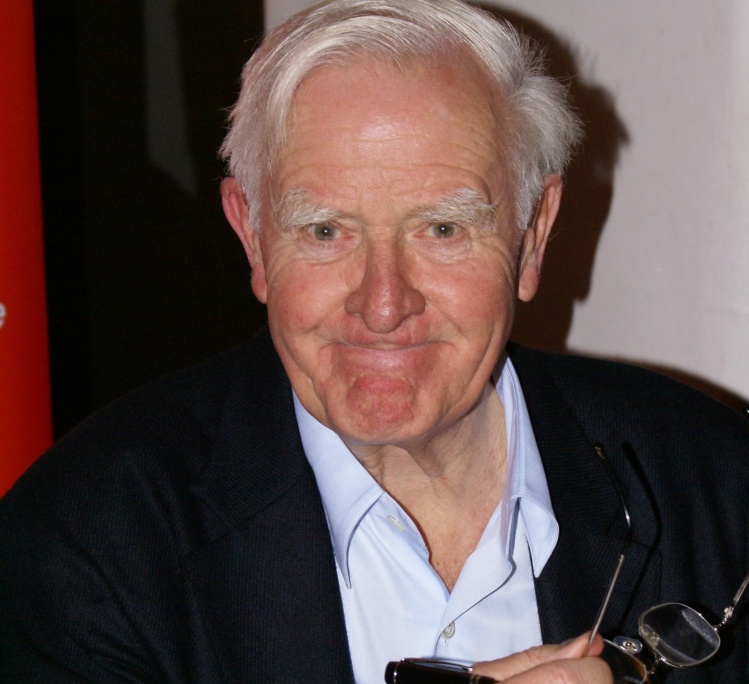 In his 2012 introduction to the fiftieth anniversary edition of The Spy Who Came in from the Cold, John le Carré asks the question that informs every one of his novels: “How far can we go in the rightful defense of our Western values without abandoning them along the way?” Assuming that “Western values” do not include the ends justifying the most cynical, even murderous means—a great assumption to be sure—the denouement of that novel is a shocking demonstration of a cold-blooded breach of faith. The novel, the third in which George Smiley appears, shows him for the first time sacrificing what might be considered a sense of personal honor and humanity to further the interests of a greater cause. His role in the plot that deceives and dooms British agent Alec Leamas and the innocent Liz Gold is small, but pivotal. When asked by the hoodwinked Leamas whether Smiley knows what’s afoot, Circus’s chief, Control, admits that that Smiley finds the scheme “distasteful,” but, he explains: “It isn’t a matter of morality. He is like the surgeon who has grown tired of blood. He is content that others should operate.”

We don’t like to think of the soul-tormented Smiley as Pontius Pilate; it comes too close to lumping him with the trimmers and temporizers in the Circus (the U.K.’s CIA) whom he despises. It would seem that le Carré didn’t want this verdict to stand—it belongs to the ruthless Control in any case. He developed the spymaster into a far more complicated character: a man who, in his feelings and deeds, represents the problem of English decency confronting ugly reality. Smiley’s muted reactions, his taciturnity and blandly ironical observations, are sometimes a response to the toll that the necessarily duplicitous business of spy craft takes on conscience and honor, but just as often that bland lack of affect is his refusal to be made party to his darkling trade serving as a cloak for the careerism, buck-passing, and servility of which Circus bureaucrats and politicians are such adept practitioners.

Smiley’s next appearance came in The Looking Glass War, where, though we find him urging a rival British spy outfit to abandon one of their agents in East Germany, he cannot be said to be washing his hands of the man’s certain death. He was not responsible for the jealous, self-regarding folly that had put an incompetent operator in this situation, and there is, in fact, no realistic way of getting him out. In the end, there is a poltroonish cover-up and the novel as a whole is a masterly study in lethal delusion—another of le Carré’s continuing themes.

The following three Smiley novels, which make up the brilliant “Karla Trilogy,” provide the fullest view of the Smiley predicament, of the man who is alert to every nuance of honor and decency feeling sullied by the dirty game he plays so well. (If you haven’t read these novels and intend to, you had better bail out right now—spoilers ahead.) In Tinker, Tailor, Soldier, Spy, Smiley cannot feel thoroughly triumphant in successfully unmasking Bill Haydon as the mole in the Circus, for it could be seen as his taking revenge on the man who had cuckolded him. As it happens, Haydon had done so precisely because he believed that Smiley was a man so fastidious about motive that he would balk at pursuing another for even the appearance of a personal reason. In the following two volumes, Smiley is disenchanted by both his victories. The Honourable Schoolboy ends in the capture of Karla’s agent Nelson Ko, but also in the death by American gunfire of freelance Circus operative, Jerry Westerby, and the Circus itself becoming the CIA’s poodle. Finally, in Smiley’s People, Smiley vanquishes his nemesis, Karla, turning him into a double agent; but it is a sickening victory, having been effected by threats to the man’s mentally disturbed daughter.

Is the great man still alive? It will take 250 pages to find out, and by that time some of us will be finding it difficult to care.
sharetweet

Smiley’s next appearance, in The Secret Pilgrim, is only brief and intermittent, and reported by an old Circus hand called Ned. The book, published as the Soviet Union was falling to pieces, is a ramble down the overgrown byways of the Cold War’s spy game, with Smiley interjecting occasional freshets of wisdom. It left the impression that this field was exhausted.

But no—and yes. For now, over a quarter of a century later, comes A Legacy of Spies, an exhumation of the operation at the center of The Spy Who Came In from the Cold. The story comes to us from an aging Peter Guillam, Smiley’s disciple and longtime sidekick. He has been summoned to the Secret Intelligence Service’s new headquarters, a monstrous building that has replaced the storied decrepitude of the labyrinth in Cambridge Circus. After much hard-charging affability from a slick legal functionary called “Bunny,” Peter is told that hitherto unsuspected offspring—Alec Leamas’s from an affair with a German woman, and Liz Gold’s from a youthful misstep—have surfaced and are claiming millions of pounds in damages for the deaths of their parents. They and their lawyer are threatening to bring the matter to court, which will lead to unfortunate public revelations and a probable parliamentary inquiry.

All the files on Leamas’s operation—called Windfall, we now learn—have gone missing. Nonetheless, stray bits of information found amid other material suggest something unsavory. Guillam is here to answer questions and, in true Circus style, to serve, if necessary, as a scapegoat in the absence of Control, who is dead, and Smiley, who is nowhere to be found. Is the great man still alive? It will take 250 pages to find out, and by that time some of us will be finding it difficult to care.

The novel inserts a few narrative gussets between le Carré’s first novel, Call for the Dead— where we first met Smiley as well as the vicious Hans-Dieter Mundt—and The Spy Who Came In from the Cold. Without revealing too much, I can say that we learn the story of how Mundt was turned and became a double agent for the Circus. We discover Peter Guillam’s involvement in setting up Alec Leamas with Liz Gold. And we also follow the long-ago adventures of Guillam in undertaking an unauthorized operation in East Germany to bring out an informant code-named “Tulip,” the source of information smuggled out by Karl Riemeck, who was shot on his bicycle at the start of The Spy Who Came In from the Cold. In other news, a chance remark drops the comforting moral bauble that Smiley had made amends to Karla for having so callously manipulated him. The winkling out of these stories is a laborious process and at one point veers into Hogwartian fantasy. It turns out that Millie McCraig, tweedy Circus snooper of yore, has remained, all unknown, presiding over an old safe house and archives in her own pocket of time.

A Legacy of Spies, which really cannot be understood without reading some of the predecessor novels, is not a match for them. It shows little of their virtuosity with degrees and species of betrayal or their subtle acerbity about class (which is, anyway, a register in decline in contemporary England), and it lacks the disturbingly dyspeptic mood that marked The Spy Who Came In from the Cold, the novel it glosses. Readers who hunger for Smiley will have to return to the previous novels, for there he shines eternally in his enigmatic, ageless, over-the-hill prime.

Katherine A. Powers is a freelance book reviewer and the editor of Suitable Accommodations: An Autobiographical Story of Family Life: The Letters of J. F. Powers, 1942–1963.