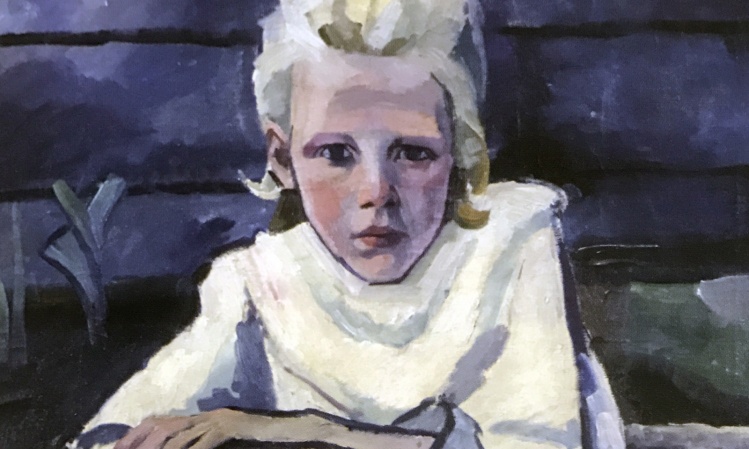 Her hands were small and knobby, with padded tips like a gecko. She was thin, pale, and freely freckled. She had a sheaf of white-blond, frizzy hair and intensely pale-blue eyes.

She’d sit under the table in the stale church basement after Mass, next to my folding chair, lacing the dusty floor with coconut from her donut. At times she’d reach for my large hand with her nimble ones, first spreading my fingers one-by-one, then smashing them back together with feral strength. She talked to herself ferociously.

Six, seven, eight years old when I knew her, she alighted on our parish doorstep from another state one day with her elderly father. Some whispered behind them; others questioned him. A story misted about eventually—mother gone or dead, poverty, father struggling; little girl out of control, no structure, needs help.

My firey little friend is dead. She had a life of shadows and dark things and unknowns.
sharetweet

Annie (not her real name) was one of a few children I met in my brief spell as a Sunday school teacher. I was fifteen years old, aggressively shy, often sweaty, overweight. I had bad glasses, few friends, a melancholy streak, and a growing dread of the adulthood a few dozen months away. Some kind women of the parish had invited me to help with the younger grades’ class. They were exceptionally patient with my teaching style, which involved blushing my way through the material while losing the focus of every tousled head at the table before me.

In spite of this, Annie lifted her cleft little chin and set her sights on me, and for the remainder of my high-school years was attached to me, physically, during those Sunday mornings, endlessly hanging off my hand or leg. I didn’t always know what to say to her, but I took comfort in her presence and she in mine, and we found a place among the weak coffee, gossip, and church shoes.

In some of her moods she tumbled and giggled with the other kids. One of her top teeth had grown in far ahead of the others and for a few months she flew about chasing her friends with one giant tooth, her blue-jay laugh, and a bushel of unbrushed curls streaking behind her.

In other moods she was surly and unkind. She would bite and scratch. If she was adhered to me and anyone came to take my attention, she would bark and growl, or meow and hiss at them while we spoke. She could keep it up for hours. When my new boyfriend visited from another town and I introduced her to him, she howled “My Kate!” and she would circle like a coyote whenever he was around.

Many, many Sundays saw her father lift her on his knotted shoulders to bring her home while she hit and screamed and gouged him.

I left for college, my boyfriend and I married a few years later, and my parents moved. My sister still lived in the area, and every few years Annie’s name would come up, and I’d marvel that my fierce, lovely girl was now a high school graduate, a farmer, a wife, a mother.

A few weeks ago my sister visited on one of the first warm evenings we’d had in eight months. As the last fingers of orange sunlight slid around the corners of the windows, she spun her cup round in her hands and asked, “Did you hear about Annie Smith?”

Maybe it was how she said it, but I knew that she had died. My lungs refused air as the facts emerged. Drug addiction. Runaway. Overdose. Taking donations.

My firey little friend is dead. She had a life of shadows and dark things and unknowns. I don’t know her husband or child or the grief and anger they are drenched in. In a real way, I didn’t know her at all.

But part of me has this half-born daydream to drive back to my hometown this weekend. To implore an undeserved second of their time. To look them straight on and say, “I loved her.” And when I felt myself most unloveable—she loved me.

Kate Madore is a freelance writer and pianist. She lives and works with her family in coastal Maine.