Why Americans Love the Pope 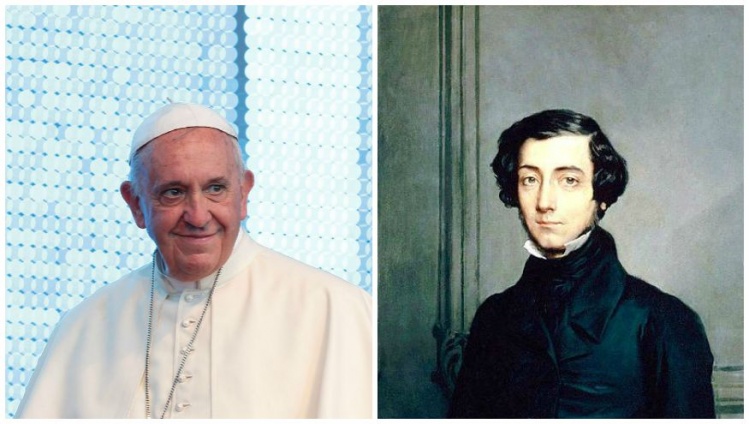 Don't worry, I won't be parsing the latest opinion polls, or riffing on the recent outpouring of Francis-related commentary. (For those who might have missed them, see Grant Gallicho's round-up of examples of Francis Derangement Sydrome; you also should read Paul Baumann's thankfully sober-minded preview of the pope's visit.) Though I couldn't resist checking in on Pope Francis's arrival in Cuba, I found myself avoiding the news as much as possible and turning to a previous Catholic visitor to our land, the French aristocrat Alexis de Tocqueville.

Readers of Tocqueville's Democracy in America will know that text is divided into two volumes. The first resembles travel writing in some ways; while much more than that, you get a feel for some of what Tocqueville saw here. He and his travel partner Gustave de Beaumont spent nine months in America in 1831, and in the first part of Democracy Tocqueville proceeds as an amateur sociologist of sorts. Tocqueville observes townhall meetings, talks to leading citizens, muses on our system of government, and praises our instinct for associations. He also seems fascinated by how Roman Catholics were faring here.

Among many other things, he notices that there were more than a million Roman Catholics in the United States when he arrived (about fifty years before his visit, he writes, the Irish "began to pour a Catholic population" into this country) and that, contrary to expectations, they formed "the most republican and democratic of all classes in the United States." At least in this country, Tocqueville observed, Catholics were a poor minority – but that turned them into believers in equality. Catholics understood that if rights started to be enforced selectively, they would be on the losing end of any such arrangement. Tocqueville tactfully notes that the experience of arriving here as vulnerable immigrants meant that Catholics were "led, perhaps in spite of themselves, toward political doctrines which, maybe, they would adopt with less zeal were they rich and predominant."

In other words, Tocqueville asked, why was a religion so identified with the Old World succeeding in the New? Why was the equality-loving United States a place where a "hierarchical" religion flourished? Weren't we, to borrow Jefferson's biting phrase, a place consciously founded on the rejection of "monkish superstition"?

Here's one reason Tocqueville saw Catholicism as a friend to democracy, and why it was thriving in America:

I think one is wrong in regarding the Catholic religion as a natural enemy of democracy. Rather, among the various Christian doctrines Catholicism seems one of those most favorable to equality of conditions. For Catholics religious society is composed of two elements: priests and people. The priest is raised above the faithful; all below him are equal.

In matters of dogma the Catholic faith places all intellects on the same level; the learned man and the ignorant, the genius and the common herd, must all subscribe to the same details of belief; rich and poor must follow the same observances, and it imposes the same austerities upon the strong and the weak; it makes no compromise with any mortal, but applying the same standard to every human being, it mingles all classes of society at the foot of the same altar, just as they are mingled in the sight of God.

Catholicism may dispose the faithful to obedience, but it does not prepare them for inequality.

In the second volume of Democracy in America Tocqueville approaches matters more theoretically. Or rather, he teases out the deeper meaning of what he's previously observed. Though still tethered to his experiences in America, Tocqueville looks ahead to where democratic life was going – he ponders democracy as an "ideal type" in comparison with aristocracy. His concern turns toward the way equality will impinge on all areas of our life, from the way we write history to the relations between men and women.

In these later passages Tocqueville again turns to Roman Catholicism, amidst other reflections on the spiritual lives of Americans. This time the specific impact of the immigrant experience seems to interest him less. Again, he rather straightforwardly articulates what's on his mind: America is "the most democratic country in the world," yet also the country in which "the Roman Catholic religion is making the most progress." This, Tocqueville writes, "seems at first sight surprising."

Here's part of Tocqueville's reformulated attempt to explain why it shouldn't be:

We must here make a clear distinction between two things: equality makes men want to form their own opinions, but it also gives them a taste for and a conception of a power in society which is unique, simple, and the same for all. People in democracies are therefore very prone to any such authority, but if they do consent to submit to any such authority, they want it to be at least single and uniform. Religious authorities which do not all stem from one center naturally shock their intelligence, and they find it almost as easy to assume that there is no religion as that there are several.

At the present time, more than in any previous age, we find Catholics turning into unbelievers and Protestants turning Catholic. Catholicism seen from the inside seems to be losing, but seen from the outside, to be gaining. There is a reason for this.

Our contemporaries are naturally little disposed to belief, but once they accept religion at all, there is a hidden instinct within them which unconsciously urges them toward Catholicsm. Many of the doctrines and customs of the Roman Chuch astonish them, but they feel a secret admiration for its discipline, and its extraordinary unity attracts them.

If Catholicism could ultimately escape from the political animosities to which it has given rise, I am almost certain that that same spirit of the age which now seems so contrary to it would turn into a powerful ally and it would suddenly make great conquests.

Readers should feel welcome to appraise Tocqueville's speculation in the comments.