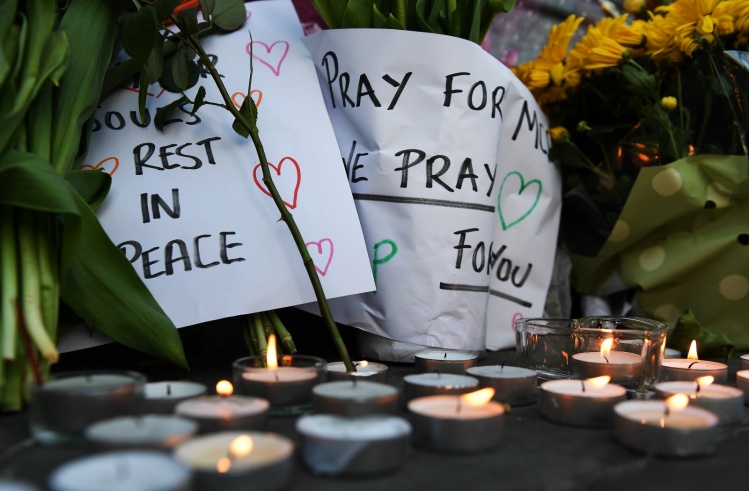 Candles and notes are seen during a May 24 vigil in Manchester, England (CNS photo/Andy Rain, EPA)

St. Paul instructs Christians that the greatest of the theological virtues is love; but it’s also true that the hardest of them is hope. “It’s hoping that is difficult,” confirms the French poet Charles Péguy. “And the easy path is to despair.”

Living through the past year certainly supports that judgment. Even those who took the most dire view of how Donald Trump’s ascension to high office might play out couldn’t have been fully prepared for the cumulative force of Trump’s incompetence and cruelty, how experiencing the Trump presidency, day after day, would feel. The combination of an unstable, wicked man in an office of vast powers inexorably generates dread and depression—aided, of course, by Twitter, Facebook, cable news, and all the other ways we are sometimes overwhelmed by what’s happening.

War with North Korea looms. The Democrats are in disarray. Every day something disturbing seems to unfold, pushing yesterday’s disturbing news out of the headlines and most of our minds. It all becomes a blur. But the present crisis goes far deeper than U.S. politics. Brave women have come forward in recent months to expose the sexual misconduct of powerful men, a long-overdue moment of reckoning surely unleashed, at least in part, by the fact that a man caught bragging about sexual assault now occupies the White House. The destruction of the planet continues apace; the increasingly obvious consequences of climate change are unfolding across the globe. The far right is ascendant in the United States and is gaining strength across Europe. And the church, which should provide an alternative to such troubles, too often reflects the divisions convulsing the broader culture.

If it feels like the End Times, it’s not. But it is apocalyptic, a season of unveiling and revelation, when what lurked in the darkness is brought into the light and what quietly festered becomes fully known. The precariousness of a decent life, the anxieties and fears of those on the margins of society are apparent in new and convicting ways.

In the midst of suffering and anxiety, moving forward can feel impossible.
sharetweet

Perhaps this is why Pope Francis insists that “divine mercy is the foundation of Christian hope.” In the midst of suffering and anxiety, moving forward can feel impossible. The guilt and knowledge of being implicated in structures of sin can feel overwhelming. The future, toward which hope is always oriented, seems bleak. But mercy means that life is not a dead end, that our failures are not final. Transformation can happen and healing is possible. Grace can break through. A different way of living together, more compassionately and generously, is not beyond reach. Not long ago, the pope reflected on what hope means in this way:

Hope is the virtue of a heart that doesn’t lock itself into darkness, that doesn’t dwell on the past, does not simply get by in the present, but is able to see a tomorrow. Hope is the door that opens onto the future. Hope is a humble, hidden seed of life that, with time, will develop into a large tree.... A tiny flicker of light that feeds on hope is enough to shatter the shield of darkness. A single individual is enough for hope to exist, and that individual can be you. And then there will be another “you,” and another “you,” and it turns into an “us.” And so, does hope begin when we have an “us?” No. Hope began with one “you.” When there is an “us,” there begins a revolution.

For Francis, those flickers of light mean living in solidarity with the poor and hungry and vulnerable. In that same talk, he holds up the parable of the Good Samaritan as expressing “the story of today’s humanity,” when the paths of so many are “riddled with suffering, as everything is centered around money, and things, instead of people.” Too often the respectable and comfortable are “leaving behind thousands of human beings, or entire populations, on the side of the road.” But there are others, those “who are creating a new world by taking care of the other, even out of their own pockets.”

Christian hope, as this season reminds us, is eschatological—it is not finally a political slogan or expression of mere optimism. But that should also serve to embolden the faithful to build a better future. Hope is not dependent on any political order, any president or pope. Regimes rise and fall, but it is human beings who die and are resurrected. There are always neighbors to love; there are always the suffering who need friendship and grace. The possibility of joining with others to fight for the least of these remains. As Francis underscored, “No system can nullify our desire to open up to the good, to compassion, and to our capacity to react against evil, all of which stem from deep within our hearts.” As long as that desire exists, hope endures.