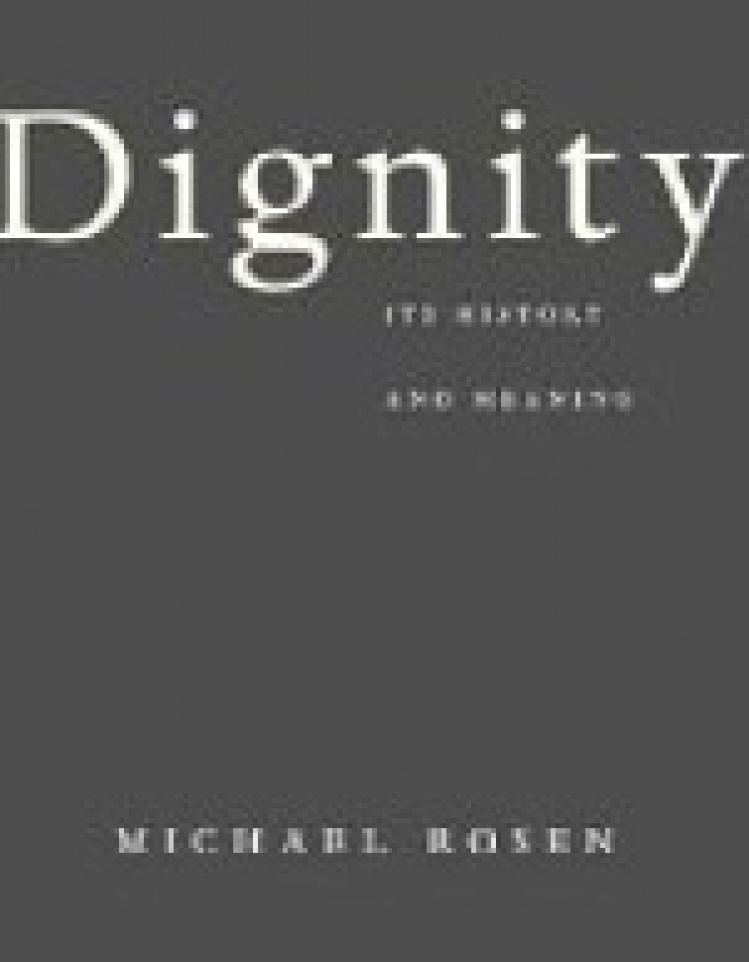 The Universal Declaration of Human Rights invokes it. So do the Geneva Conventions, the German constitution, and major U.S. Supreme Court cases. It is central to both the Kantian moral tradition and Catholic social thought. And along with cognate concepts, it’s the favored principle of a broad range of causes: for the prenatal child’s right to be born and the ailing geriatric’s right to be killed; for looser immigration laws and tighter labor laws; for the regulation of pornography, prostitution, and hate speech; and libertarian resistance to the same. No concept has been more central to human-rights thought and advocacy than dignity.

So, if there is any philosophical concept on which we need insight and clarity, this is it. Yet most contemporary thinkers only bring it up to put it down. For the philosopher Ruth Macklin, “dignity is a useless concept”; Steven Pinker calls it “squishy, subjective” and “stupid.” Most thinkers today can’t even be bothered to show it abuse. And most of its few favorable treatments are too academic to have much effect on public debates.

Into that unfortunate breach steps Harvard Professor of Government Michael Rosen. In Dignity: Its History and Meaning, Rosen delivers an engaging reflection on the pedigree, politics, and promise of our moral and legal culture’s go-to concept. Given the topic’s salience, Rosen aims to keep the book widely accessible. His effort succeeds, but to uneven effect. Dignity is most helpful as an introduction to its title concept’s scattered origins and conflicted meanings and applications. But his affirmative moral arguments about what human dignity is and what it requires, while occasionally illuminating, are finally unpersuasive.

Unlike much academic philosophy today, the book is properly rooted in history. Starting with the ancient world, Rosen pays close attention to the various things “dignity” has meant. To begin with, it has meant social rank, which varies from one person to the next. But since the time of Cicero, if not earlier, it has also signified something that all human beings (and only human beings) have equally. The third sense of “dignity” denotes the special value that something has “on account of itself,” in Aquinas’s language—or, in Kant’s, the “internal” value that makes a thing “irreplaceable.” And then there is “dignity” as a certain aesthetic quality of behavior: elegance, poise, or, for Schiller, “tranquility in suffering.”

This taxonomy is crucial for avoiding errors, but Rosen himself sometimes overlooks it. Thus, he notes that Leo XIII affirmed variously nested authorities for social order, and infers from this that the nineteenth-century pope denied what the late-twentieth-century Catholic Church affirmed—namely, the equal dignity of all human beings. But is social authority not compatible with a more radical equality of dignity? Does all government violate equality? Indeed, if belief in this more radical sense of dignity as equality is indicated by belief in the inviolability of certain rights and corresponding duties, then surely the Catholic Church is among the oldest and most consistent defenders of dignity. From its inception, the church has defended certain moral absolutes—for example, against intentional killing of innocents—as minimum requirements of respecting the human good.

But just how is it that dignity and human rights relate to each other? Rosen spends the rest of the book examining this question, as a political and philosophical matter. His main quest is for an account of dignity that explains three things: first, what it means that we have equal and inviolable dignity; second, how this dignity gives rise to inalienable rights; and third, just which rights it gives rise to.

At the start of this search, the book hits its philosophical stride. It raises hard questions about a modern reading of Kant, according to which respecting a person’s dignity means respecting his goals just because he has chosen them. This, Rosen points out, would make it hard to account for the value and rights of human beings who cannot, here and now, make choices. It would also make others’ goals the only constraint on our own, leaving no room for moral absolutes. Finally, it couldn’t explain the value of the person herself except by circular appeal to her own choice.

To reinforce the difficulties, Rosen tries to apply this and other conceptions of dignity to hard moral cases—like the choice of whether to shoot down a hijacked plane or risk more loss of life on the ground—and finds them all wanting. None, he thinks, can explain just what, concretely, dignity calls for, exactly what rights it bestows on those who have it. But it’s here that Rosen’s book could use more analytic rigor. His rejections of various conceptions of dignity as unworkable or implausible read more like reports of his conclusions than summaries of his reasoning. All this leads him to suggest that in interpreting and applying legal requirements of respect for dignity, we put more emphasis on the duty to treat others with dignity: that is, in ways that express respect. He ends by investigating this duty.

Because he thinks we owe it to corpses, he thinks it isn’t owed only to human persons. Nor do we owe it to corpses just because they used to be persons, for Rosen thinks we should also treat with dignity the corpses of fetuses, whom he considers sub-personal. On these intuitions—that we owe fetal as well as adult corpses respect, and that the former never were persons—Rosen hangs his highly idiosyncratic analysis of the duty to treat with dignity. As he concludes, “We have a duty to treat a corpse with dignity just because one of the ways in which we have a duty to act is that we should perform acts that are expressive of our respect.” He clarifies that these are not duties to other people, or to former people, or even to ourselves. They are not grounded in the value of anyone’s “humanity” at all.

Rosen owes us strong reasons to believe such a novel account. But the reasons he gives for believing his view and rejecting its alternatives are spotty. We come in at the tail end of a thoughtful man’s internal monologue: he hasn’t the time or interest to recount what we’ve missed, but he’ll let us overhear the conclusion. Perhaps this is the result of Rosen’s worthy desire to serve a broad audience, but it ends up undermining that service.

Still, Rosen’s hasty philosophical search and questionable conclusion is intellectually instructive. It was guided all along by the assumption, articulated but hardly examined, that a good theory of dignity would explain not only how we all have it (equally), and how it grounds certain rights, but which rights it grounds. Here at least Rosen’s book isn’t novel at all, for this is an errand on which modernity has been embarked since Kant.

But is it, finally, a fool’s errand? At one point Rosen quotes a passage from Veritatis splendor that can be read to imply as much:

It is in light of the dignity of the person—a dignity which must be affirmed for its own sake—that reason grasps the specific moral value of certain goods towards which the person is naturally inclined. And since the person cannot be reduced to a freedom which is self-designing but entails a particular spiritual and bodily structure, the primordial moral requirement of loving and respecting the person as an end and never as a mere means also implies, by its very nature, respect for certain fundamental goods, without which one would fall into relativism and arbitrariness.

Here John Paul II suggests that, while human dignity—whatever it is—grounds our general moral obligation to serve human goods, these human goods depend on humanity’s nature (its “particular spiritual and bodily structure”). We have obligations to any being with dignity, but just what we owe it is a separate question, a question about what fulfills its nature.

Kant—and with him, Rosen—tried to tease out human rights from whatever feature makes us subjects of rights at all. Another approach—that of Aristotle and Aquinas, as well as John Paul II—would treat these as separate inquiries. It is one thing to say what would harm a certain being, quite another to say which beings we have duties not to harm. This much we can learn from Rosen’s survey of attempts (including his own) to do without that distinction.

Sherif Girgis is a philosophy PhD candidate at Princeton University and a JD candidate at Yale Law School. With Ryan T. Anderson and Robert P. George, he is the author of What Is Marriage? Man and Woman: A Defense.