As we were tidying away the Christmas decorations, marking Twelfth Night in this somewhat tedious, somewhat reflective manner, I could not put by for the season the poem that follows.  Southwell, as you probably are aware, was an English Jesuit Martyr, executed in 1595 as a traitor for his missionary work among English Catholics in the reign of Elizabeth I. How the times seem to frame the meaning of the Incarnation.

THE BURNING BABE.
By Robert Southwell

As I in hoary winter's night stood shivering in the snow,
Surprised I was with sudden heat which made my heart to glow ;
And lifting up a fearful eye to view what fire was near,
A pretty babe all burning bright did in the air appear ;
Who, scorchëd with excessive heat, such floods of tears did shed
As though his floods should quench his flames which with his tears were fed.
Alas, quoth he, but newly born in fiery heats I fry,
Yet none approach to warm their hearts or feel my fire but I !
My faultless breast the furnace is, the fuel wounding thorns,
Love is the fire, and sighs the smoke, the ashes shame and scorns ;
The fuel justice layeth on, and mercy blows the coals,
The metal in this furnace wrought are men's defilëd souls,
For which, as now on fire I am to work them to their good,
So will I melt into a bath to wash them in my blood.
With this he vanished out of sight and swiftly shrunk away,
And straight I callëd unto mind that it was Christmas day.

The boldness of the imagery and its torturing violence frames the Nativity as the scene of Passion and Redemption. The fiery purification of the furnace of love smelts the gross ore of mortality to passionate perfection, and thence to the washing in Baptismal blood. The poet’s heart glows in pale yet predictive affirmation (Southwell was hanged, drawn and quartered after much torture) of the fire of Divine love that consumes in Redemptive suffering – consumes not the Babe but “defiled souls” to “work them to their good.”
The consolations of the Nativity scene are displaced with the demands, freely fulfilled, of Divine Love. Though the Babe of the poem “swifly shrunk away,” the force of the vision burns daily. 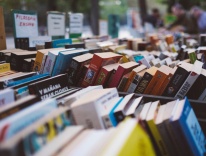